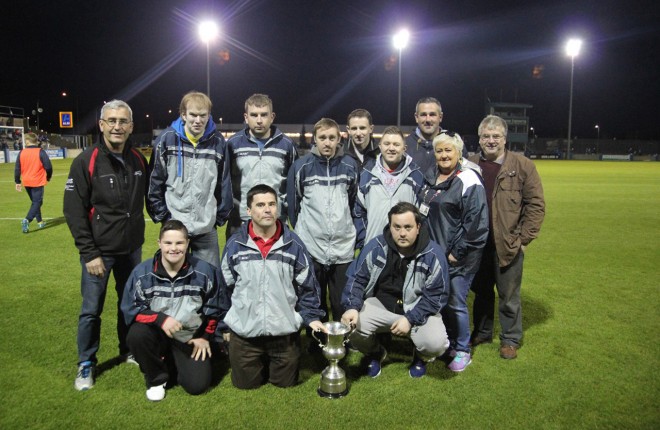 IT’S been an incredible run of form for the Donegal Special Olympics team football team who recently won the National Special Olympics Football League for a seventh time in nine seasons. On top of that they also won the Cup 5 times over the same period.
This season it all came down to the last match of the season in a “winner takes all” game against Dublin outfit Sporting Fingal. But the Donegal lads were not going to slip-up on the last day at The Curragh and ran out convincing winners with a 6-2 win.
This was a difficult season for the North Westerners as most of their matches were played away from home but they ground out some hard points away to teams such as Limerick and Dundrum. Their home form was excellent especially against Bray and their last game seeing off Sporting Fingal.
For manager, Termon man Mike Leavy, whose son Michael plays on the team, this was just reward for all the hard work and commitment the squad has put in all season. Based in Letterkenny where they train, many of the team have to travel from as far away as Gweedore and Donegal Town.
The team played a challenge match against Donegal Garda FC in Ballyare a couple of weeks ago after which Garda Fergus McGroary presented team captain Noel O’Donnell with the National League Cup.
They were also special guests at Finn Park last week where they met Harps legend Stephen Parkhouse.
Finn Harps have been a tremendous support to the club for many years now. Donegal Special Olympics FC would like to thank all who helped them through this successful year, especially the Donegal League clubs who facilitate their home matches at Ballyare, Lifford and The Curragh.
Should anyone like to volunteer with the club as a coach, please call Seamus on 087 2395101.