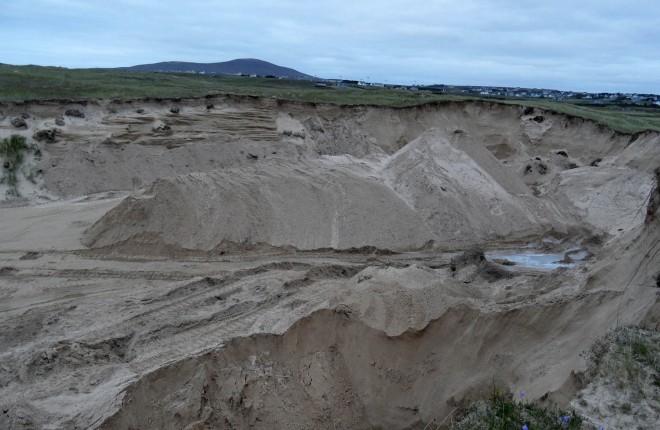 The scene at Port Arthur Beach from where thousands of tonnes of sand were removed in recent weeks.

By Cronan Scanlon
THE alleged illegal removal of thousands of tonnes of sand from a protected beach in Gweedore is being investigated by Donegal County Council.

A spokesperson for the local authority confirmed that the “unauthorised development” at Port Arthur has been inspected following reports received in recent days and that enforcement action has been initiated.

“The site is being monitored with a further inspection planned for this week. No further comment will be made pending a decision in this case,” the spokesperson said.

A representative of the National Parks and Wildlife Service (NPWS) also confirmed it was aware of the works at the beach which is a designated Special Area of Conservation (SAC).

A local source, who did not wish to be named, said diggers arrived on the site last week and began removing large chunks of the sand dunes.

The work continued for a number of days and involved thousands to tonnes being removed in large lorries to be used on football pitches.