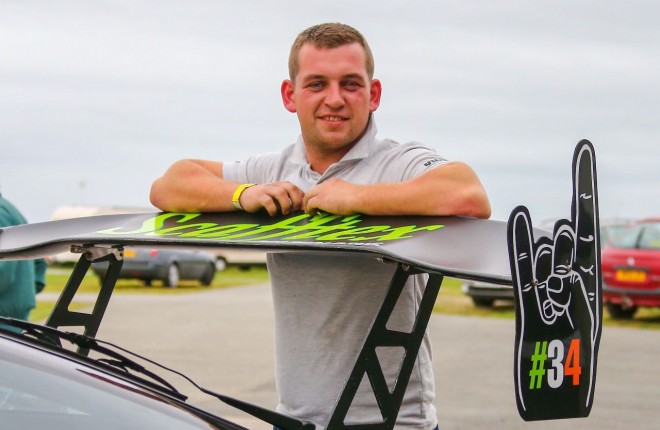 BY HARRY WALSH
KEILAN Woods returns home this weekend to compete at the Jap-Fest and Irish Drift Championship at Mondello Park. It marks the Kent based Convoy man’s first appearance in Ireland this year.
His team have made the journey over from the UK, and Anglesey in particular where Woods was taking part in the prestigious British Drift Championship last weekend at the Welsh venue.
He has dovetailed his British Championship campaign with outings too in the specialised King Of Europe Drift events, where he has shown superb speed and skill in his self prepared Nissan 180, a car newly built for this season. The 600hp machine has seen Woods qualify at all the rounds the team has competed on, and he heads to Mondello Park this weekend full of confidence after a strong performance in Wales.
“Coming back home to Ireland this weekend it really important for myself and the team. I am proud to be the only Donegal Pro-Drifter in the British Championship and it will be so good to see a lot of the family make their way down from Convoy and Letterkenny to cheer us on this weekend,” he said.
Woods has the support of family in the UK, with his father Willie, also a native of Convoy, taking on the role of team manager and advisor to Keilan. Both father and son work at the Lydden Hill race circuit in Kent, with Willie the circuit manager and Keilan in his role as the Circuit Maintenance Manager.
It is not just Convoy that is represented at Mondello as the duo carry sponsorship from Lifford businessman Geoffrey Dolan and his company Scafftex Scaffolding. Dolan himself is no stranger to motorsport, and still competes himself in Rallycross and Rallying when time allows, and Woods is grateful for the support.
“It’s really good to have the likes of Scafftex and Geoffrey on board for the year, and helping us to compete, so this weekend it would be really nice to get a good result by way of a thank you,” he said.
The results this year have been good for Woods, with consistency giving him and the team a top twenty overall position so far in the British Championship.
The action at Mondello runs Saturday and Sunday with the main action on the Sunday.