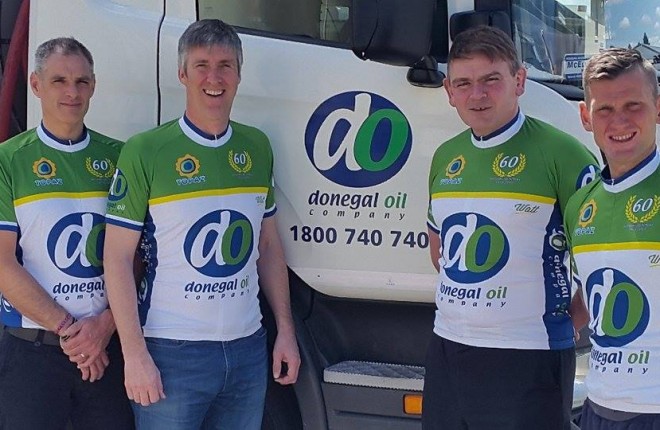 FOUR well-known Donegal lads have teamed up with local company Donegal Oil Company to form Team Donegal Oil. Gavin Harris, Arthur McMahon, Michael McGarvey and Sean McFadden will take to their bikes and take part in the Race Around Ireland.

They will join cyclists from all over the world on Sunday 30th of August 2015, at Trim Castle, County Meath for the 7th Race Around Ireland and The Irish Ultra Challenge. This event is 2100km long and is ranked the highest event in the UMCA World Cup calendar and these boys from county Donegal are certainly gearing up for the challenge. Training hard with their own sports and taking part in many adventure races & events over the last number of years makes them no strangers to this type of non-stop cycling challenge. The four boys will take part in the relay cycle, which will be non stop 24 hours a day! They have 5 days to finish the cycle relay and hope to have it completed in less than 4 days, 1 days ahead of the allotted time. The Race around Ireland is listed as one of the world’s toughest endurance events but also allows amateur riders to compete with elite riders from all over the world!

These Donegal lads are no strangers to cycling and sport, especially Sean McFadden from Letterkenny who has achieved hugely successful triathlon, cycling, adventure racing and running wins. Sean was winner of The Race 2015 and runner up of The Race 2014, he finished top 3 in Ras Mumhan, An Post Ras 2 years in row and Lough Keep Triathlon Winner 2014. Arthur McMahon played rugby till he was 36 and after taking part in the Donegal Coastal Cancer Challenge in 2013, to raise money for the Donegal Hospice after his mum sadly passed away from cancer, he has been taking part in many adventure challenges ever since and admits himself he is “hooked”. Michael McGarvey, originally from Falcarragh, living in Letterkenny is another avid rugby player with Letterkenny Rugby Club, he is training hard for this event and regularly takes part in local charity events, just last week he participated in the WAAR, Wild Atlantic Adventure Race. And last but not least, Gavin Harris from Convoy, the teams Ironman has been taking part in cycling races since 2007 and is delighted to be part of “Team Donegal Oil”.

Not only is this a challenge for themselves personally as Team Donegal Oil but they are delighted that they can also raise money for Donegal’s Austism Family Support Group. The Donegal Autism Family Support Group was set up nine years ago to support parents, families and individuals on the autism spectrum. All the members of the group all work on a voluntary basis and their aims are to support families and to offer children the opportunity to take part in a number of different activities without being judged. They are actively raising autism awareness within their children’s community. “We are delighted that we can support The Autism Family Support Group” a very hard working worthwhile charity who do great work under the radar and they deserve support” say’s Arthur McMahon.

COFFEE MORNING
In the build up to The Race Around Ireland they have organised a Coffee Morning in Donegal Oil, Port Road, Letterkenny tomorrow morning, August 26 at 10am in aid of the Donegal based Autism Family Support Group. And would love to see as many people there as possible.

You can follow Team Donegal Oil online on their Facebook page -https://www.facebook.com/TeamDonegalOil and thank you to everyone help them raise some money for their charity however small or large and who knows for these Donegal lads, perhaps the next challenge will be to Race around America?

You can donate to the charity here.