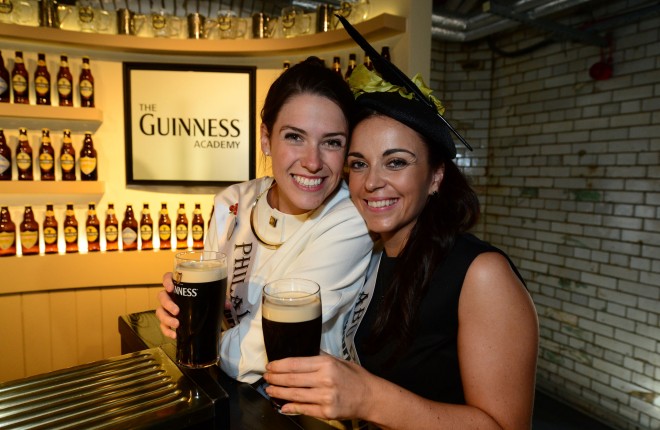 BY SEÁN P. FEENY
DONEGAL will once again be glued to the television screens next week as one of its daughters takes to the stage of the Rose of Tralee International Festival.
The festival beings today (Friday) and runs until Tuesday, August 18.

The festival incorporates five days of street carnival, in addition to Rose of Tralee TV show broadcast live on RTÉ from the Festival Dome on Monday and Tuesday night, hosted by popular broadcaster and Kerry native Daithi Ó Sé.

Deirdre Ward (27) from Bruckless is this year’s Abu Dhabi Rose and has family around the county who will be supporting her from Killybegs to Letterkenny, Milford and Gortahork.
A kindergarten teacher and living in the United Arab Emirates (UAE), Deirdre is the daughter of John and the late Breda Ward who was, in fact, a native of Kerry.
“I got the best of both worlds,” Deirdre laughed. The Abu Dhabi Rose has a poem which she is hoping to perform in memory of her mother, if time allows it during the live broadcast.

Deirdre said not only is she proud to be presenting Donegal at the festival, but of course her current home of Abu Dhabi.
“People are very intrigued about my life there and I am really excited to tell them about it, becoming the Abu Dhabi Rose has really been the icing on the cake of my time there, so far.”

Donegal Connections
Another Rose who looks forward to presenting her Donegal roots on stage, is Mairead Comaskey (27) from Philadelphia.The Philly Rose is not stranger to the Letterkenny area with her mother Breda being a native of the townland of Rathdonnell. “I’m in Donegal all the time and was actually just there in May and went out to Termon where I visited my grand grandmother’s home,” she said.

Mairead’s father Mickey is a native of Cavan and she said she is looking forward to having lots of family from both counties support her in Tralee. “I’m meeting so many nice people here this week and I am really looking forward to the weekend when all the family arrive down from Donegal and Cavan,” she said. Mairead currently works as a culture specialist for an investment company, Vanguard Group, ‘globalising their recognition programmes’.

According to Boye Sports, the bookies’ favourite is Wicklow Rose Megan Swart who is now priced at 12/1 while Abu Dhabi Rose Deirde Ward stands at 8/1 and Philadelphia Rose Mairead Comaskey is a longer shot at 33/1.