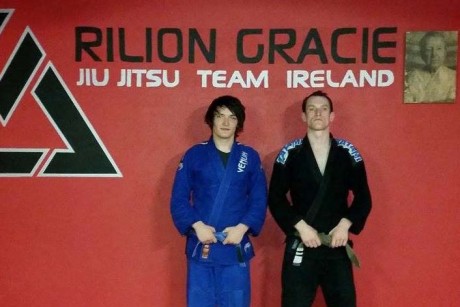 BY RYAN FERRY
LETTERKENNY man Damien McLaughlin will make his MMA debut at the AKUMA Fighting Championships 6 in Templepatrick, Antrim on Sunday.

McLaughlin – who is a member of the Rilion Gracie Ireland in Letterkenny – will take on Gearoid McDonagh at the Templeton Hotel. The 19-year-old has been training under the guidance of Brian Coyle for the past two and a half years and he has made steady progress during that time.

The Bamtamweight fighter regularly trains twice a day and he has been working hard on striking and grappling in recent weeks. He has also cleaned up his diet to lose six kilos for the fight. The Akuma promotion has grown with every championship and they will host their most stacked card to date on Sunday.

There is a lot of interest in MMA currently following the success of Conor McGregor and Joe Duffy, and another young Rilion Gracie fighter Dean Watters won his debut fight at Battle Zone 13 last month.