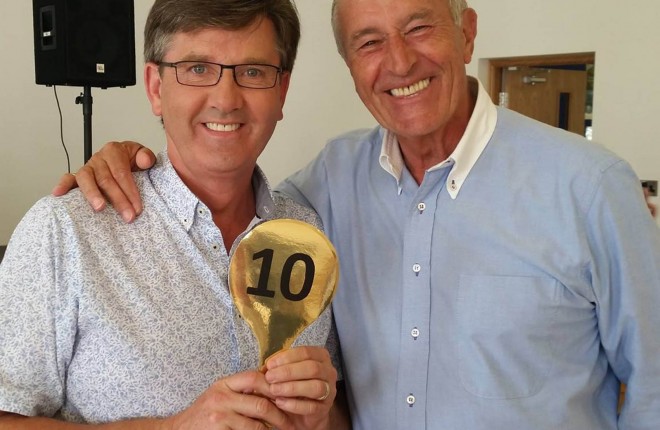 BY SEÁN P. FEENY
IT has just been announced that Donegal’s own Daniel O’Donnell will be participating in the upcoming season of BBC’s Strictly Come Dancing.

The Kincasslagh man, pictured above receiving a ’10 from Len’ while dancing during the recent filming of TV show ‘Holiday of my Lifetime’, is a huge star in the United Kingdom and no doubt his participation in the popular programme will attract a large viewership.

Daniel is, of course, known not to be shy of a ‘wee’ dance during his shows and word has it that while studying Irish at Oideas Gael in Glencolmcille, he did not refuse one single lady a dance during the ceilí in Hala Mór. A true gentleman, who will no doubt do very well on the programme!

Daniel was announced on BBC Radio 2 show Steve Wright in the Afternoon earlier today, and admitted he cannot wait to get started on the BBC programme. “Earlier this year, I decided to take a short break from touring and told myself that I would only consider doing something if it was both different and exciting, well what could be more exciting than Strictly Come Dancing? I love to dance and boy am I looking forward to getting started and being the best that I can be!”

Daniel is no stranger to success after becoming the first artist to have a different album in the British charts every year for 25 consecutive years in 2012. The entertainer has sold more than 15 million albums in his career, since shooting to fame in 1983. Other stars who have signed up for Strictly so far include singer Peter Andre, who was announced via the show’s blog on the BBC website yesterday.

Presented by Tess Daly and Claudia Winkleman, after Bruce Forsyth retired following Strictly 2013, the ballroom dancing reality show has been a Saturday night staple since proving a surprise hit for the BBC in 2004. Celebrities are taught to dance by their pro partners, performing live each week for the viewer vote as they bid to lift the glitter ball.