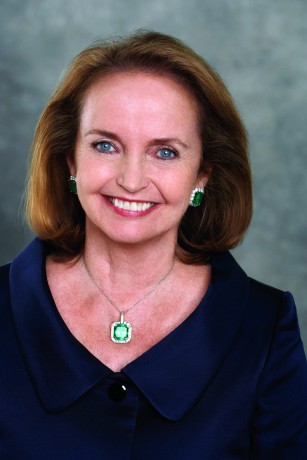 Loretta Brennan Glucksman has been named the recipient of the annual Tip OÕNeill Irish Diaspora Award for 2015.

US philanthropist Loretta Brennan Glucksman has been named the recipient of the annual Tip O’Neill Irish Diaspora Award for 2015.

The announcement was made at a special reception which was held in the Inishowen Gateway Hotel, Buncrana today (Wednesday).

The actual presentation of this year’s award will take place at the Inishowen Gateway Hotel, Buncrana on Friday, September 25. It will be the centre piece in a weekend of events marking the life and times of the late Tip O’Neill, an illustrious grandson of a Donegal emigrant, and an eminent member of the Irish Diaspora

This year’s award winner, Loretta Brennan Glucksman, has been involved in philanthropic endeavours for more than two decades. During that time, she has focused on education, the arts, healthcare and peace initiatives in both the United States and Ireland, a passion she shared with her late husband Lew Glucksman. Her grandfather, David Brennan, hailed from the Inishowen fishing port of Greencastle and her grandmother was Alice Moore from County Leitrim.

Ms Glucksman is the Chairman Emeritus of The American Ireland Fund (AIF), where she served as its Chairman for 18 years before stepping down in December 2013. During that time, the AIF exceeded its goal of raising $100 million under the Promising Ireland Campaign and reset the target to $200 million.

She is Co-Chair of Glucksman Ireland House founded in 1993, the centre for Irish Studies at New York University (NYU), and she serves on the Board of Arts and Sciences at NYU. She also is Chairman of the University of Limerick Foundation. Loretta is also a long-time staunch supporter of FACES (Finding A Cure for Epilepsy and Seizures), which is affiliated with the NYU Langone Medical Center.

Donegal County Council Chief Executive, Seamus Neely said: “This has become on of the most important events in Donegal’s calendar as we honour a member of the broad Diaspora for her work and achievement on behalf of the Irish community in the US and here in Ireland”.