Advertisement
HomeSportGAANeil Gallagher plays it as he sees it: “We don’t worry too much about history”
Advertisement 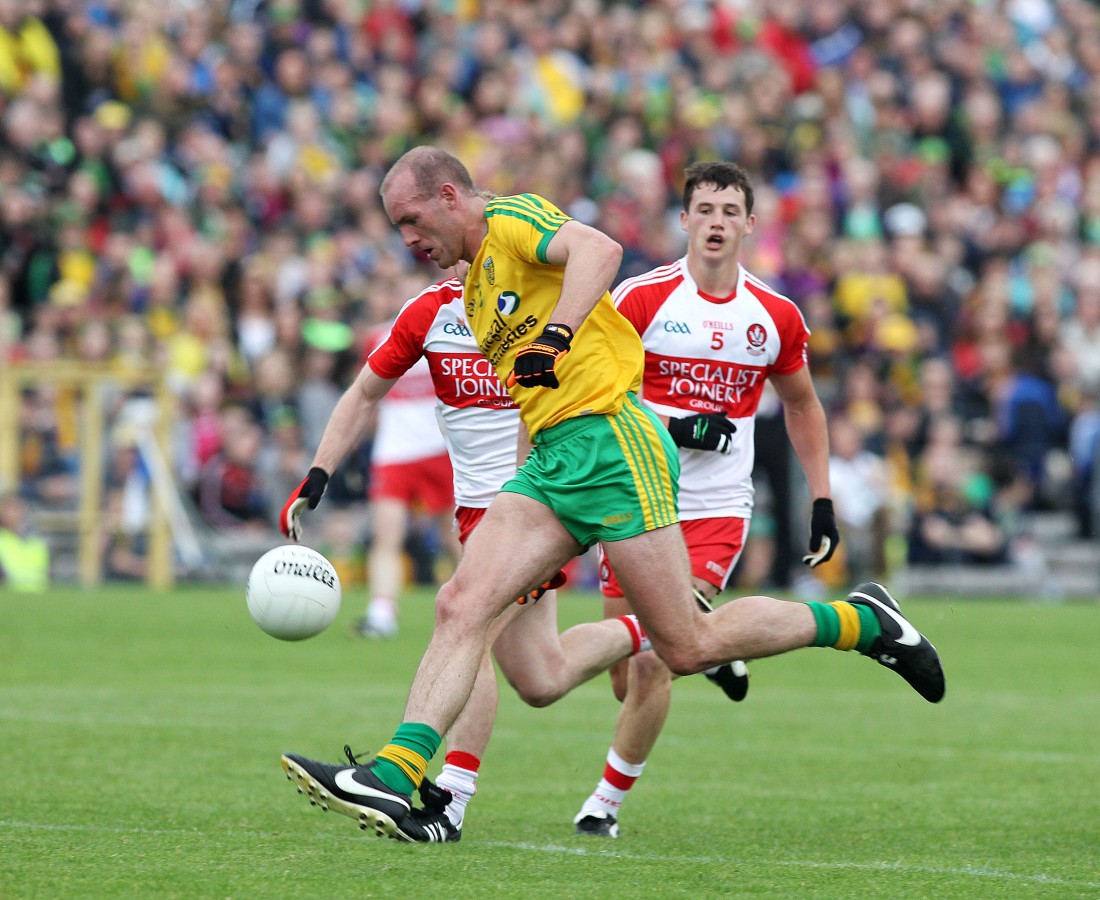 A 17th minute tangle with Niall Holly that resulted in the pair of them getting booked was still gnawing at Neil Gallagher as dusk fell in Clones.

The Glenswilly man shot the breeze in the dugout of St Tiernach’s Park and recounted the moment when he got embroiled in a bout of pulling with Derry midfielder Holly.
Referee Rory Hickey showed them both a yellow.

“It was a bit stupid to get involved in that; it was stupid stuff,” Gallagher said.

At times it feels as if Donegal’s players are having to work hard for frees, none more so that captain Michael Murphy.

During this year’s League, the ‘treatment’ dished out to Murphy was a big talking point, but Gallagher feels his clubman should be getting better protection from officials.

He said: “I’ve seen it with Michael since he started playing with Glenswilly.

“Because he’s so big and strong and he can take tackles, big hits and illegal hits, the referees are probably thinking: ‘He’s well able to take it’.

“In my opinion – and I’m not saying he was subject to that much abuse by Derry – if it’s a free, it’s a free, no matter what size the player is. Just because he’s big and strong, it shouldn’t be a matter of the referee playing on.”

Gallagher had a big part to play in Saturday’s win and it was he who laid on the pass for Martin O’Reilly’s match-winning goal in the 45th minute. It was a score that put them five in front but, strangely, they couldn’t close it out.

Gallagher said: “It was tight; you wouldn’t enjoy that too much.

“We were lucky enough. The goal was the big difference and we’re just glad to get over it.

“Derry were disciplined and organised so it was tight to get shots away because there wasn’t much room.”

Donegal were roaring hot favourites heading for Clones following an impressive demolition of Armagh in the quarter-finals. This was much different, though.

Gallagher said: “You play it as you see it. It was always going to be tough. The players and management aren’t stupid enough to read the stuff that was written after the Armagh game, people thining we were going to win handy. That’s not the way it works. We knew full well that Derry would be well primed.”

Donegal’s prize is an Ulster final meeting with Monaghan, a game that will be the third final in a row between the counties. It’s a spot of history for Donegal, too, given that it represents just the second period in history they’ve reached the final five years in succession.

Gallagher said: “You don’t go out at the start of the year saying about the history and making the fifth final. You just go out to win the next match. We wouldn’t worry too much about history or that.

“It’ll be tight against Monaghan. Malachy O’Rourke will have them well drilled and we’re playing them on their pitch here in Clones. Monaghan have big players around the middle. They’re all experienced players too which is a big help and they’ve got plenty of options.”