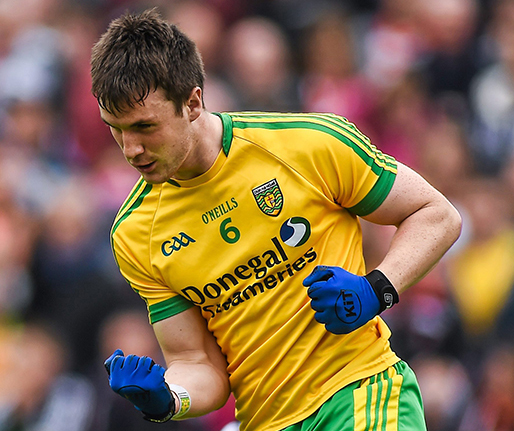 Donegal’s Leo McLoone celebrates after scoring the only goal of the game. Photo: SPORTSFILE

DONEGAL have received a timely boost ahead of the Ulster final with the confirmation that Leo McLoone has rejoined the squad.

The Naomh Conaill player has not featured for Donegal since the 2-9 to 0-12 All-Ireland final loss to Kerry in September but he returned to training with Rory Gallagher’s squad earlier this week.

A number of Donegal players will attend a press-day tomorrow ahead of the Ulster final meeting with Monaghan.

Speaking to the Donegal News, County Board PRO Ed Byrne confirmed that the Glenties man was back on board

“Leo has been training with Rory and the lads this week and he has re-joined the squad,” Byrne said.

North-west neighbours Tyrone and Derry have lost players opting off their respective squads in recent months.

Speaking ahead of this year’s National Football League, Gallagher said that would not pressurise anyone into returning to the squad.

“Leo is a fella who would get into shape very quickly. The likes of Leo have had a long five years at it. The club has been successful too so we have to understand that,” Gallagher said at the time.

With Darach O’Connor and Daniel McLaughlin also expected to return to training this week, Gallagher has a fully fit squad available ahead of the Ulster final on Sunday, July 19.