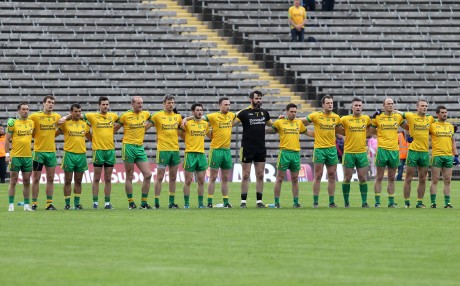 Having reached the summit of Everest in 2013 and after crossing the Arctic Circle last year, the 44-year-old businessman has set to climb K2, the world’s second highest mountain, known as ‘the mountaineers’ mountain’ because of its severe barometric pressure not to mention the fact that one in four perish upon it.

In an interview with this newspaper before his departure, Black was asked just why he’s decided to become the first Irishman to attempt to conquer K2 since Ger McDonnell fell to his death following an avalanche seven years ago.

“There is no why,” Black explained.

“It’s all about progression and wanting to take on the best – about challenging the body and mind.

“You can’t stop half way up the mountain. Self belief is everything. I’ve prepared so hard for this and know what it takes.”

Black described himself as ‘apprehensive but not nervous’.

In Killybegs this week, Rory Gallagher was feeling the similar mixture of emotions as he prepares to lead Donegal into an Ulster final for the first time as the manager. It’s the fifth year in a row that Donegal will line up in the Ulster final and while he was involved for the first three in 2011, 2012 and 2013 as assistant manager to Jim McGuinness, this Sunday represents new ground for the former Fermanagh star.

Donegal’s run to a fifth successive final is impressive even before you consider the daunting route they’ve had to navigate. In reaching the Ulster final, Donegal have had to see off Tyrone, Armagh and Derry. Tyrone and Derry operated in Division 1 this year while Armagh were All-Ireland quarter-finalists last year. Sunday will be Donegal’s fourth game of the summer.

To put Donegal’s journey into some contest, Mayo will take on Sligo in the Connacht final this Sunday and it’s only their second Championship outing of 2015.