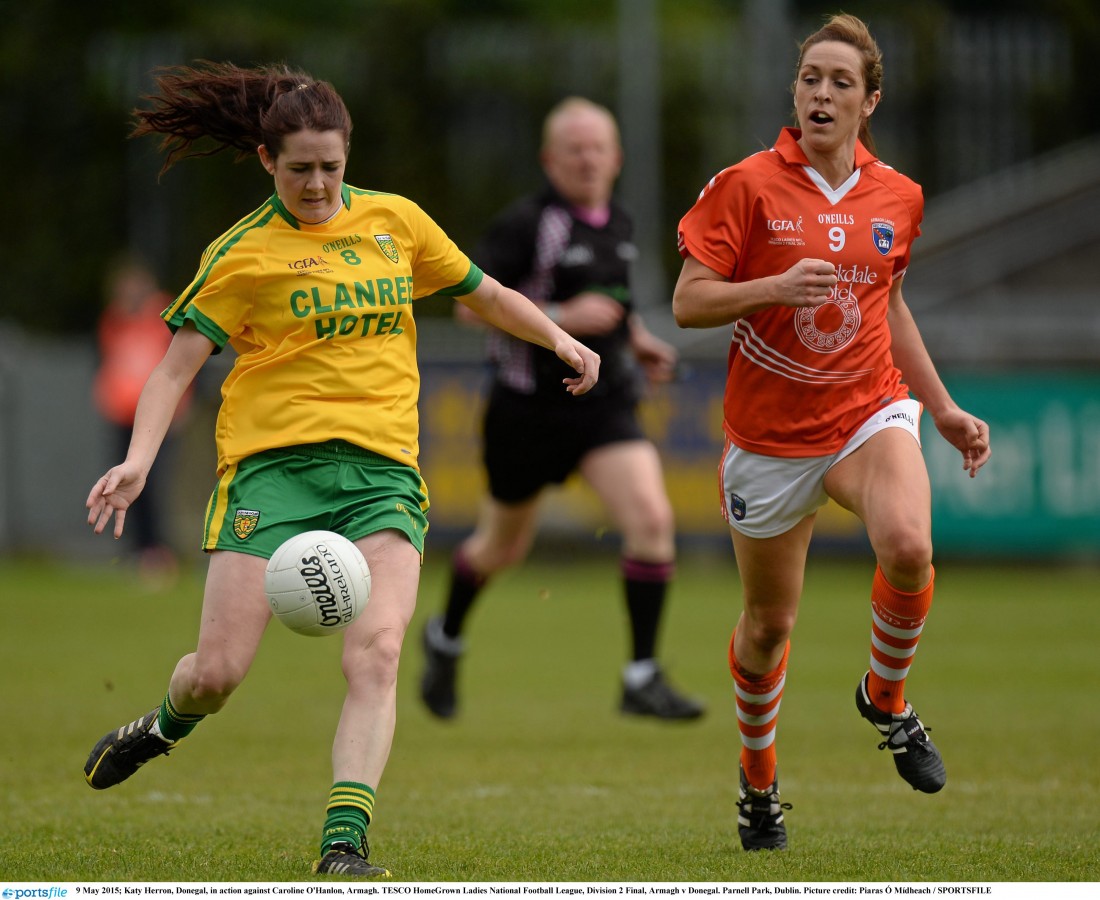 DONEGAL and Monaghan will lock horns in an Ulster Senior final for the second time in a week at St Tiernach’s Park, Clones on Sunday afternoon, throw-in 3.15pm.

The prize this time around though is the TG4 Ulster Ladies title and Donegal captain Katy Herron and her team-mates are eager to go one step better than their male counterparts.

To do that however they’ll have to overcome a Monaghan side who have been the bench-mark for ladies football in Ulster throughout the 21st century.

They banished the ghost of last year’s Ulster final defeat with a comprehensive semi-final victory over Armagh while Donegal were equally impressive is seeing off the challenge of Tyrone.

“The girls have all been working really hard as have the management. Just one more hurdle to go now,” Katy Herron said.

A Maths and PE teacher in Holy Cross, Strabane, Katy (26) is one of the older members of Davy McLaughlin’s squad.

Indeed, of 32 of a panel, only five of them are in employment, the other 27 are students.

“We are a very young team. Our first aim at the start of the year to win promotion back to Division One. We didn’t quite achieve that goal but it’s nice to reach an Ulster final,” she said.

Katy was just sixteen the last time Donegal reached the provincial decider (Donegal were narrowly defeated 1-7 to 0-9 by Tyrone in 2005) and they go into Sunday’s final determined to enjoy the experience.

“Monaghan are the benchmark – they’re the cream of the crop. In the semi final they blew Armagh away and they’re one of the top teams in Ulster. It’s a big ask for us but we’ve worked hard to get here and now it’s all about performing on the day,” she said.

Defeat to Monaghan in Glenfin last year led to Donegal plying their football in Division 2 this time around but Herron believes that that game will count for little on Sunday.

“We had a goal disallowed in that game. I think they might have been missing a few players but then again so were we. The final will be a yard faster than the Tyrone game but I believe that we can give it a right go if we get a good start,” she said.

It took Donegal a while to get going against Tyrone – they led 1-7 to 0-5 at the break. However they were unstoppable in the second half and won 3-19 to 1-7.

Chief tormentors for Donegal that afternoon were Geraldine McLaughlin who contributed 1-5 and Yvonne McMonagle who notched 0-7.

“We’re training tonight (Wednesday) and Friday. Karen (Guthrie) is back running but she hasn’t played in thirteen weeks and, unfortunately, I think the final may come a week or two too early while Deirdre Foley (knee) and Rose Boyle (shoulder) are definitely out,” she said.

Donegal’s target at that start of this year was to play three Championship games. They’re now guaranteed four, at least, with this weekend’s final and then an All-Ireland qualifier or quarter final game.

Should they lose on Sunday they’ll play the winners of Cavan v Down in the qualifiers but they’re a greedy bunch and would like to take the clear route to the All-Ireland quarter-finals that comes with winning on Sunday.

“We’re here now and we’re not about to give it up without a fight. We’ve prepared well and we’re ready. Hopefully we can now get off to a good start,” she said.