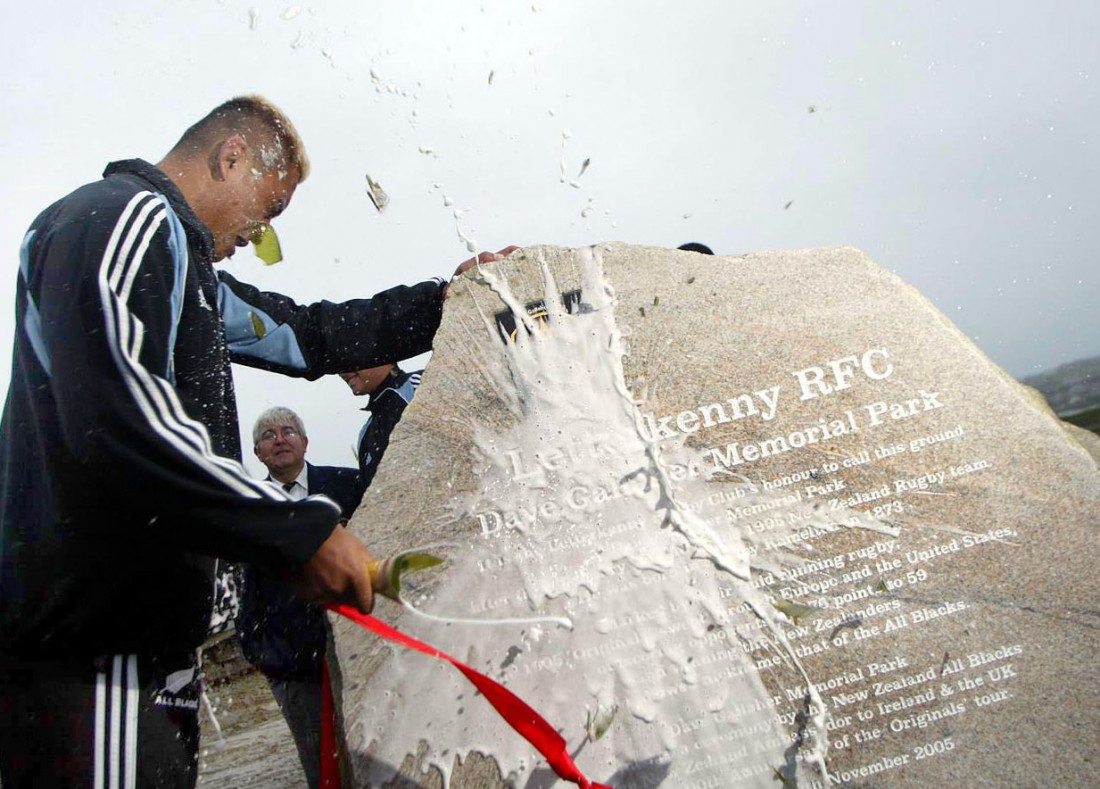 All Blacks star Jerry Collins marks the opening of Letterkenny RFC pitches during an historic visit to the county.

SOMETIMES in this job you really do get the best gigs in town. One Wednesday afternoon in November 2005 was one such occasion – the day the famous All Blacks came to Donegal.

Six of the most famous rugby players in the world mingled, signed autographs and spoke candidly to reporters and locals about their historic trip to Donegal to honour the memory of Dave Gallaher, the 1905 All Black captain.

Led by their captain Tana Umaga, the party included Jerry Collins, Joe Rokocoko, Conrad Smith, Neemia Tialata and Angus Macdonald – all of whom played for the All Blacks against Wales the previous weekend.

The All Blacks attended a ceremony renaming Letterkenny RFC pitch the Dave Gallaher Memorial Park where they were joined by up to 100 journalists from outlets across Ireland and New Zealand.

Jerry Collins gave himself an unscheduled champagne shower – much to the amusement of his team mates – as he smashed a bottle to mark the newly named Dave Gallaher Park.

Understandably, Collins, Umaga and Rokocoko attracted the most attention as they were all seasoned internationals and to this day I remember Collins, in particular, laughing and engaging with the crowd.

Indeed, laughter, smiles, respect and humility were characteristics shown by these sporting superstars throughout their three hours whistle stop tour of Donegal.
It was with great sadness therefore that I learned that Jerry Collins and his wife, Alana Madill, have died in a car crash in France.

Collins’s three-month-old daughter was airlifted to hospital and remains in a critical condition.

The official Twitter channel of the All Blacks posted their condolences, with many from the rugby fraternity also paying tribute.
New Zealand Rugby’s website said Collins’s “ferocious tackling and intimidating presence made him feared by every opponent”.