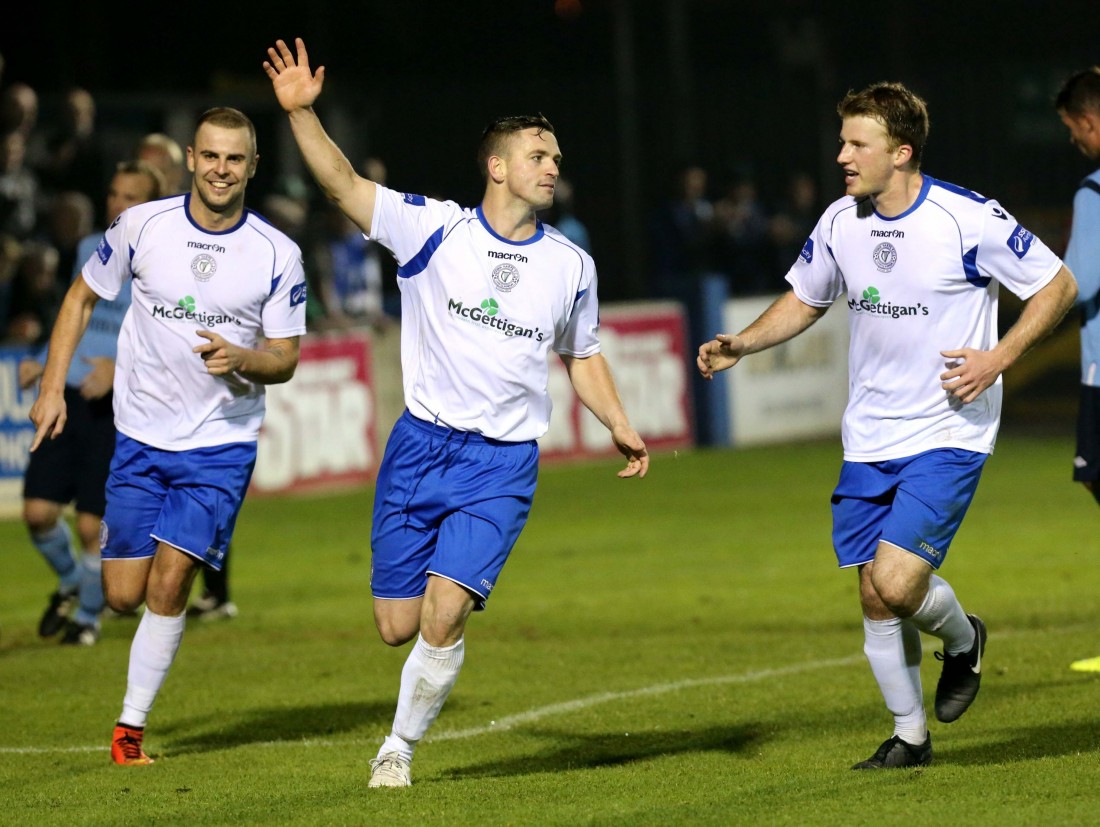 KEVIN McHugh stood in the centre circle at Finn Park on Monday-week last and the memories came flooding back.

They were haunting echoes of a bittersweet night in Ballybofey.

The night of April 23 2002 was raw, passionate and tense around Navenny Street – and that was only at the outset.

Three evenings previously, Fergal Coleman netted the only goal of the game at Strokestown Road as Longford Town defeated Finn Harps in the first leg of a promotion-relegation play-off.

It was all to play for in leg two – one of those nights that Kevin McHugh lives for.

“You get a sense from the media and from around the public before those kind of games about how big the are – there are just certain games where you’ve more fire in the belly and that was one of those nights with a big prize,” McHugh says now.

The prize was promotion into the Premier Division. Finn Park rocked and it was to McHugh’s tune.

First, he took a Shane Sweeney pass on the edge of the box, swivelled and shot low beyond Stephen O’Brien, Longford’s ‘keeper, to equalise after Eric Lavine shot Longford ahead. A cracking finish, off-balance, put Harps 2-1 ahead to force extra time and a magical third followed as he skipped away from his man before driving beyond a helpless O’Brien.

Paul McNally sent the game to penalties and even though McHugh scored his spot-kick, for a fourth goal of the night, he walked out of Finn Park a broken man as O’Brien shot a dagger through Harps hearts, getting down low to turn away Tom Mohan’s sudden death effort.

“Personally, it was a special night, but the whole thing didn’t sink in for ages,” he says. “I didn’t sleep that night. The game was just running through my veins. I couldn’t believe it.”

On Monday week, the now 35-year-old McHugh had a flashback as he stood before the same spot at the Town End. He scored his penalty, but again Longford prevailed, this time in an FAI Cup second round replay.

Around the time of that ill-fated play-off – which had been delayed because of a protest by Dublin City – McHugh was hot property.

He ended the season with 27 goals to his name and prior to the play-off treble he netted hat-tricks against Drogheda United and Dublin City.

It wasn’t too long since he’d been having doubts in his own mind, but against Drogheda on October 9 2001 he began to believe that he was at home in the League of Ireland.

He says: “That night was really about self-satisfaction. Drogheda were just after dropping down from the Premier Division and that was the point where I realised that I could kick on. I got real self belief out of that one. It was a real turning point.

“There were times when you’d wonder: ‘Jesus, am I good enough to be here?’ I came out of the Inishowen League and into the Harps first team squad. You would be there asking about what determines you to be good enough. The main reason I stuck it out for so long was the quality of players I had around me when I was trying to break in. We had serious strikers there like Jonathan Speak, James Mulligan, Davy Dowling and Eamon Sheridan who were all there around that time and you had guys likes big Mike Turner coming in too. That was a good education to get.

“I did spend a couple of years fighting with myself and questioning if I was good enough. I’m sure that’s something most players go through.”

“Once I realised that I was at a level where I could play at that level I got greedy and it was about competing with better players, trying to outscore or outdo them.”

McHugh’s prowess during that 2001/02 season was such that Derby County, Walsall, Wycombe Wanderers and Carlisle United made tentative enquiries.

Aston Villa went a step further and Graham Taylor took a serious look at McHugh, who had two separate week-long trials in Birmingham. During the second of those, he scored twice against Wolverhampton Wanderers at Villa Park in a behind-closed-doors friendly.

“Word came back that they were definitely interested in signing me after the first week,” he says.

“I never felt out of my depth, but at the same time I was going to have to bring something special to the party to get a contract. Looking back now I could have got something with a Championship club, but I had no agent and was making the decisions myself. I don’t have any regrets about it.

“I went back the second week to Villa and played well against Wolves. Graham Taylor said that I wasn’t the type of striker he was after and then he signed Peter Crouch a while later – someone definitely got the stats on me wrong!”

Subsequently, McHugh was asked to travel to Bisham Abbey to join Don Givens’ Republic of Ireland U-21 squad before the FAI learned that he was a couple of weeks overage.

In 1998, McHugh was turning out for Fanad United and he caught the eye playing in the Killybegs Sevens. Across a bar counter overlooking the Atlantic, McHugh agreed to sign for Charlie McGeever’s Finn Harps.

Two minutes into his debut against Fanad in the League Cup at Triagh-A-Locha, McHugh – on for Donal O’Brien as a 68th minute substitute – made his first impact as a Harps player, winning a penalty from which John Gerard McGettigan scored the opening goal. “I wasn’t brave enough to grab the ball off John Gerard,” smiles McHugh now.

Eight minutes from the end, Speak squared across goal and McHugh applied the finish for a 2-0 win. It was the first of the 180 goals he’s netted in Harps colours and the first of 400 games he’s played for the Ballybofey side. Last Friday in Athlone, he became only the second player, after Jonathan Minnock, to reach the 400 mark.

It was fitting that Speak would provide the assist for his debut goal.

“For me, Speakie is the best I’ve played with as a partnership,” he says.

“It was just everything about him. Nothing bothered him. I never saw him flustered. In a one-on-one you could have put your house on him to score. He was such a cool customer and had a bit of everything.”

Having been on loan at Omagh Town during the early noughties, McHugh might well have parted company with Harps during a troubled period, but insists: “I never felt like I wanted to leave even though the club was offloading players at the time – Finn Harps was the only club I wanted to be at.”

Now the club captain, McHugh wears the armband with honour and it’s become about more than results to the Killea man. The club’s image means a lot to a player who took those first baby steps into senior football seventeen years ago.

“I’ve seen a lot in that time,” says McHugh who did have spells at Derry City and Linfield from 2006-2010. “The club has got a lot of bad press and a lot of it has been justified, but what stuck in the throat was people kicking the club when it was down.

“Clubs all over the world go through the bad periods, but Harps now have people on board with brains who are setting structures. It’s not about the current players – it’s about making it easy for the managers and players who are coming in future years.”

McHugh manages the Donegal Schoolboys Under-13s, who won the Inter-League Cup last month, beating Waterford 1-0 in the final and is in the process of completing his coaching badges.

He’d indicated during the winter months that 2015 would be his swan song, but with Harps riding high at the summit of the First Division there may yet be an encore from a player who goes down among the pantheon of legends to have had the Harps number 10 on their back.

“I’m feeling good and my energy levels – which are what my game is based on now – are good. I’d love us to get promoted and to stick around, but the next four months are massive and we’re looking at one game at a time. Ollie and James have that instilled in us and Wexford on Friday will be huge.”

The games, the memories and the goals just roll off the tongue: Those hat-tricks; that never-to-be-forgotten goal in injury time against Derry at Brandywell; his brace against Dundalk on the night Harps were crowned First Division winners in 2004; or the night his stunner helped dump then Premier Division champions Shelbourne out of the FAI Cup.

There could yet be another glorious tale and before the laces are put through the nail, Finn Park will rock again to McHugh’s tune.