Advertisement
HomeSportSports OtherDonegal Rally: The ‘Jewel’ sparkles as bright as ever
Advertisement 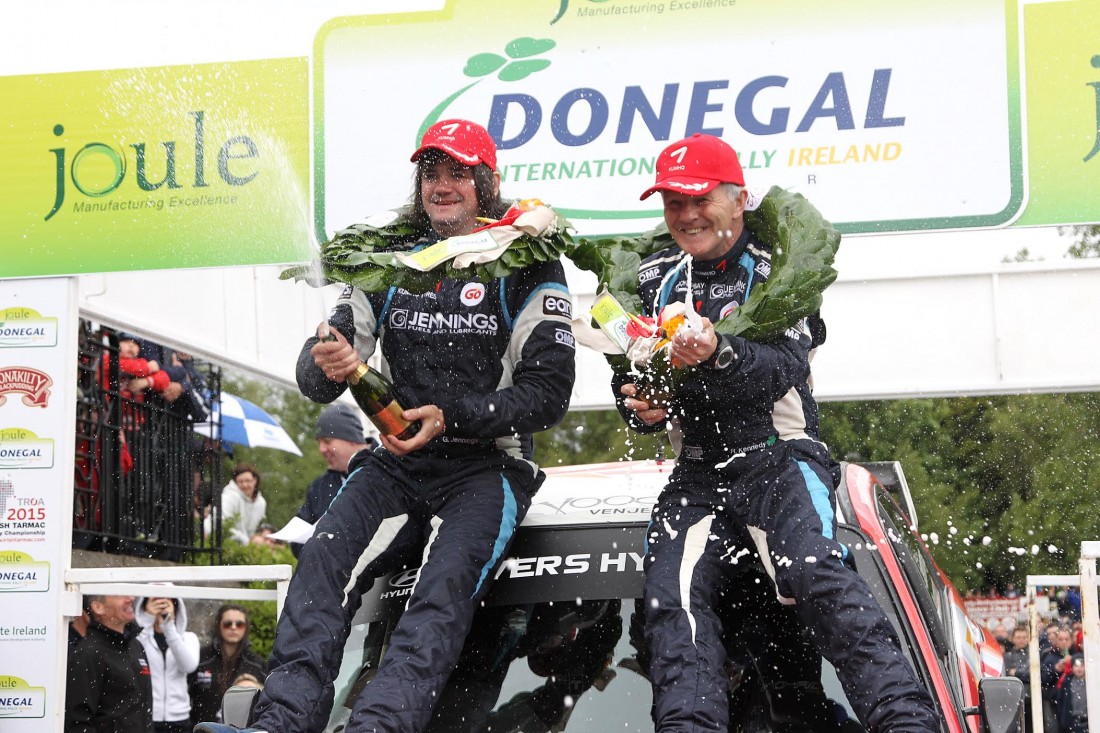 ‘BEHIND the beauty lies a massive challenge’.

The words of Tony Jardine echoed around Donegal on Friday morning as the county awoke to the hum of 151 of the finest motorsport machines the county has seen.

Over three days and in excess of 300 kilometres of Donegal’s most famous stretches of tarmacadam were tackled by competitors in the Joule Donegal International Rally; by the end the verdict was that we’d witnessed one of the best ever in this, the 45th running of the event.

Crowds topped the expected 70,000 mark and at some stages, particularly Knockalla, Carnhill, Gartan and High Glen, attendance figures could have matched the total numbers at some events in the Irish Tarmac Championship.

Some of Donegal’s most spectacular roads were taken in, but there is little opportunity for sight seeing. As Jardine says, the massive challenge takes over from the beauty for a weekend. He should know. The Englishman, the well-known Sky Sports Formula 1 presenter and pundit, was behind the wheel of an Evo 9 for the event, finishing 54th in the national rally with Gordon Noble on the notes.

Rarely has there been such a vibrancy about Donegal Rally weekend in and around Letterkenny.

The local success just added to the feel-good factor by Sunday evening when champagne bottles were in the hands of Donegal men Rory Kennedy, Manus Kelly and Donall Barrett at the Mount Errigal Hotel.

Kennedy navigated for the overall winner, Garry Jennings, in the Subaru WRC, for his fourth success in Donegal, twenty years on from the last of his previous three alongside the late Bertie Fisher in the Subaru Legacy.

This, though, meant more than any other as it meant he got his hands on the Jim Kennedy Memorial Cup, the prize for the overall winner which is named after his late father, the man who introduced him to a sport that would become his life.

“My father was instrumental with the Donegal Rally for years,” says Kennedy.

“He was very involved with the Shell sponsorship and with the structure of the rally. To win his trophy is very honourable.

“It’s hard to believe that it’s 20 years since I won this event last – hopefully it isn’t 20 more!

“This is definitely one of the most special for me.”

Kennedy’s achievements mean he is surely deserving of a place alongside Donegal’s sporting greats.

“Rallying changes all the time and it was definitely a challenge – but that’s Rory Kennedy,” says James Cullen, a two-time winner of the rally in the past.

“He knows what it takes to get around it and you couldn’t have a better man to take you around Donegal than Rory.”

The pair sat down three weeks ago and planned their strategy.

“We set good times the whole way through. We attacked the rest of the drivers when they least expected it to get the big gap.”

Pre-rally, Jennings said he’d know after the first stage if he was capable of sticking the pace. The pair hadn’t done much and rustiness was a danger. Over Trentagh early on Friday afternoon, the Subaru was 1.5 seconds quicker than the M-Sport Fiesta of Declan and Brian Boyle and the Jennings-Kennedy combination led by 3.2 seconds at the end of day one.

When day two drew to a close, that lead was out to 48 seconds with Championship leader Donagh Kelly having a nightmare on Saturday morning. The Frosses man overshot the opening stage, Garrygort, after which he said the Focus was ‘all over the place’, but it got worse on the second run of that stage when they dropped a minute of time – and dropped out of contention.

For Jennings and Kennedy, the foot would remain on the floor. ‘On the door handles’ was how Jennings said he’d been on Friday. For Sunday, Kennedy insisted that would remain the case, noting at the end of SS14, Gartan, on Saturday evening: “It’s the only way he drives well and there is no quarter being given in any case.”

Kennedy is experienced in these arts – and he kept Jennings to the floor for the 20 stages.

“Our plan about three weeks ago was to go for it,” says the 54-year-old.

“We knew that would be our best chance. Declan had a new car and it was going to take him a while to get used to it. We had it all to do to beat Donagh, but the plan worked like clockwork and we never missed a beat. Garry never put a wheel wrong and I’m very glad he asked me to go with him.”

That the Subaru crossed the ramp on Sunday evening in almost the same pristine condition as it had sped away from the Port Road two mornings previous said a lot about the quality of their weekend’s work.

“It was a fantastic drive,” Cullen said of their performance.

“Garry is always on the pace and he can always seem to get a big performance when the chips are down.”

While Kelly was disappointed to go out of the running on day two, the feelings for Boyle – last year’s winner – were of the more positive variety. Having just collected the left-hand drive Fiesta early last week it took some time for the Lettermacaward cousins to find a feel of the car, but when they got into their groove their times significantly improved – and, going forward, the bit remains between the teeth.

“We’re really pleased with the second place,” says Boyle. It took time to get used to it all. We got closer and closer timewise as the weekend goes on so we’re excited about what the car can do. There is good potential in the car. The main thing now is to get it set up for the Galway International.”

Ten weeks ago, Donall Barrett put a call in to Manus Kelly and told him he wasn’t prepared to try Donegal again.

Last year on the Gartan stage the pair were involved in a serious accident. They assessed things and decided to call it a day.

However, Kelly competed in Carlow last month having had confirmation of a change of heart from Barrett. An Escort was hired from Tom Flaherty and they realised a life-long dream when winning the national rally, having 43.9 seconds to spare on Frank Kelly in second.

“We’ve worked at this for ten years and now, for once, it’s all come good,” says Kelly. 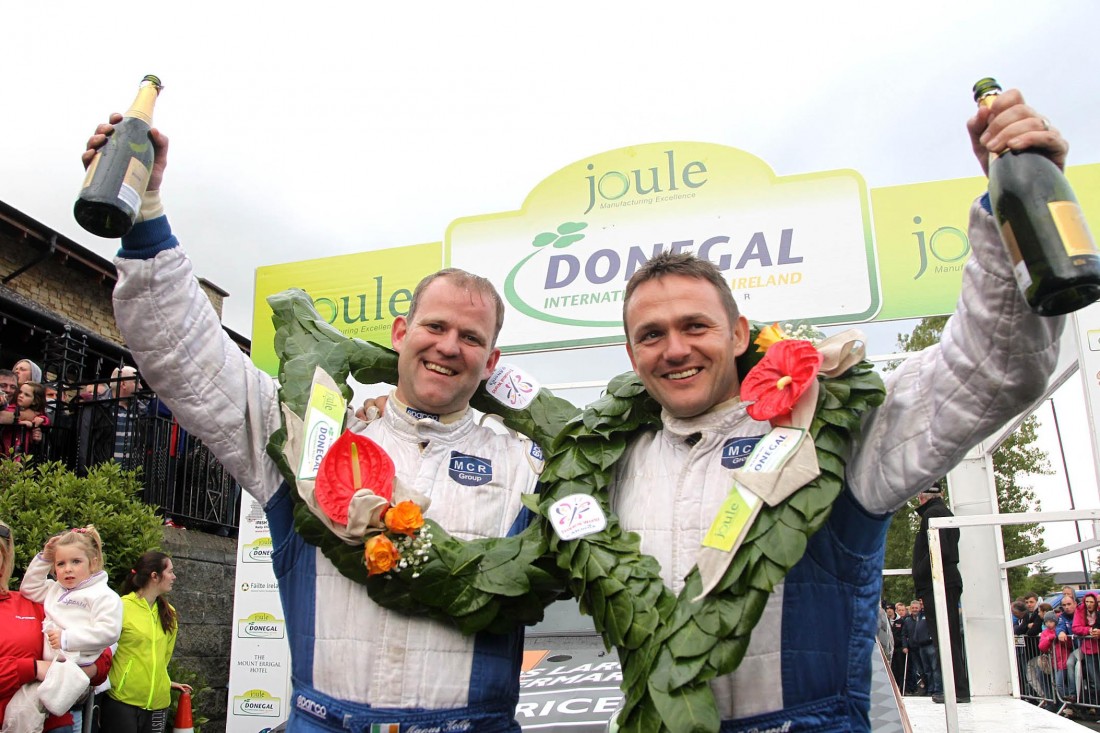 He had a big advantage from Saturday, but the memory flashed back to two summers ago when just one second separated himself and Gary McPhillips heading into the final stage on Fanad. Kelly slid off and the dream was gone.

Only when the Escort meandered towards Portsalon on Sunday evening could the pair finally rejoice this time. Fanad had been, in Kelly’s words, ‘an absolute nightmare’.

“I just had to get around every corner and keep the head,” he says.

“You only realise it when you cross the line We set out this year – and it was a big decision after the big accident last year – to give it one last try. It went very well for us and it was smooth from the start. We felt confident and the luck fell in our way.”

The national rally battle, as always, was one of the weekend’s highlights.

Declan Gallagher was well poised through most of Friday, but the Milkman’s event came to an end on the second loop of Corradooey on Friday as the Starlet ended up in a hedge to scupper his chances of taking the crown, having set some cracking times up to that point.

McPhillips assumed control from there, but when he veered off on Garrygort on the first stage the following morning the weekend belonged to ‘Mandy’.

He had another local crew, Brian Brogan and Damien McGettigan, on his tail overnight on Saturday. Both crews were on song, but Brogan never got going on Sunday after the electronic control unit on their Escort melted.

After Frank Kelly, who was second, came the Ballyare contingent, Paul and Karl Reid, back at the wheel of a rally car for the first time in two years. They soared up the ladder on Saturday, climbing all the way up from tenth and they finished just behind Frank Kelly in the overall national placing in their hired Mk2 Escort.

Despite spending time in a hedge over Carnhill, their home stage, the Reids were fastest on that loop and over Gartan they were similarly impressive. Taking third on the podium represented a weekend beyond their dreams.

“The pressure got on and Frank got us on the last stage, but we had a great weekend. We never gave up. We just kept peddling on. We had a few scares, demolishing chicanes and overshoots, but we had a good run.

“It must have been very entertaining with everyone on the push.”

It certainly was, as Manus Kelly agreed: “People underestimate what motorsport means to this county. It’s the weekend of weekends.”

Donegal has never been any different.

Phil Coulter was a regular competitor back in the day. He first took to the Donegal roads in the Radio Luxembourg-sponsored Porsche. Coulter spoke about the feeling on those weekends: “The only thing I can compare it to was the year (1967) I won the Eurovision with Sandie Shaw – the excitement, the experience, the thrill. It made me feel: ‘Phil, you’re playing with the big boys’.”

The ‘jewel’ in the crown of Irish rallying continues just keeps on sparkling. 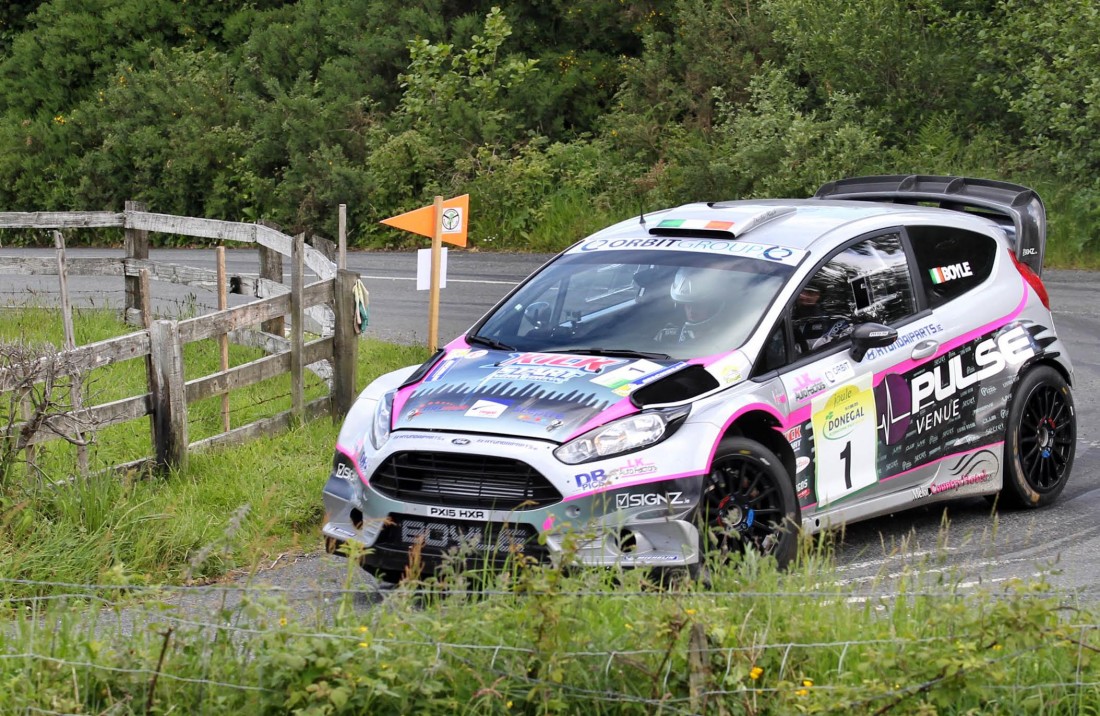