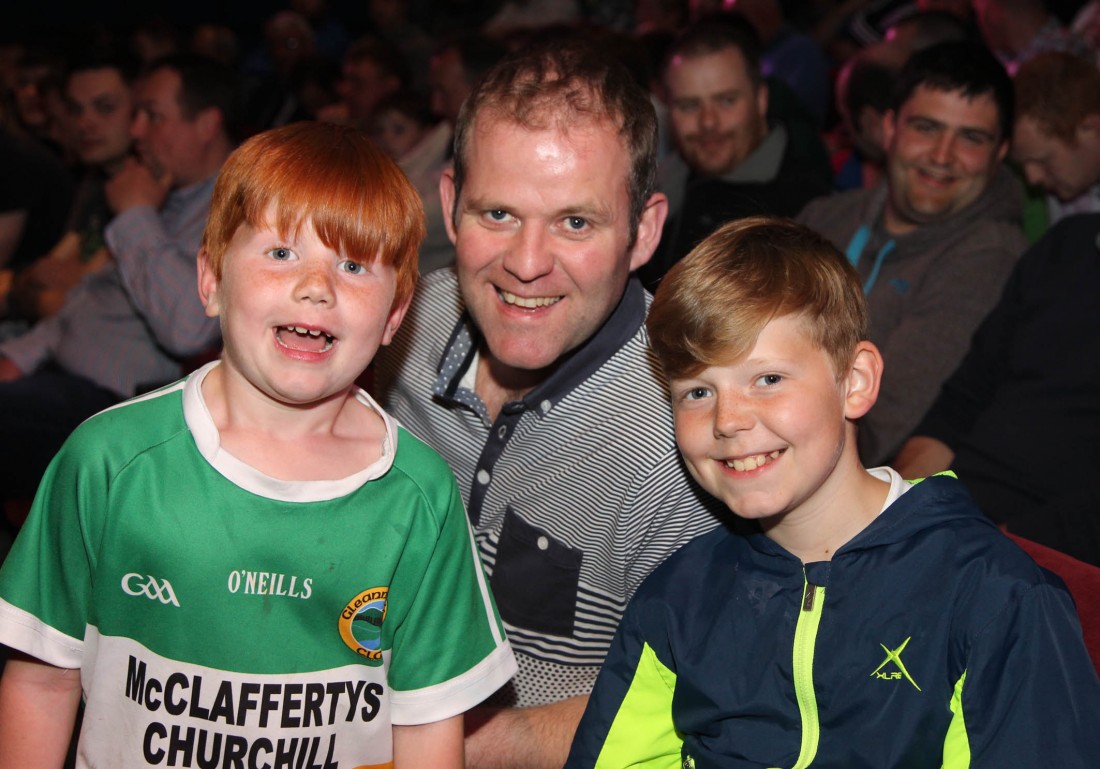 WHEN the tape rolled, the images that flashed immediately brought the minds racing back.

As Charlie Collins, the MC for the night, introduced the official launch of the 2015 Joule Donegal International Rally on Tuesday night at An Grianán Theatre, glory years of previous epic battles began to flood back.

Fisher, McHale, Cullen, Nesbitt, Donnelly, Bonner et al featured in a clip that showed the mystique and magic of the Donegal Rally all in one go.

Another classic is in store this year as messrs Declan Boyle, Donagh Kelly and Garry Jennings head a wedged 151-strong entry list and those three are predicted to be the front-runners when they leave the starting ramp next Friday morning from the Port Road, Letterkenny.

Donegal has always produced a bit of enchantment.

Think of the anticipation that surrounded the entries of Colin McRae in 2006 and Sébastien Loeb a year later.

McRae, driving a Metro 6R4 that was 20 years old at the time, mixed it with the WRC machinery and won the National event. ‘Fantastic fun,’ was how he described his experience.

Nicky Grist rode shotgun with McRae, who passed away in September 2007. He spoke via Skype to Tuesday’s launch and said: “A lot of international drivers hold this event in high regard. Any driver worth his salt would relish Donegal.”

Loeb rolled into town in ’07 and the sight of the famous red Citroën CR4 dicing on Donegal’s tarmac brought an international circus to the county for a month. Loeb won the event, which he used as a prelude for Rally Ireland that year, and mentioned the ‘level of competition’ he’d experienced on a ‘very good exercise’.

It’s not just the modern era that has brought the big names to town.

German Achim Warmbold won the event in 1975 and three years later Ari Vatanen, a Finnish driver who would go on to become world champion, took glory in a Ford Escort RS1800.

From Paris on Tuesday night, Vatanen told how he still holds Donegal in high regard.

“When I think back, it was a bit like going into the deep end of the pool,” he said.

“It was one of the starting points for a big adventure in life. Donegal means a lot to me.”

It means everything and more to some of those who’ll go under starters orders next Friday ahead of three days and 300km of some of the most challenging stages beneath the sky.

The prize on offer for the winner is the Jim Kennedy Memorial Cup. Rory Kennedy is a three-times previous winner of the Donegal Rally and would dearly love to get his hands on the Cup named after his late father this Sunday evening in the Mount Errigal.

“For us local competitors this is THE event,” Kennedy said. He calls the notes for third seed Garry Jennings, the 2012 winner, who again pilots the WRC Subaru, which may have been given a facelift ahead of the event.

Jennings is the third seed, behind Frosses man Donagh Kelly, who happens to lead the Irish Tarmac Rally Championship. Kelly has been cool and consistent so far this year and is the form driver heading into next weekend, again when he’ll have trusted companion Kevin Flanagan alongside him.

This year is predicted to be an ultra-competitive rally with last year’s winners, the Lettermacaward cousins Declan and Brian Boyle, heading the entry list.

The Boyles have acquired a new WRC Fiesta from M-Sport to take the place of the Subaru they rode to glory twelve months ago to become the first all-Donegal crew since Vincent Bonner and Seamus McGettigan in 1983 to take victory.

“We’ve not seen the car yet,” Boyle admitted on Tuesday.

“We’ve had a tough enough year and it’ll be a tall order. It’s a great car though, but we don’t have the power of the 2-litre cars. We’re sort of going into this one completely blind.”

The car will be the first of its kind in Ireland and is said to be one of only four in private hands world-wide. With that in mind, the Boyles will be quietly confident again, although with Kelly motoring superbly this year it is the Frosses man, in the Focus WRC, who is perhaps the favourite at this stage.

The modified section always holds an attraction and this year is no different.

Heading in to next weekend, Ardara’s Declan Gallagher leads the way on the overall leaderboard and with Ryan Moore partnering him in the Starlet the Ardara man goes in with confidence high.

‘The Milkman’ says the year has been ‘going according to plan so far’, but he hasn’t had much to shout about in Donegal.

His plan of attack pretty much sums up just why Donegal will suck in an estimated 70,000 rally enthusiasts next weekend: “You just have to go like the hammers from the start – you can’t lie about!”

World rally ace Craig Breen is taking time out of his commitments to Peugeot to enter in an Escort while Scottish champion David Bogie and motorcycling superstar Michal Dunlop are others who’ll compete on the famous stages of Atlantic Drive, Fanad Head, Glen and Knockalla.

The stardust of Donegal has been sprinkled again.

Then again, as the promotional video showed, that was always the way.

“It was always an event that I admired when I came to watch it,” said three-time winner Eugene Donnelly.

“Motorsport was always in the blood and Donegal was the pinnacle. This was the one I always wanted to win.”

It’s still the one they all crave.