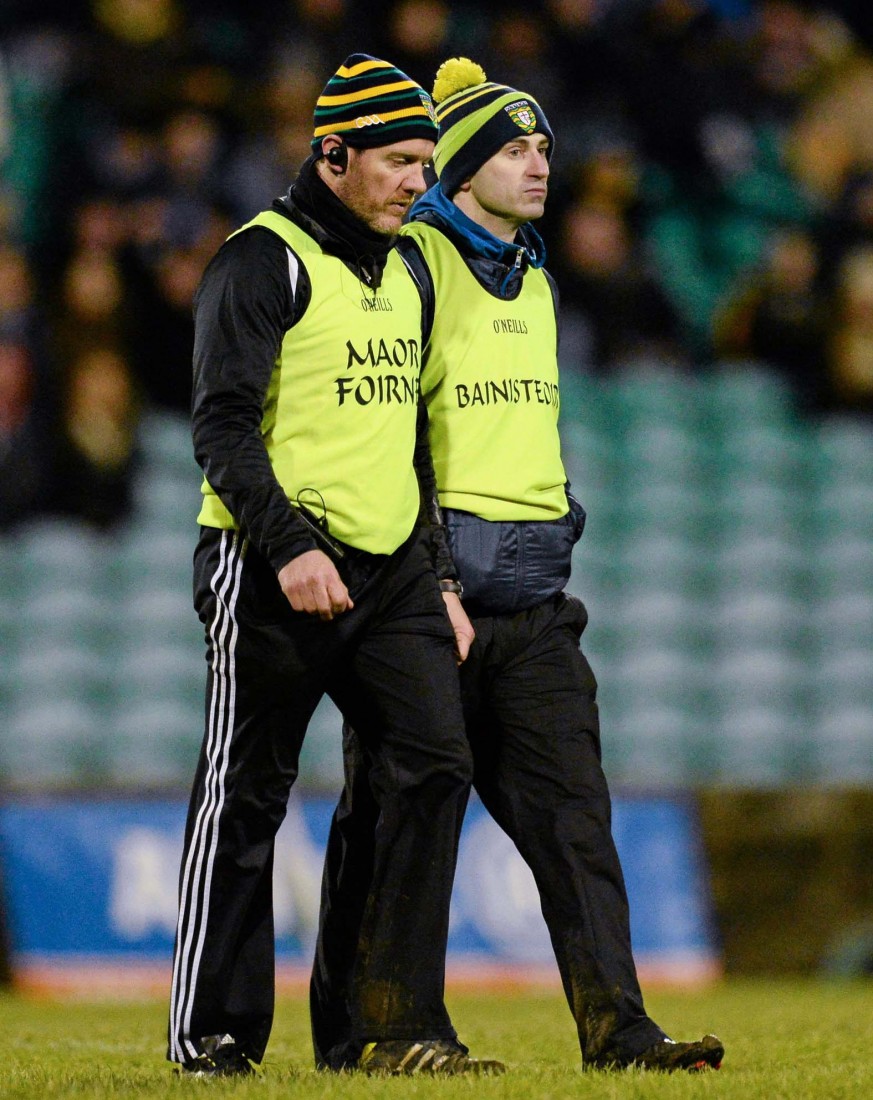 ON Sunday, ‘Team Donegal’ emerged from a training weekend ahead of Sunday’s Ulster quarter-final meeting with Armagh at the Athletic Grounds.

GAA team training and bonding weekends are now the norm and Rory Gallagher, like his predecessor Jim McGuinness, leaves absolutely nothing to chance. Over the past few days, his players have worked tirelessly at honing their game-plan ahead of the battle.

It’s an exciting time to be involved in Donegal GAA and former Westmeath star Jack Cooney is relishing his new role as part of Gallagher’s backroom team.
The new Donegal coach/selector was a highly-respect midfielder with the Lake County in the 1990s. He was a selector with Westmeath during the managerial reigns of Luke Dempsey and Páidí Ó Sé, during what was the county’s most successful period, including the capture of their first Leinster title in 2004.

More recently he managed his native Coralstown/Kinnegad and Kildare side Celbridge, but this latest assignment is different and he has been highly impressed by what he has seen within Team Donegal since coming on board back in January.

Cooney, whose wife Elaine O’Byrne comes from Doonin, Kilcar, is joined in the management team by Gary McDaid, who guided Glenswilly to Donegal SFC titles in 2011 and 2013.

His job with SiteTech Building Products takes him all over the country but he tries to make one mid-week training session with the Donegal squad together with all weekend sessions. He also works with the Dublin based players during the week.

Reflecting back on his first five months in his new role, Cooney admitted the game has moved on immensely from his time as a player.

“Donegal have some very good players; players who are very committed and very well organised. It’s great to be part of it.

“It’s a lot different from when I played and a lot of things have changed. The amount of time put into preparation and the time demands on inter county players seem to be getting bigger and bigger each year,” he said.

Despite that fact that more and more time is now being asked from these players, Cooney would love to be 17 again and starting out on his inter county career.
“There’s so much knowledge and information out there today and there are opportunities are all over the place for any player who wants to step up to the plate.

“It’s so professional. Today players are being trained to suit their age and they’re being properly assessed and monitored. There’s a lot of talk regarding the commitment needed nowadays to being an inter county player, but I would loved to have had this opportunity open to me in my day,” he said.

Cooney got his first taste of the white hot intensity that is the Ulster Championship when he stood on the sidelines during the Tyrone game last month.
“There was a full house in Ballybofey. The build up was excellent, it was an excellent day and the game itself didn’t disappoint. It was great to be part of it,” he enthused.

The next step on his learning curve will be the Athletic Grounds in Armagh.

“Each game takes on a life of its own but I’m sure the atmosphere will be great there too just as it was like in Ballybofey. It’s going to be another full house and I’m sure both teams will be going at it hell for leather.”

There has been much talk in recent weeks about the standard of play in the four provincial championships.

“Ulster football is probably a more level playing field as any one of a number of counties can win it in any given year. Take Leinster for example, Dublin start as red hot favourites at the start of every year and that disparity doesn’t look like changing any time soon.

“But that’s one of the reasons why the Ulster Championship is so exciting. Teams have to be prepared earlier in the year and have to ready to peak in May or June which isn’t the case in othe provinces,” he said.

“I wouldn’t fancy going up against any of them – not even in my heyday! They go about their business very well and have prepared properly and if I can help them in any small way to bring their best out onto the pitch on the big day then I’m doing my job,” he said.

“We make sure that we get what we can get out of a week and then we move on. It really is that simple. We have a double session lined up for the weekend as the game is just around the corner. We need to get work done and we’ll go away and work on that,” he said.

Cooney, who has been coming to Kilcar for more than twenty years, hopes to spend a lot more time in South West Donegal with his wife and three children Ella (12), Brían (11) and Marie (9) over the summer months.

In the meantime, there’s the small matter of Armagh and he’ll be found standing near Rory Gallagher inside the perimter fence on Sunday.

“We’re always within earshot of one another as we analyse the game as best we can and look to see what changes need to be made, if any.

“You need to be ruthless at times as so much happens so early in the modern game. There’s no doubt that the game is evolving year on year technically but it’s a very good time to be involved,” he said.