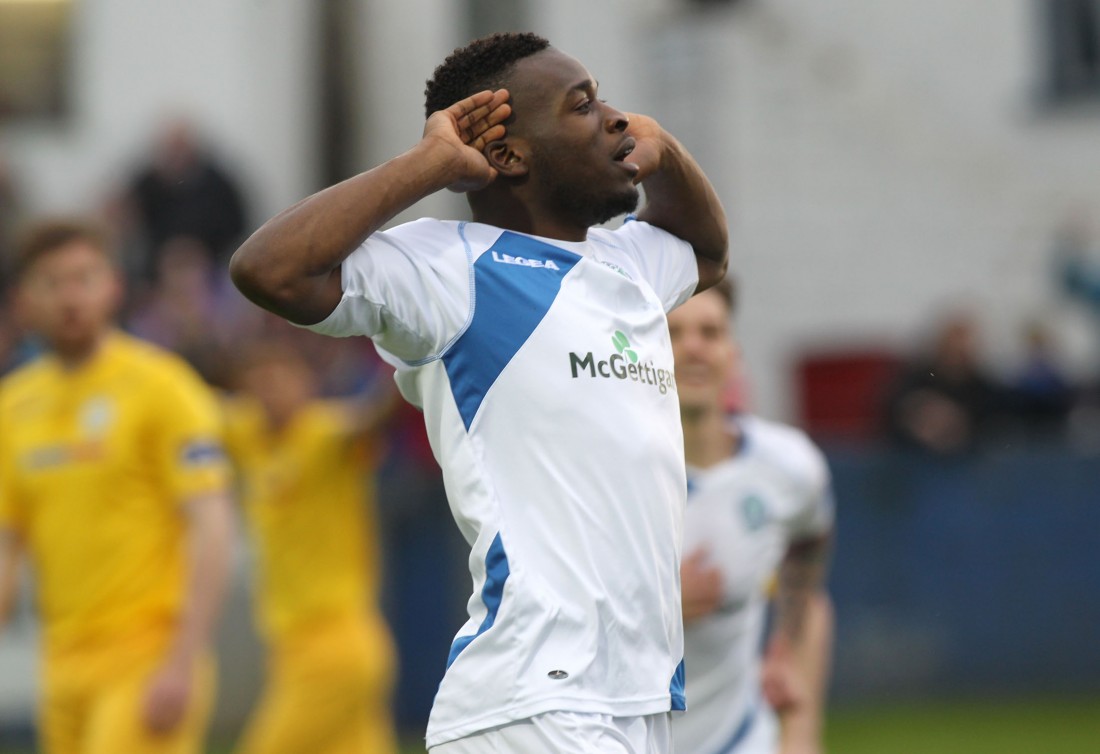 Harps looked to have blown an early two-goal lead as Waterford battled back, but Keating struck the winner in the 87th minute.

The on-loan Sligo Rovers striker shot beyond Michael Connor after being denied by the post with his initial attempt.

It sparked huge celebrations from the Harps player and those on the bench, with the sense of relief inside Finn Park palpable.

It was a night when Harps, who were far from their best, did their best work early and late.

Two quick-fire goals by Michael Funston and Wilfried Tagbo looked set to have put them on their way to victory, but Shaun Corcoran and Glenn Hawe netted to draw Waterford level.

But Keating pounced for a dramatic yet scarcely-deserved winner for Ollie Horgan’s team, who were off-colour for much of the second half.

With Wexford Youths defeating Cobh Ramblers at Ferrycarrig Park, Keating’s goal – his fourth of the season – ensured that Harps took what could prove to be a vital three points.

Last Friday night, Harps were denied victory right at the death when John McKeown secured Cabinteely a draw in the 95th minute.

Funston was restored to the starting XI in place of Kevin McHugh from last week’s team and the Bonagee man wasted no time in repaying his manager.

The midfielder picked up possession 25 yards from goal and let fly with a magnificent effort that sailed over Waterford goalkeeper, Matthew Connor, into the net.

Harps doubled the lead soon after. The stopwatch had just ticked into its sixth minute when Tagbo struck, the Frenchman’s back header beating Connor after he connected with Gareth Harkin’s corner.

Funston was inches away from adding a third in the 18th minute, but he struck the post after racing clear with Ruairi Keating’s follow-up deflected away for a corner.

Waterford got back into it when Corcoran steered home at the back post after Ethan Boyle’s inviting cross was missed by Jack Doherty.

Raymond Foy went close when, following a neat flick by Ruairi Keating from Ciaran Coll’s cross, he side-steped Connor only to shoot into the side netting.

Tagbo looked set to pull the trigger just after the hour mark, Dylan Mernagh intervened with a perfectly-timed challenge just as the striker had drawn his foot back.

Waterford had their moments and there were certainly some nervous times for the home side, not least when Doherty teed up Glenn Hawe, but his shot crept narrowly wide, taking a slight nick off Thomas McMonagle to veer it off course.

There was the sense of the inevitable about what happened next.

The visitors got the goal their endeavours deserved seventeen minutes from the end when Hawe slotted past Gallagher at the near post after being played in by sub Bobby Donoghue.

Keating, after seizing upon a loose ball in the box, saw an attempt spin off a Waterford body as the hosts flung the kitchen sink towards the River End in search of a winner.

However, Keating proved the hero of the night three minutes from the end when he prodded just inside the far post to keep Harps at the summit.