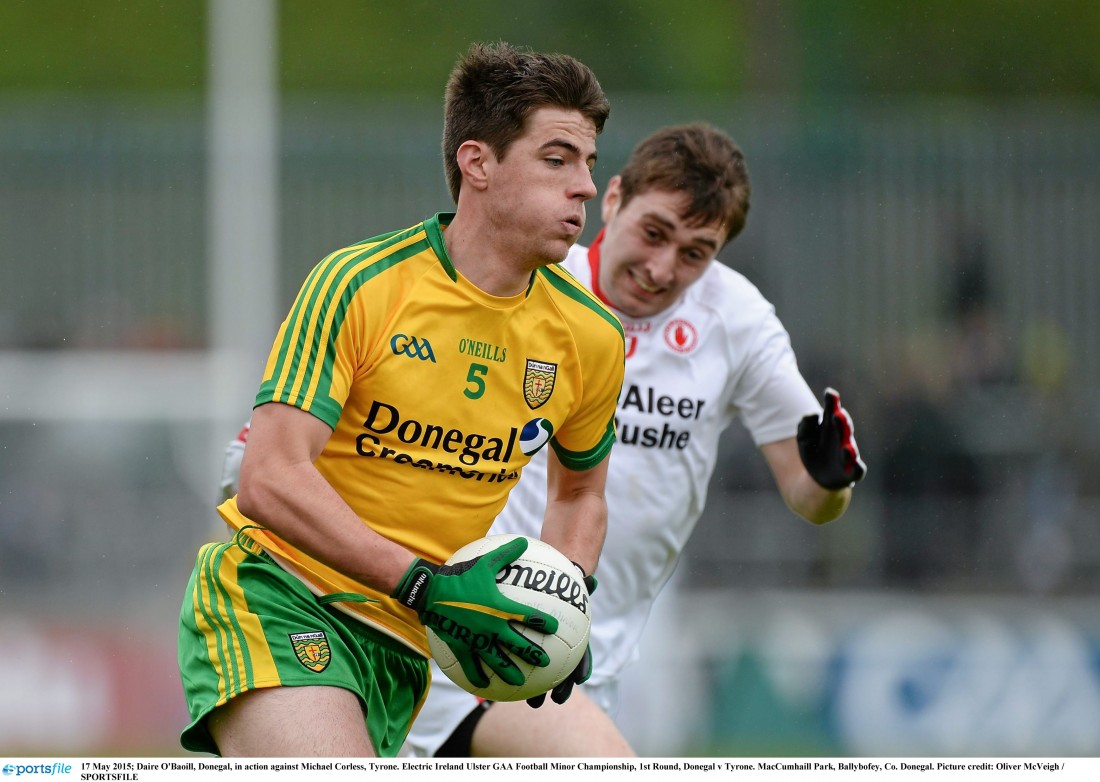 Daire Ó Baoill, in action here against Tyrone, is a doubt for Sunday’s game in Armagh.

O’Donnell suffered concussion and also damaged ribs, forcing him out of action against Tyrone two weeks ago. He is rated as ‘extremely doubtful’ ahead of Sunday’s clash with Aidan O’Rourke’s Orchard, as are the Ó Baoill cousins, with Daire struggling because of a shoulder complaint and Naoise hampered by a groin injury.

Rory Carr has been cleared to play having injured a shoulder at training last week, but of the other three it is thought that Naoise Ó Baoill has the best chance of making it in time.

“We have had a very quick turnaround from playing Tyrone,” Bonner said.

“An extra week would have made a huge difference to us. A lot of these players have an awful lot on their minds as they are starting the Leaving Certificate next Wednesday morning.

“Last year, we really powered on and kicked after the Leaving Cert break. The hope this weekend is that we can get a performance and a result against Armagh which would leave us getting back to where we were last year again.

“At the minute, there is a huge amount going on in their lives and it’s really a balancing act.”

A fortnight ago, Donegal were level with Tyrone at half-time, before they turned in a dominant second half, keeping the Red Hands scoreless after the break and kicking on to win by six points.

Bonner said: “People have said that we were ‘poor’ against Tyrone, but when was the last time we beat Tyrone in the Minor Championship.”

It was in 2006, when the Sean Clerkin-managed and Michael Murphy-inspired Donegal held sway.  When summer rolls around, the end result is Bonner’s sole concern.

He said: “Look, we knew what Tyrone were going to come in with. We knew it would be different to the Minor League game when we had the big win over them in Strabane. They had only six of that team against us in Ballybofey. We expected a tough battle and we got it – but I felt that our boys were very good in the second half of the game.

“We had watched Tyrone at length numerous times. We knew that they were a good side. In the real world, you won’t walk over teams in Championship football.

“We sat too deep in the first half, especially in the middle third and we let Tyrone back into it.

“Tyrone scored in the 24th minute and that was the last score they got. We were happy with the second half. It was a job well done for us without ever playing brilliantly.”

Although waiting on news of the fitness, or otherwise, of O’Donnell and the Ó Baoills, Bonner admits that he would be altering his team in any case. The Donegal boss will not finalise his selection until after training on Friday night in Killygordon.

Cloughaneely man Jason McGee was only drafted into the squad in the weeks leading into the Championship, but the towering midfielder is now very much in contention for a place in Sunday’s line-up.

Bonner said: “Without a doubt, Jason played himself into the frame. Not alone is he big, but he can play a bit and he is an intelligent footballer. We’re delighted to have him on board.

“People could look at it and say that we’ve been a bit ruthless or whatever, but the way we think is that this keeps lads on their toes when you have a man coming in like that and making such a big impact.

“The day someone comes in and is happy to get the gear and sit on the bench is gone. We want men not just fighting for a place in the team, but fighting for a place on the matchday squad. That’s where it’s at and we could see that in training this week, which has been very good. The majority of clubs didn’t use their players last weekend and we have had two really good sessions this week. We’re happy with where our preparations are at and we’re confident heading in to Sunday.

“We didn’t have much intensity in the middle against Tyrone. We were too deep so we’ll be looking to get more urgency in there. We have the players capable of getting scores and around the middle we have been strong all year. We’ve a lot of big men in the team with the likes of Rory Carr, Michael Langan, Mícheál Carroll, Nathan Gavigan and Jason McGee.”

Bonner has predicted a ‘war of attrition’ against Armagh. That it takes place in the Orchard will make it even more difficult for Bonner’s boys to rob the apples.

He said: “We have seen Armagh and they are very strong physically.

“Aidan O’Rourke is the manager and Paul McGrane is also on board with Armagh. They’re All-Ireland winners and are men who know what it takes. Armagh will definitely pose problems for us, but if we can get a performance there is confidence in the squad in our own ability. It’s confidence, not cockiness. We do not underestimate any team – we are ready, mentally and physically.”

Armagh have key men in the form of Jarlath Óg Burns, son of Jarlath, Oisin O’Neill, who is a nephew of Oisin McConville and prolific forward Conor Traynor. Armagh coach Martin O’Rourke said: “I feel that there is a much greater depth of talent within our own ranks than most counties in the country.

“We are capable of doing serious damage to teams and that is our main concern, how to ensure that our boys reach their full potential on Sunday. If we perform anything near to our best we are pretty confident that the result will take care of itself.”

Donegal are the defending Ulster Minor Champions and are third favourites for the All-Ireland, ranked just behind Dublin and Kerry. Tir Chonaill designs, again, are on silverware.

“Clones is the aim – that’s where we want to be in a few weeks,” Bonner said.

“It would be a huge lift for the team and a huge lift for everyone a few days before the Leaving Cert. There will be questions asked, but hopefully we can find the answers on Sunday. You only get out what you put in and these lads have put in an awful lot of work. We know that it won’t be handed to us on a plate, but we’re prepared to work for it.”