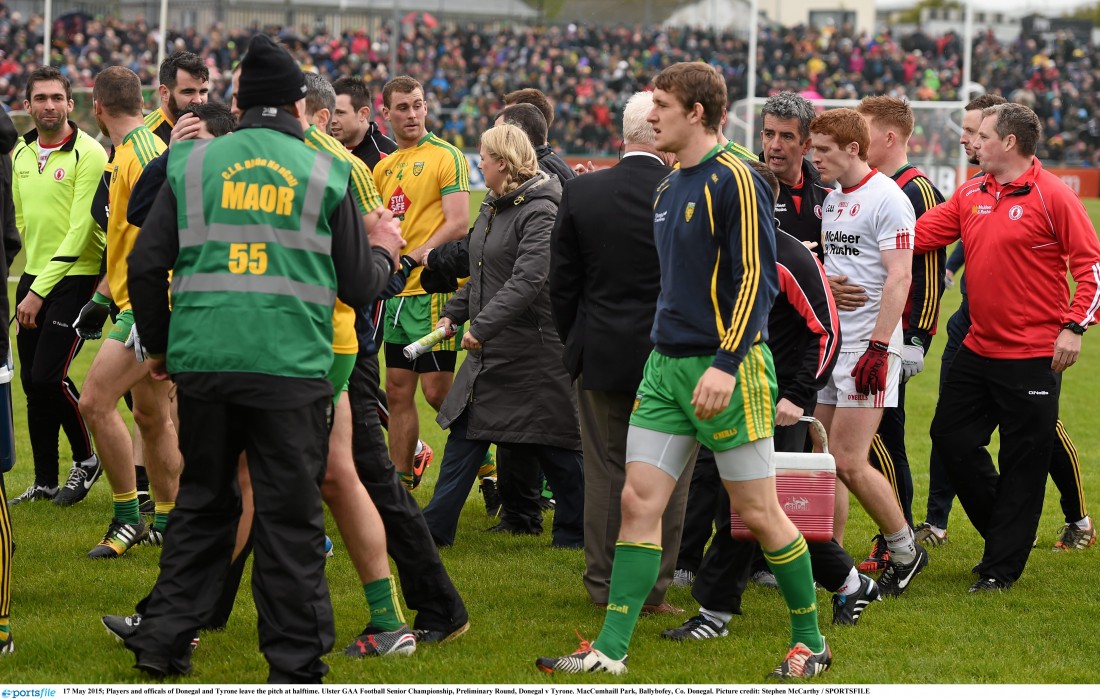 DONEGAL and Tyrone have each been handed €5,000 fines for their part in the half-time brawl that marred Sunday’s Ulster Championship game at Sean MacCumhaill Park.

The Central Competitions Controls Committee (CCCC) delivered notice of the sanctions to the respective counties on Wednesday night.

Tyrone selector Gavin Devlin has been hit with an eight-week suspension for his part in the altercation, which took place as the teams were leaving the field at half-time, just at the mouth of the tunnel.

Devlin could clearly be seen shoving the Donegal captain, Michael Murphy, during the incident which involved players, substitutes, management and mentors from both sides.

The ugly scenes came after a dramatic conclusion to the first half as Martin McElhinney’s goal in added-on time putting Donegal ahead, 1-8 to 1-6, at the interval.

Donegal County Board Chairman Sean Dunnion said that an appeal may be lodged against the fine handed Donegal’s way.

“We will certainly discuss it at Board level,” he said. “We only received the confirmation yesterday so we’ll sit down as an executive and discuss the matter.”

The Donegal News understands that Tyrone were in breach of protocol handed down to the counties beforehand. In this, it was stated that Donegal were to leave the field first with Tyrone to come off second. Since 2012, the Ulster Council adopted the ‘one team after the other’ policy on teams making their exits at half-time.

However, the jostling began when the camps collided and there were unsavoury incidents aplenty that continued down the tunnel.

The Tyrone manager, Mickey Harte, beckoned his men away from the fracas, but attempted to play it down afterwards.

“You know the way the energy was going that end of the half,” Harte said.

“It had been a hectic 35 minutes. It’s easy for us who are observing the game to be well in control of our emotions but the people who are out there in the thick of it, they just might not be in control of it so it took some of us to try and settle them down. I don’t think it was going to develop into anything too rowdy.

“I suppose it is better to quell that from rising anyway.”

Croke Park have taken a dim view, however, and served each County Board with a monetary fine while Devlin has been suspended for eight weeks.

Meanwhile, Donegal’s quarter-final tie against Armagh on June 14 will take place at the Athletic Grounds. There had been fears that the ground’s capacity won’t able to accommodate everyone wishing to attend, but officials quickly moved this week to confirm that the 18,000 capacity ground will stage what is another huge tie between two of the province’s heavyweights.