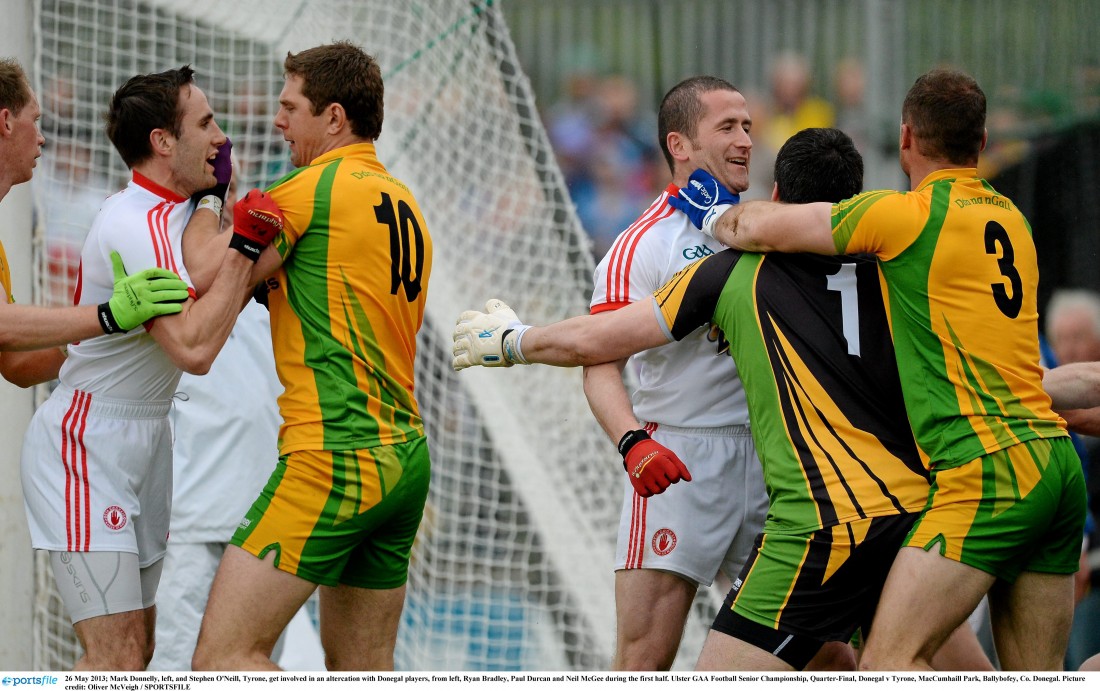 Mark Donnelly, left, and Stephen O’Neill, Tyrone, get involved in an altercation with Donegal players, from left, Ryan Bradley, Paul Durcan and Neil McGee during the 2013 encounter.

BEFORE taking Tyrone on the short trip to Ballybofey in May 2013, Mickey Harte left no ambiguity when he was asked what the game against Donegal meant to his group.

Having been kings of the province with back-to-back Ulster titles in 2009 and 2010, Tyrone found the Anglo-Celt snatched from their pockets in 2011.

Successive defeats at the hands of Donegal, who emerged narrow winners in semi-finals in 2011 and 2012, left a sour taste in Tyrone mouths.

“We see it as a collective effort and, collectively, we owe Donegal a defeat in the Championship,” Harte said before they danced again in 2013.

Tyrone lost again that day. Colm McFadden and Ross Wherity netted in a 2-10 to 0-10 win for Donegal, at the time Ulster and All-Ireland champions.

Although it proved to be a false dawn in terms of where 2013 would end up for Donegal, it was an afternoon that confirmed their dominance over Tyrone.

They meet again in Sean MacCumhaill Park this Sunday when a packed house will witness a collision of two counties whose rivalry, while not among the most storied, has a history of being tasteless.  This means everything in certain parts of both counties.

Ask them around the Finn Valley or on the banks of the Mourne, Finn or Derg rivers about the conflicts.

Time was when the good folk of east Donegal would have to traipse the winding roads through places like Killeter, Aghyaran or Castlederg to be goaded, sneered at – if they were lucky – on the way home from defeats in Irvinestown or Clones. They’d have to endure ignominy of the jeering from the streets or witness the attempted humour in the form of painted messages scrawled on the backs of donkeys, goats or whatever form of livestock was at hand. It stuck in the throat. Tyrone got under the skin like no other.

The feelings run deep between Donegal and Tyrone.  This weekend, the teams are at battle and there’ll be families at war.

That their battles have written some of the defining chapters of recent summer stories has helped keep the flames alive.

“It definitely always meant more against Tyrone,” says Rory Kavanagh who will have the strange feeling this week of being a supporter again having stepped off the inter-county carousel in January.
Kavanagh played in each of Donegal’s last three SFC wins over Tyrone.

From the day and hour the draw was made for the 2011 Championship, Jim McGuinness had Tyrone on his radar.

“There was a reference to Tyrone most nights,” Kavanagh says.

“He knew in his heart of hearts that we’d get over the line against Antrim that first day out. He just knew that we’d take care of that game.

“In my early career, Armagh was always the team we hated meeting because there was just this mental block there when we played them. They just used to wear us down and invariably hammer us.

“When Jim came in there was no word of Armagh. It was all about Tyrone. They’d won Ulster back-to-back. He knew that game was going to happen so he had Tyrone drilled into us.”
Donegal did indeed get over Antrim, but the only fuss that was made thereafter was about how poor the fare had been. Cavan were dispatched and Tyrone came into focus for an Ulster semi-final at Clones. Donegal meant business.

Kevanagh says: “Jesus, there was pressure that day. We knew what it meant. To add to it all, there was that real white heat in Clones. It was hot and humid.

“We had done nothing before that game; we hadn’t made a statement. Tyrone were full of a swagger, sort of: ‘We’ll put manners into these boys’.”

By the 28th minute, Tyrone were leading 0-6 to 0-1 and they’d planted the seeds of doubt. Donegal had won Division 2 of the League, but they’d seen promising springs fall asunder at Tyrone’s hands before.

When Brian McIver guided Donegal to Division 1 glory in 2007 and followed it up with a rare win over Tir Chonaill’s nemesis, Armagh, the optimism rose.

When they met Tyrone in Clones, the bubble burst. Ryan McMenamin stood grinning holding the pin. That afternoon, during a break in play, McMenamin could be heard clearly: “We have them, we have them. They can’t handle it.”

Donegal couldn’t. They were handed their coats and shown the door by Tyrone. When Colm McFadden was sent off having caught Brian Dooher with a cracking right cross, the misery was completed.

With half-an-hour gone in 2011, Kavanagh could see a familiar film playing before his eyes.

He says: “You were starting to think: ‘Here we go again’. Honestly, I thought we were on the road to a mauling at one stage.”

Some of the more sharp memories of the McGuinness era should come from those meetings with Tyrone. In 2011, Anthony Thompson, while deep in opposition territory, conceded possession with a sloppy pass and Tyrone seemed set to punish them to the maximum.

As Stephen O’Neill pulled the trigger, a magnificent block came in to deny him a goal. Having sprinted the lung-testing 80 metres, Thompson was at the rescue.

When Kevin Cassidy arched over a fabulous point, Donegal were just two behind at the break. In the dressing room of a baking St Tiernach’s Park, Cassidy took to the floor. Days earlier he’d called it ‘the biggest game of our lives…a game that will make or break us’. At half-time, the Gaoth Dobhair man urged his men: ‘If this becomes a battle, we know we have the legs for them’.

Kavanagh says: “It was a minor miracle that we were still in the game at half-time – but we were.

“My job was to pick up Sean Cavanagh, but (Kevin) ‘Hub’ Hughes wanted to mark me. There was an awful lot of pulling and dragging. I spent the first fifteen minutes just running around in circles.

“Jim absolutely lost the plot with me at half time. He was like: ‘What the hell are you doing, Rory?’

“At one stage I had to take a yellow card for a foul on Cavanagh because he’d have been in on goal. We were all over the shop, but Cassidy kicked a huge point and we were actually where we wanted to be at half-time: Right in the game.”

McFadden – who famously kicked 1-7 in 2004 when Donegal lowered Tyrone’s colours at a time when they were Ulster and All-Ireland champions – scored a goal in the 55th minute to put his side ahead for the first time.
Leo McLoone, on as a sub in the second half, was perhaps fortunate to escape the ultimate sanction just moments after his introduction for a high hit on Joe McMahon. The sledging and the personal muck flew in all directions – as it normally did when their paths crossed.

The mercury soared and it remained at boiling point until Donegal finally sealed the win, two minutes into stoppage time.

Michael Murphy’s sheer strength held off two Tyrone challenges and, as he fell, the captain hoisted the ball towards Dermot Molloy, who elected not to pop it over the bar. Instead, he shot low and, while Pascal McConnell, the Tyrone goalkeeper, got a touch, Molloy had sufficient power behind his effort to carry it home. 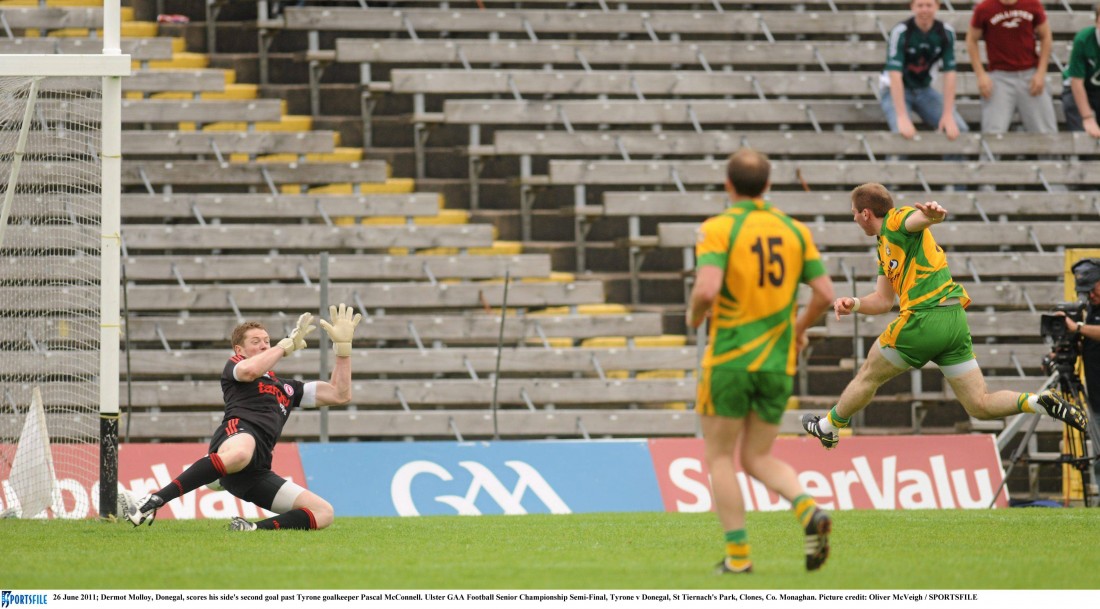 Dermot Molloy, Donegal, scores his side’s second goal in the 2011 semi-final against Tyrone.

“The type of player I am, I’ll always go for the goal in that situation,” Molloy says.

“It was a fantastic feeling; getting the winning goal was very special.”

Kavanagh had a near perfect view: “I was just screaming at him to put it over, but he just wellied it!

“It was a get-out-of-jail score, no doubt.

“When we won, there were no wild celebrations. We knew the seriousness of it. We couldn’t let it slip after that win.”

It was a day that would prove one of the key wins of the McGuinness era. A big scalp was among the pins on his tunic now. A few weeks later, a first Ulster title in 19 years was making its way through the bonfires by the Donegal roadsides.

Molloy says of his golden strike: “The way the year was going, it was a huge goal. The belief probably wasn’t there until that day we beat Tyrone.

“I’d gone back tracking Davy Harte a while beforehand, but when he went another time I took a chance and let him go. We turned it over and I got on the end of the move.

“Tyrone were dominant at that time. Most of them had won three All-Irelands. If we’d lost that day, God knows what would’ve happened after that.”

A year later they were back for another duel. The setting was the same and so, too, was the outcome. Donegal prevailed, but only just. Down to fourteen men – McFadden having been given a second yellow – they were leading by just two points when Tyrone launched one, last attempt at salvation. Martin Penrose appeared to have stolen the win for Tyrone until, from somewhere came Paul Durcan’s left foot to divert the ball onto the upright and wide

“I was right behind Penrose,” says Kavanagh, “and I think it was Papa’s studs, not even his boot that got to the ball.”

Molloy had never experienced anything like the ferocious combat Tyrone played with.

The Glenties man says: “Tyrone always brought something different to the table. They were always hard hitting and you knew that you were in a battle.”

Kavanagh had grown sick of the jibes from McMenamin and company. When he says that the games against Tyrone ‘meant more’ it’s with good reason: “That was built up by years of taking beatings. They beat us and they let us know that they were beating us.

“There’s only so much you can take if you want to have any pride in yourself or in your jersey. There comes a time when you just have to man up – we did a lot of manning up in 2011.”

There has always been something spicy between the counties. Damian Dowds and Donal Campbell wrote in Sam’s For The Hills of a replay defeat to Tyrone in the Ulster final of 1989: “The rivalry that was born in Clones that July was immense and dark, particularly among the supporters. A dislike, perhaps mutual, swept Clones.

“Two tribes went to war and a ceasefire has still to be declared.”

We could be waiting, too.

One of the abiding images from 2013 is of O’Neill’s attempt at shouldering Neil McGee only to merely bounce back off the Gaoth Dobhair colossus.

Kavanagh says: “We have the enforcers now. Men like the two McGees, they’ve taken over that mantle.

“Donegal’s supremacy has been established now. Even though there hasn’t been a lot between the teams, Donegal are on top. “

If McGuinness’s response to Harte pre-game in 2013 is anything to go by, Donegal’s thirst still hasn’t been quenched.

Two years ago, he said: “If you look at recent history, we probably owe them a couple more before it gets level.”

Sunday is more than just a game.  This is, as Ted Turner once reckoned, war without the killing. 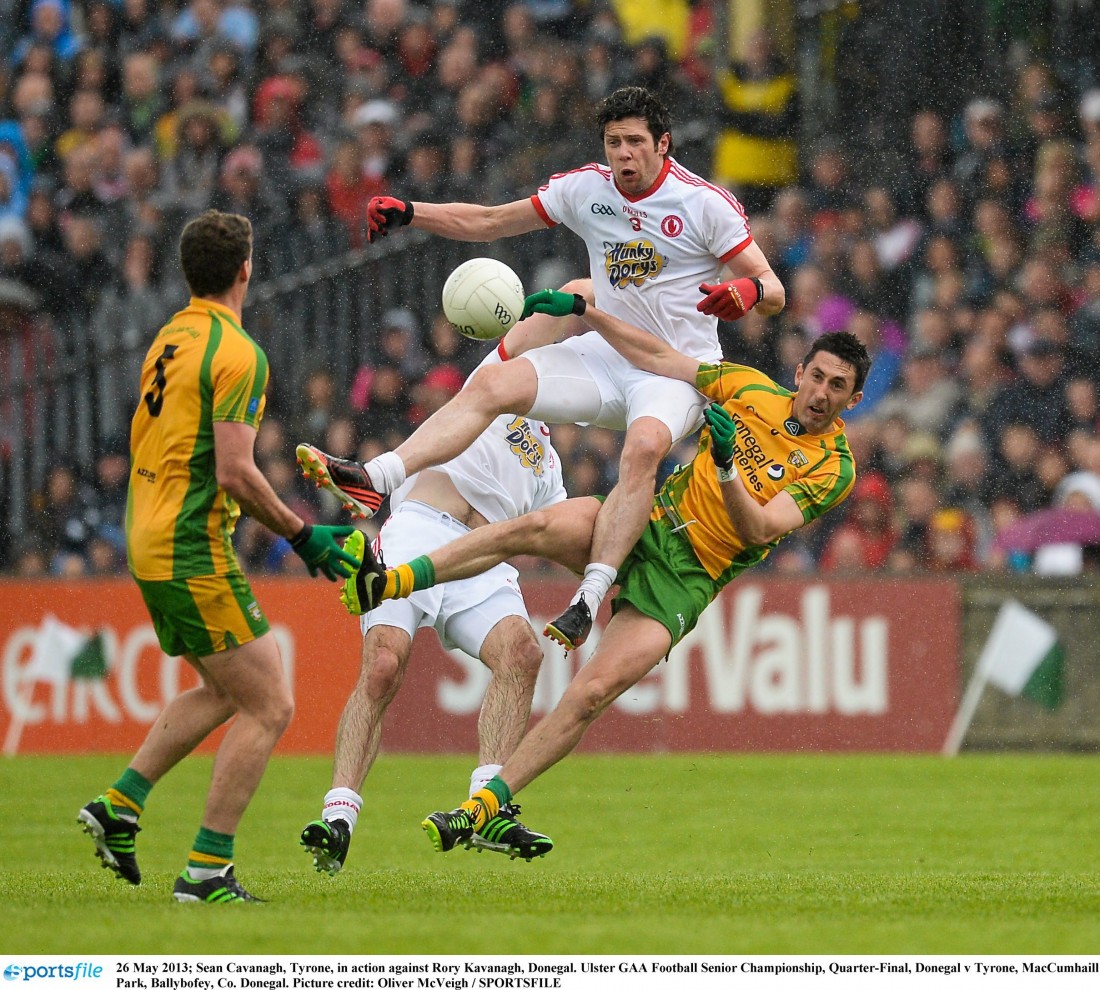