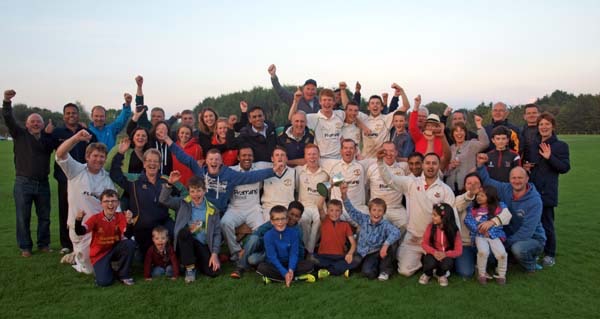 ST JOHNSTON make their return to the North-West Cricket Union’s Premiership this weekend as the Donegal club travel to take on Bready, with hopes high that the Railway Road outfit can establish themselves among the big boys once more.

Captained by Ian Macbeth, St Johnston are back in the top flight for the first time since 2010, when they were relegated after a difficult campaign that saw them win just one of their 18 games.

The Saints made their return last September after a day of high drama at the top of the Championship. St Johnston defeated Bonds Glen by five wickets, but they were left with their ears stuck to Eamonn McLaughlin’s updates on Highland Radio to learn their fate.

Burndennett would have won the Championship by taking a win over Drummond, but they ended up losing by seven wickets in a huge shock. St Johnston were up and the Railyway Road erupted.

Their side is stacked with experience and yet littered with the youthful promise of the likes of Ryan Macbeth, who received an international call up for the Ireland Under-15s in 2013. St Johnston have added wicket keeper Kevin Martin from Strabane. Martin is also renowned as a useful opening batsman while Ryan Patton, another in from Strabane, impressed in the Premiership last year. Both are winners of the top flight and will add significantly to the Saints’ roster.

Although the absence of an overseas player will prove a challenge, St Johnston aren’t short of talent and the return of the economical left hand of Alan Macbeth could be an important weapon in their arsenal.

In David Macbeth, Rammohan Goud and Kushpal Singh, St Johnston have in their ranks men who certainly won’t be fazed by the heights of the Premiership while there is real excitement around the border village at the prospect of seeing Jassi Wallia’s talents against the big guns.

Last year he took 32 wickets and scored a fine 462 runs as St Johnston won promotion. The academy that is now up and running has seen the likes of Ryan Macbeth, Nathan Cole, David Lapsley and Michael Rankin emerge as real players.
How they take to the top flight could hold the key in ensuring that St Johnston can retain their status.