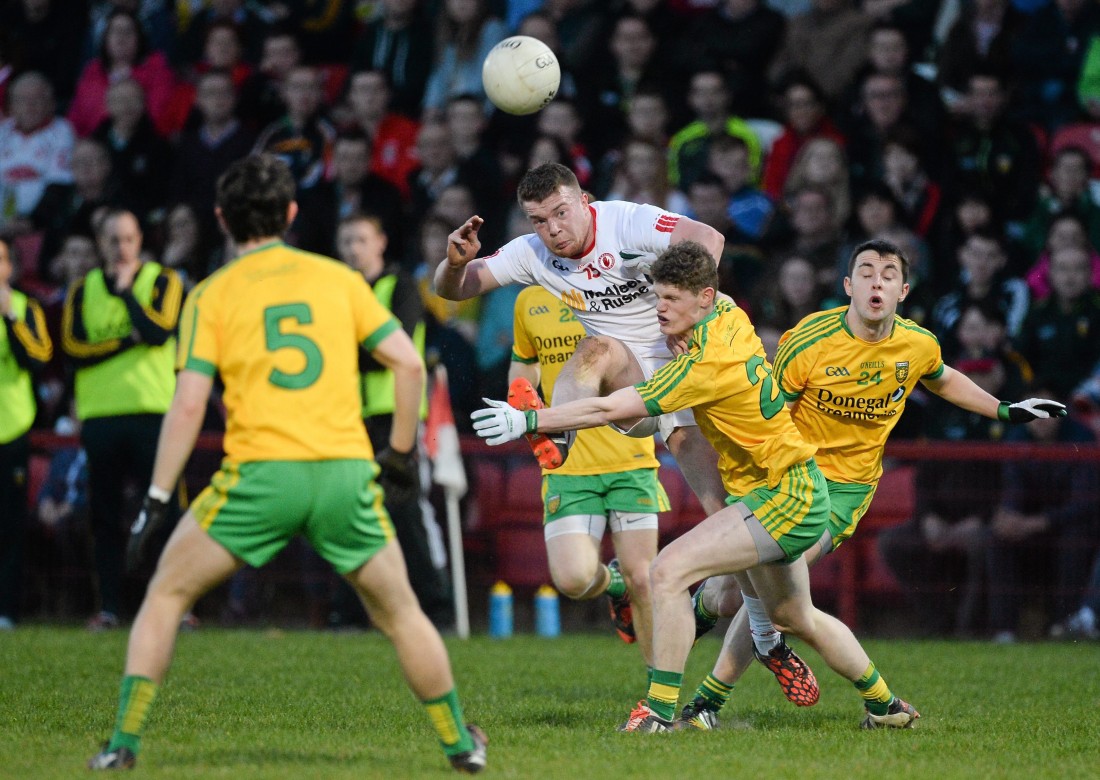 FOR the third year in a row, Donegal’s Under-21s have suffered a painful Ulster final defeat.

Daniel McNulty’s injury-time free takes the title back to Tyrone for the first time since 2006, but Donegal have endured agony once more.

It’s the second year in succession for Donegal to have been bit late in the day, Cavan having pipped them going down the home straight last year.

Tyrone led for the most part, largely thanks to Conor Meyler’s ninth-minute goal, but Donegal stayed in touch and had their chances. When Stephen McBrearty scored an equalising point a minute from time, Donegal looked to have done enough to earn a replay, only for McNulty to pop the champagne after Ciaran Thompson was penalised for a foul on Cathal McShane.

The Red Hands got the game’s big score early on when they broke for a goal just nine minutes in.

Ruairi McGlone fed Meyler with a superb pass and, after scorching his way through, the Omagh man sold a clever dummy before blasting past ‘keeper Danny Rodgers.

Tyrone might have got in for a second goal, but Daniel McNulty – after soaring high to collect a hopeful ball into the mixer – saw a thumping effort bravely blocked by Darragh Mulgrew.

Lee Brennan did point, but Donegal were thankful for the reprieve.

Eoin McHugh clipped over after showing his man a clean pair of heels, but by the break Tyrone were the goal in front as Brennan (2) and Michael Cassidy registered to give them a 1-6 to 0-6 interval advantage, with a McFadden free Donegal’s sole response in the closing moments of part one.

McNulty had given the Red Hands the lead with a 40-metre free, but McFadden (free) levelled it up and Eoin McHugh drilled Donegal ahead only for them to be rocked back on their heels when Meyler hit the net.

Tyrone had the ball in the net a second time when McNulty got the better of Jack O’Brien before his shot, from a tight angle, came off both ‘keeper and post to creep in, but referee Noel Mooney deemed that he’d overcarried.

Willie Gillespie, McFadden and McFadden again brought Donegal to within two but Tyrone had a response each time through Brennan, McNulty and McGlone, who profited from a wayward pass out of defence by Eoghan Ban Gallagher.

McFadden, with his fifth of the evening, reduced the margin, but yet again Tyrone stayed an arm’s length in front as McNulty delightfully squeezed his attempt just inside the far upright nine minutes from the end.

Donegal inched their way back as sub Eamonn McGrath fisted over, a score that was immediately followed by O’Connor arched his second point.

McBrearty drew Donegal back onto an even keel, but McNulty won it for Tyrone.

Yet again, Donegal’s players have to suffer as they watched an opposition captain climb the steps to take receipt of the Irish News Cup.