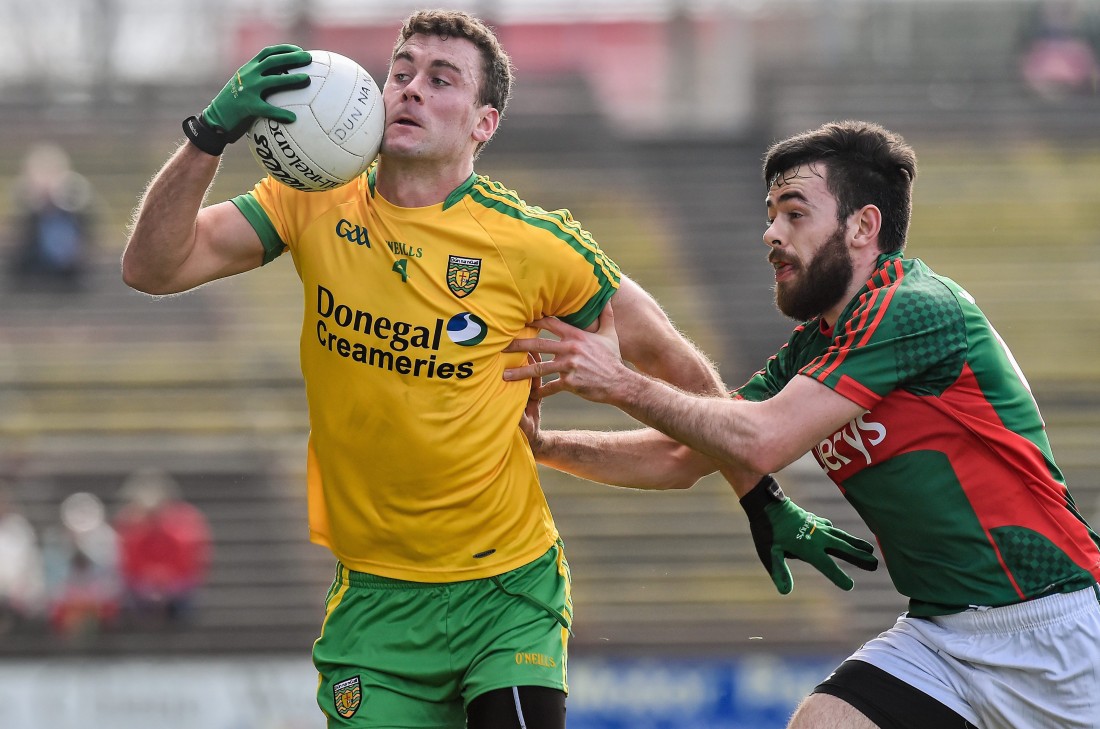 FROM CHRIS MCNULTY IN CASTLEBAR

STEPHEN Griffin’s injury-time point fired Donegal into a National League semi-final against Cork as Donegal snatched a draw from defeat’s jaws against Mayo in Castlebar.

Mayo were holding on by the skin of their teeth having kicked nine second-half wides when Griffin pounced. In his first Donegal appearance in 27 months, Griffin slotted over after a patient build-up.

In a fiercly-contested affair in which the 12,304 attendance saw 10 bookings, three black cards and a sending off, Donegal were ahead at the break thanks to Patrick McBrearty’s 19th minute goal.

Frank McGlynn and Martin O’Reilly played a neat give-and-go before McBrearty riffled to the top corner.

In the absence of Michael Murphy and Neil Gallagher it was McBrearty and Odhrán MacNiallais who carried the can for Donegal, MacNiallais on the mark with three fine first-half points and McBrearty ending with 1-3.

At half-time, with the pulses racing, Mayo were back to within a point as Moran, Donal Vaughan and Aidan O’Shea ate into Donegal’s advantage.

It took Donegal 19 second-half minutes to add to their tally, Colm McFadden breaking their duck.

Michael Conroy and McLoughlin had Mayo two in front, but a quick-fire McBrearty brace had the scales balanced heading into the final ten minutes.

Mayo missed a glut of chances, but Kevin McLoughlin clipped over a free to put them in front. With Donal Vaughan sent off – black carded having already been booked – the nerves whistled around the 12,304 attendance at a boisterous Elvery’s MacHale Park.

Just when it seemed as if Donegal would miss out, Griffin sailed over after the Gaoth Dobhair trio, the brothers McGee and MacNiallais, worked the ball his way.