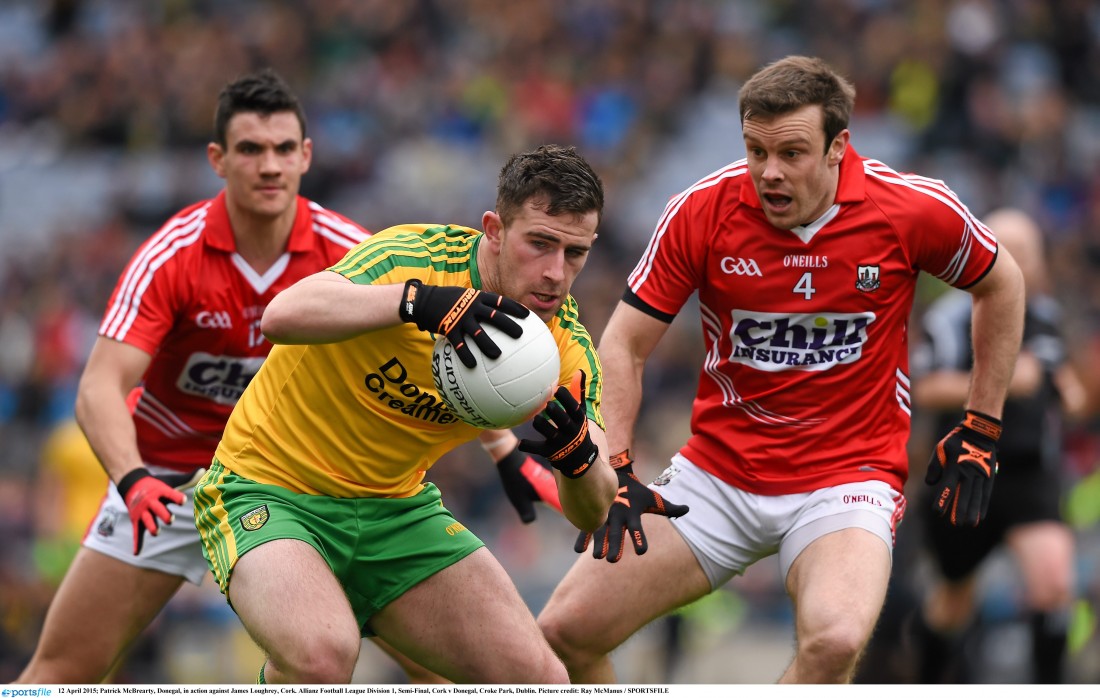 FROM CHRIS MCNULTY AT CROKE PARK

NOW the focus is truly on May 17th.

The date has been inside a red circle on Rory Gallagher’s calendar since the moment a county committee meeting on Halloween night ratified him as the Donegal manager – but now it’s finally the next thing on his agenda.

Donegal lost by four points to Cork in a high-scoring (4-11 to 0-19) Division 1 semi-final at Croke Park yesterday.

Ordinarily, the concession of 4-11 would result in an inquest, but the mood here was in keeping with the general consensus from during the week: They escaped without ailment or suspension on a day from which Tyrone, or in fact any prospective opponent, won’t glean too much about their Championship plans.

Tom Clancy’s goal had Cork level at half-time but a second-brace from Colm O’Neill, either side of a fine finish by Brian Hurley, gave them the passage to a final meeting with Dublin in two weeks’ time.

For Gallagher, there was not a flicker of concern.

“We’re in a different period of training to Cork, but they’re not out in the Championship until June 21st,” the Donegal manager noted.

“There is no doubt that our guys’ legs couldn’t have been fresh coming into today’s game. That had a big toll on them.

“Once we qualified out of the section, we came here to win the game, but we’re pleased with how the League has gone for us overall.”

Gallagher removed the defensive cloak from Donegal’s back – and it was no coincidence that Cork racked up a big score as a result. Eight points from Michael Murphy – on a day when the full-forward line hit 14 between them – was a major plus.

There was a first start of the year for Anthony Thompson, his first since last year’s All-Ireland final, while Eoin McHugh was handed a first League start of his career.

There was no place for the hamstrung Neil Gallagher or Mark McHugh, who picked up a rib injury in a club game for Kilcar last Monday, but the Donegal boss has no big concerns five weeks out from what promises to be a real blockbuster in Ballybofey.

He said “We’re really pleased with where we’re at, with the level of fitness in the squad and with no real serious injuries.

“Neil Gallagher missed out today, but he could have played today no problem. We have a fully-fit squad and we’d expect Neil to be back in collective training on Tuesday night. We’re very fortunate to have everyone available.

“We weren’t gearing to peak for a game today. Unfortunately in Ulster we’re out in a must-win game on May 17th. We have to gear for that one.”

Paul Durcan – whose transfer from Four Masters to Ballyboden St Enda’s was ratified late last week – didn’t feature in the match-day panel, but is also expected to resume training this week.