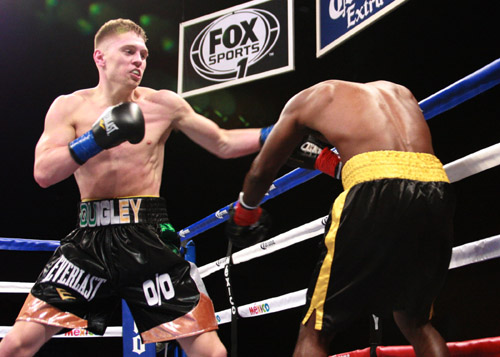 Jason Quigley on his way to victory over Tolutomi Agunbiade.

FROM CHRIS MCNULTY IN LOS ANGELES

AROUND the boxing gyms of Tinseltown, Jason Quigley feels as if he’s been inching closer to realising his dreams, but the Ballybofey man has managed to keep his focus very much on the here and now.

Quigley takes to the ring at the Fantasy Springs Resort and Casino in Indio, California, on Thursday for his sixth fight as a professional boxer.

His fight – against an opponent to be confirmed later today at the press conference and weight in – comes a week on from the one-year anniversary of his signing of a contract with Goldemn Boy Promotions.

Quigley, aiming to take his record to 6-0 after five inside-the-distance wins in his first year as a pro boxer, has often talked about his dream to become a world champion but, for now, his focus is rather more narrowed.

He recalls his ‘mind blowing debut’ at the MGM Grand in Las Vegas in July, when he defeated Howard Reece.

“Everything’s settling down now and it’s starting to become more routine and normal,” he says.

“I am living the dream, but 90 per cent of the time I’m in the gym and the other 10 per cent I’m at home recovering. I’m really looking forward to the future.

Quigley trains in the Rock Gym in Carson and is also aligned to Sheer Sports Management. Top to bottom, Quigley has the best in the business working on his every move.

One dream became reality on April 23, 2014 when the Finn Valley star inked a contract in the Golden Boy offices. Before him stood Oscar De La Hoya, the Golden Boy Promotions founder.

“There are a lot of promoters who have a lot of experience, but none of them have been inside the ring or know what it’s like to be treated as a fighter.

“Oscar has all of that. He wasn’t just a professional fighter – Oscar is a legend in the sport. I’m delighted to be involved with Golden Boy.”

He says: “It’s a beautiful venue. It’s a great place and I’m really looking to gettiung back in there and doing my thing.”

In March, Quigley also fought, and defeated Lanny Dardar, at the Belasco Theatre. Golden Boy are sticking to their word and keeping the undefeated middleweight prospect busy.

Quigley made history as an amateur, winning three European gold medals, including one at the 2013 senior championships, as well as a silver at the 2013 World Championships.

For Quigley, it’s a case of the busier the better.

He says: “I like to keep busy because, as an amateur, that’s what I was used to. I was in the ring every weekend. At the World Championships I had five fights in seven days, so that’s hectic. It’s a bit of a break when I fight two weeks later!

“The fights finished early so everything is looking good so far.”