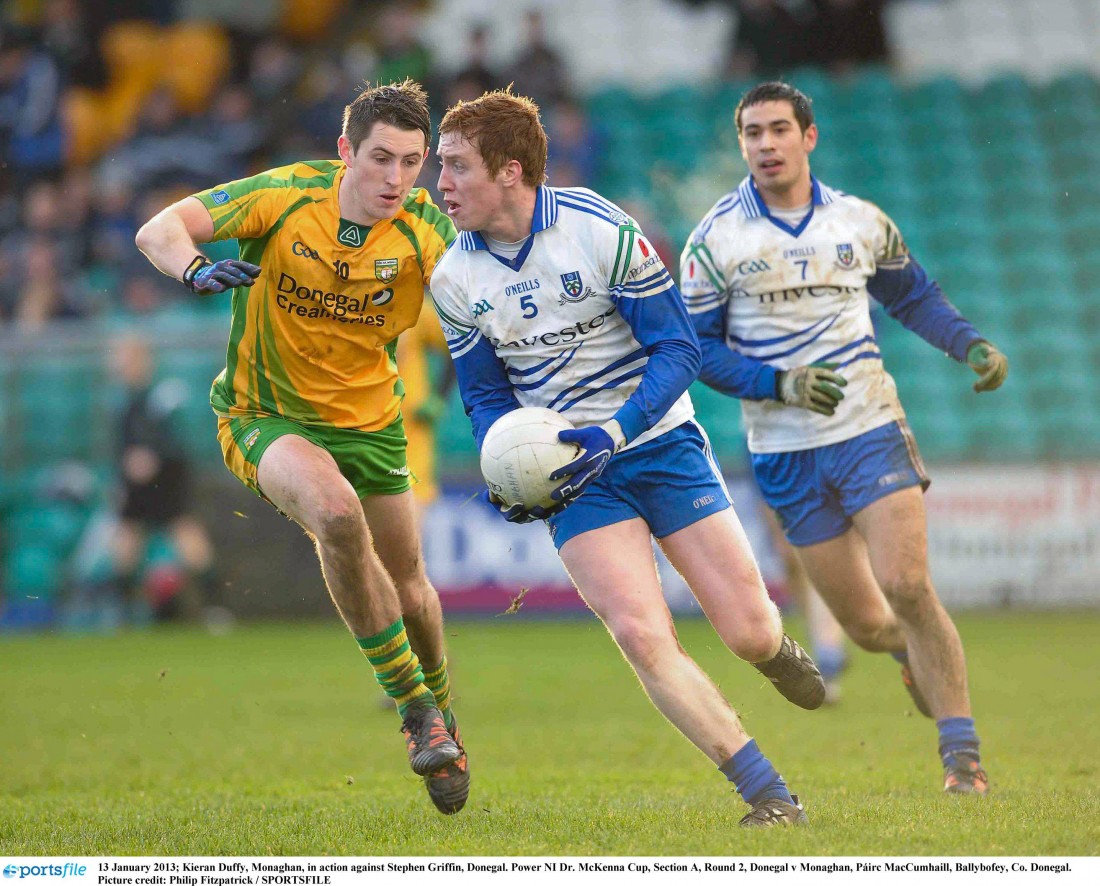 Stephen Griffin challenges Monaghan’s Kieran Duffy in the 2013 Dr McKenna Cup – the St Naul’s man’s last game for Donegal before he returned to make a vital contribution in Castlebar on Sunday.

BY CHRIS MCNULTY IN CASTLEBAR

BEFORE Sunday, Stephen Griffin’s last outing in Donegal colours was in the 2013 McKenna Cup against Monaghan.

That’s 27 months ago and it was an afternoon to forget as experimental Donegal were soundly beaten, 3-16 to 1-5, in Ballybofey. Not long after that, Griffin – a member of the All-Ireland-winning panel in 2012 – stepped off the county panel.

This winter, new manager Rory Gallagher called him back. Initially, he invited the St Naul’s man in for a trial. Griffin had already planned to travel to Australia for 12 weeks with his girlfriend, Donna McCalliog.

Off they went and five weeks ago Griffin rejoined Donegal training having returned from the spell Down Under. With Donegal searching for scores as they trailed Mayo in Castlebar, Rory Gallagher sent for Griffin, who obliged with a late, late score to seal a place in the semi-finals.

“It was nice,” Griffin said.

“ You don’t realise the time when you’re on, bar maybe from the whistling of the crowd. I think we deserved the draw out of it. We put in a lot of work.

“We wanted to come down here and lay a marker, more so than maybe making a semi-final because Mayo are a top team as well.”

His score puts Donegal back on the road to Croke Park for a League semi-final against Cork.

Griffin said: “It’s another big day out in Croke Park. Any day you get to Croke Park is a good day.

“I done a good bit of training when I was out in Australia, but it’s good to be back.”

Donegal might’ve been more comfortable had Patrick McBrearty not had a second Donegal ‘goal’ chalked off in the 43rd minute.

Griffin said: “I thought Patrick’s goal being disallowed was a bit on the harsh side, but that’s just to the to-and-fro of football.”

While he was on the panel in 2011 and 2012, his last appearance at Croke Park was the ill-fated All-Ireland quarter-final in 2009 against Cork, this weekend’s semi-final opponents. He netted one of the Donegal goals, but Cork ran out 14-point winners.

Michael Murphy will be back in tow for the semi, the captain having been suspended for the game in Castlebar.

Griffin said: “Michael is such a massive player for us. It was good for other boys today. They had to stand up. When Michael is on, maybe it’s easier to step back, but when he was out today, other boys had to put the shoulder to the wheel.

“We’ll have Michael back next week so it’s all good.”