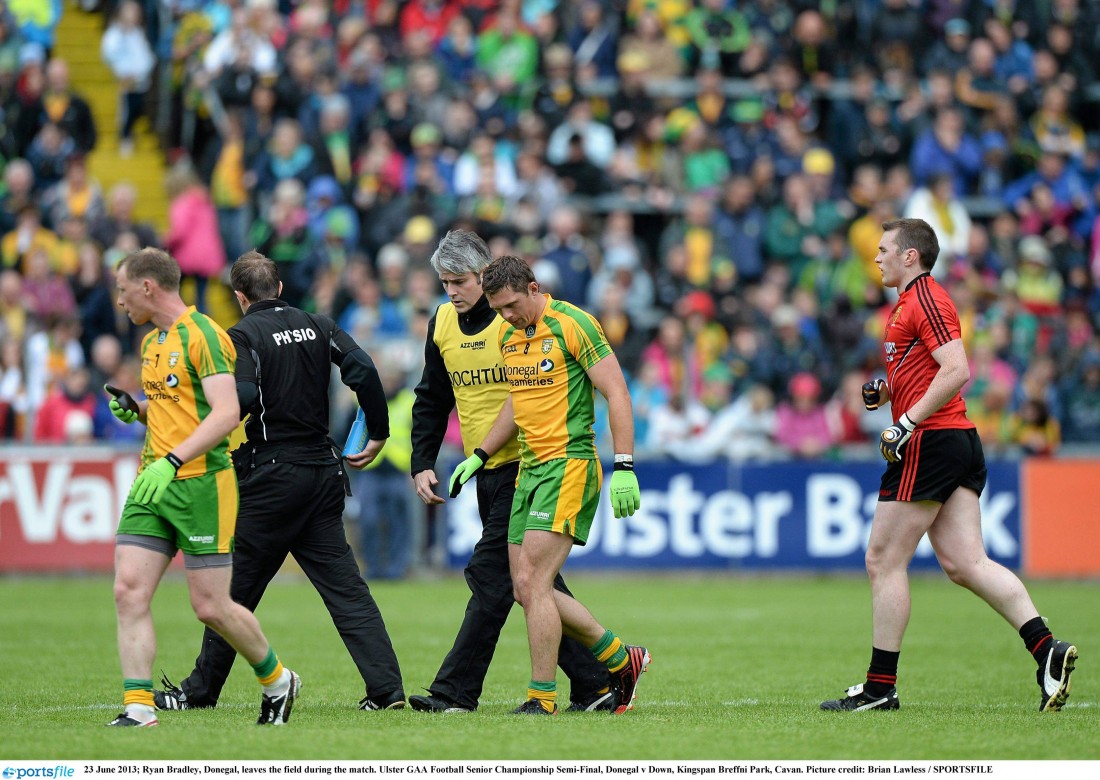 Ryan Bradley, Donegal, leaves the field during the 2013 Ulster semi-final against Down. Dr Charlie McManus is accompanying the player.

THE former doctor with the Donegal senior football team, Dr Charlie McManus, has said that an incident during a game in 2013 that resulted in Ryan Bradley suffering concussion left him ‘petrified and scared’.

Just before half-time in the 2013 Ulster semi-final against Down in Cavan, Bradley went to ground as he won a ball ahead of Down player Keith Quinn. What happened next is ingrained in Dr McManus’s mind.

“Ryan Bradley is 6”2’ and is 15 stone – he is a phenomenal build of a man – and landed straight down on his back after leaping five feet in the air,” he told around 200 delegates at the first-ever Donegal GAA Health and Wellbeing Conference at Jackson’s Hotel in Ballybofey.

“I have rarely been as petrified or as scared in my job as a doctor as I was that day. You see things in this profession that don’t panic you, but I was really nervous when I saw that incident happening.

“When I saw that happening, I immediately tried to call for the Order of Malta ambulance assistance and Ryan was lying prostrate, his two arms outstretched. If there was one thing I’d have done differently that day, I’d wait for the stretcher to have come on.

“Ryan was subsequently hospitalised, he spent two days in his house where he couldn’t open the curtains and he couldn’t work for well over a week.”

In the same game, Frank McGlynn was withdrawn concussed at half-time after mentioning that he couldn’t remember the last 15 minutes of the first half.

Dr McManus said: “This is a married man who had one child at the time and he can’t remember the last 15 minutes. This was life here.

“If you have any doubt, sit them out. The player will never want to come off and people need to be aware of that. You need to act in the best interests of the player – and that usually involves doing what they don’t want, which is taking them out of the game.

“The player might give out to you alright – but at least they’ll be around the next day. Guys on the sideline must be educated. You hear things like ‘mild concussion’ being said when there is no such thing. You’re either concussed or you’re not.”

Also in 2013, Declan Walsh suffered concussion against Tyrone while Mark McHugh sustained what Dr McManus called ‘horrific injuries that equated to getting hit by a car’ during the Ulster final against Monaghan. McHugh spent two nights in hospital with concussion, a burst ear drum and a five-centimetre tear in his quad muscle.

Dr McManus said: “The team management never put a player at risk by second guessing us. That was very important.

“The take home message here has to be: ‘Make sure it isn’t just a bump on the head’. Never, ever, re-enter a player with concussion onto the field of play – that is indefensible.”