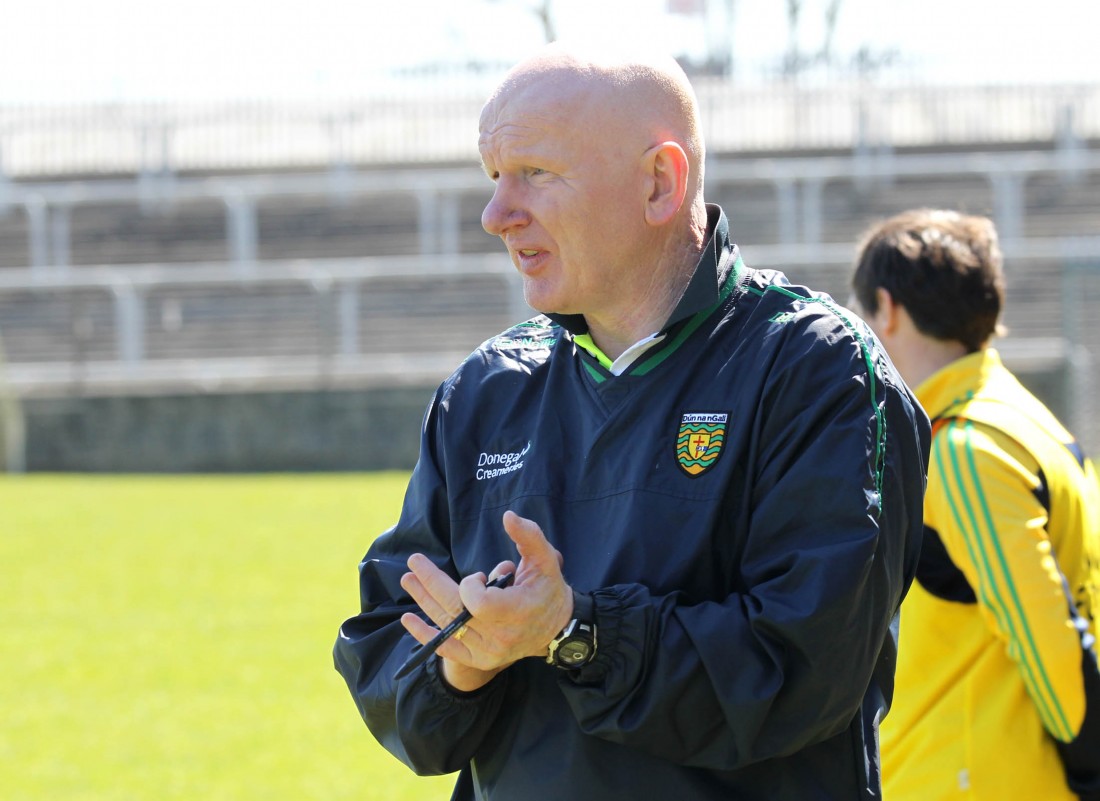 DECLAN Bonner feels as if there’s no substitute for competitive games as he readies the Donegal minors for their Ulster Championship defence.

In just four weeks time, his side tackle Tyrone in Ballybofey and this weekend they have the small matter of a Minor League final against Derry to contend with this Saturday in Omagh (throw-in 12noon).

Bonner welcomes the extra game as he attempts the onerous task of selecting fifteen for battle after a so-far unbeaten League campaign that has seen his side record five wins on the trot.

Down became the latest victims on Saturday when Eoghan McGettigan, Niall O’Donnell and Ethan O’Donnell netted the goals in an eight-point win that didn’t exactly have the manager gushing afterwards.

“It was comfortable enough but it was far from impressive,” Bonner said.

“We had a lot of mistakes there that wouldn’t usually be the way with us, like a lot of kick passes going astray and our scoring rate was very poor.

“Down came with their game plan which we knew would be defensive.

“It was always going to be negative and you have to work your way around these things. We were always confident coming into the game and we started off very well. We let them back into it slightly before half-time. We had a good cushion up to that.

“It was a patchy performance after 20 minutes. We were excellent in those first 20 minutes.”

Donegal had roared into a 2-5 to 0-1 lead before Down crept ever so slightly back into it thanks largely to a Jody McGover goal.

Bonner said: “When we did get that far ahead maybe we did get slightly complacent. We didn’t have the ruthless streak that we’d normally have. I said to them afterward that we needed to be more ruthless.

“From our point of view it wasn’t a good performance. A lot of the ball we gave away wouldn’t have been stuff we’d usually do – we had six or seven kick passes in the second half that went astray.

“Our goals were huge scores. That pace we have in the team is very hard to defend against. We got three excellent goals. They came from attacks right down the middle with pace. We took the chances when they came. Our point taking wasn’t what we’d expect, but that’s something to work on.”

Unlike many of his peers, Bonner is of a school that preaches the importance of competitive games of whatever variety. Under his watch, Donegal have lost just once since the calendar moved onto 2014 after they swept all before them last year until Kerry defeated them in the All-Ireland final.

Bonner said: “I’m delighted that we have another competitive game coming into the Championship.

“There’s a lot of competition for places and we have a lot of boys playing really well. That doesn’t go unnoticed. Eoghan McGettigan came into the side and took his goal well early on. He had a big final on Wednesday night there and scored 2-5. Boys like him are playing with real confidence and the thing is that they know they’ll get the chance.

“We’ve another week now to prepare for another match now. Our preparations are all geared towards May 17 but this is ideal. We’re playing a competitive match against Derry. The more games the better from our point of view.

“There’s a backlog of club fixtures at minor level but they will be played on Monday night – there’s 20-odd lads involved – and we’ll train on Tuesday night and then the finals will be on next weekend. It’s still a tight enough timespan but I’m happy where we are at. The games help us along.”

Bonner has injury worries over Caolan McDaid, Naoise Ó Baoill and Conor Doherty with McDaid now classed as ‘very doubtful’ for the Championship. The Termon man was on crutches on Saturday and a recovery to enable game time on May 17th seems improbable. Ó Baoill has a groin problem while Doherty will have a scan on a troublesome knee this week.

Bonner insists that his door remains open to prospective additions with Naomh Ultan’s Daniel Gallagher joining the squad – and making a second-half appearance – for Saturday’s semi-final.

The manager said: “It’s a good squad and they’re very committed. We took in Daniel Gallagher as he’s been performing. He came from an athletic background and he came in and done some training runs in the last week or 10 days and showed up well.

Bonner has assembled what is almost an entirely new squad this year, but the Na Rossa clubman heaped praise on Stephen McMenamin and Micheál Carroll, ‘the leaders’ as he called them. He said: “They drive things on for us.”