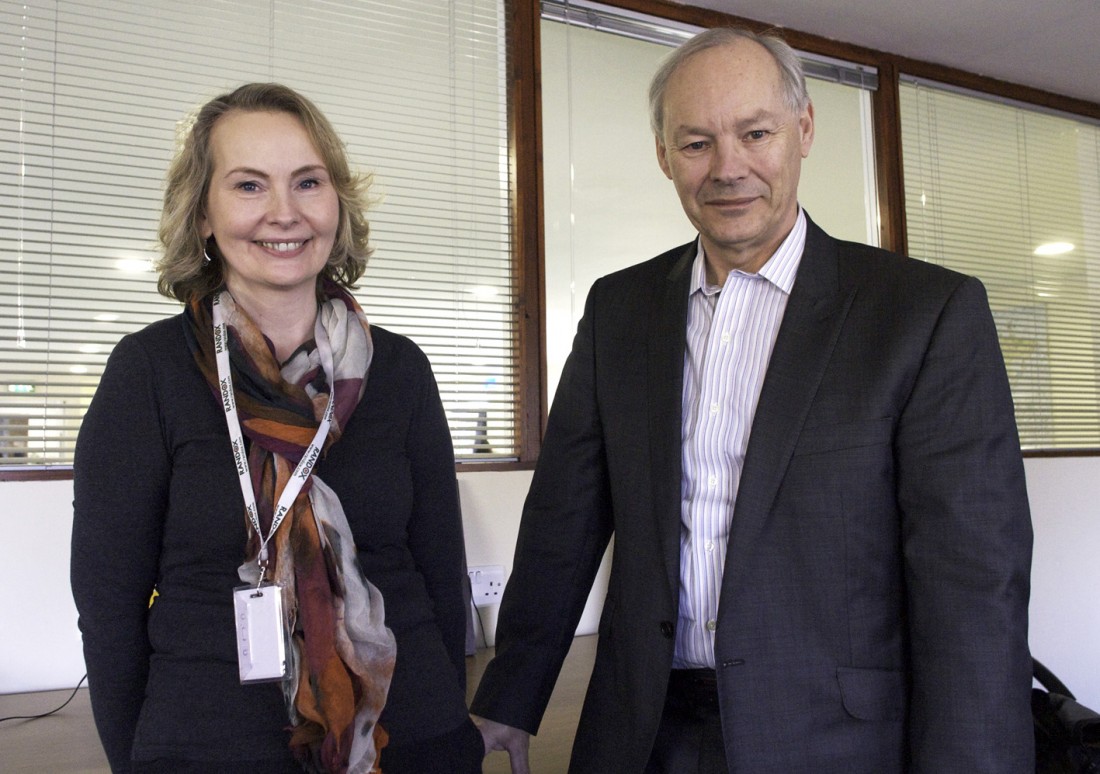 Dr Peter Fitzgerald with his wife Nuailin: “I came looking for export opportunities and found a wife instead.”

BY SEAN HILLEN
Doctor Peter FitzGerald’s goal is clear: to revolutionize medicine. “My aim is to give people more control of their health by strengthening preventive care through better diagnostics that combine scientific advances with new technologies,” the soft-spoken business leader said, seated beside his elegant wife, Nuailin, in the Crumlin-based headquarters of his company, Randox. “By doing so, we can improve and save lives and create savings for health systems worldwide.”
Simple concept, complex challenge.

Yet with 1,300 staff in several countries, including 300 scientists and engineers, Dr FitzGerald has developed ‘biochip array technology,’ which, he said, “allows many in vitro tests to be run simultaneously on the same sample, up to one hundred, thus providing more information to the clinician than ever before and promoting earlier and more accurate diagnoses.”

West Donegal plays a pivotal role. In co-operation with Údarás na Gaeltachta, Randox is to expand its plant in Dungloe from 72 people to 540 within five years with €10 million euro invested and another €25 million to come. That means the town, hard hit by unemployment, emigration and ‘brain-drain,’ could undergo economic transformation with discretionary incomes a boon to ailing restaurants, bars and hotels.

As Dr FitzGerald speaks matter-of-factly about his company’s evolution since its 1982 launch, the immensity of his accomplishments come into focus. Born into an Antrim rural farming background, he attended the University of Strathclyde in Glasgow, then gained a PhD scholarship at the National Institute for Medical Research in London, before winning research fellowships at Queen’s University.

For many, a position at such a respected institution would be enough. Not the ambitious and intellectually curious Dr FitzGerald. In his spare time, he investigated biomedical applications seeking a niche. Speaking to medical personnel, he hit upon diagnostics.
“Doctors only conducted five or six patient tests then,” he recalls. “There was little scientific rigour.”

Maintaining his research position, he renovated a stable-cum-hen-house on his parents’ farm and designed products. To pay for lab equipment, Dr FitzGerald turned to creative money-earning endeavours – as an expert court witness and harvesting fetal calf serum. Investing in expensive freeze-drying equipment, he left his job and began slowly raising sales. Initial progress was slow, often downright frustrating, but he persevered. Persuading Ulster Bank to loan him 41,000 euro helped.

Now with latest turnover figures showing a 26 per cent annual increase and last year’s figure touching 129-million euro, heis undoubtedly a model of entrepreneurial triumph. Many accolades acknowledge this fact, including a CBE and an honorary doctorate from the University of Ulster.

When contacted, Pearse Doherty, Sinn Fein economic spokesperson and a TD for the area, praised him highly.
“The entrepreneurial spirit shown by Doctor FitzGerald is extremely admirable, particularly for other aspiring entrepreneurs. Randox has committed itself to producing high-quality, innovative diagnostic solutions and over the last thirty years it has grown to become the success story it is today. The jobs in Dungloe will be professional, skilled positions in what is an exciting industry.”

Exports
With facilities in Antrim, Manchester, London, Donegal, the US and India, 95 per cent of Randox products are exported. Around 350 million patients every year are diagnosed in 145 countries using its technology and it makes 3.5 billion tests annually including 10 per cent of all cholesterol tests. It is the world’s third largest manufacturer of both clinical chemistry reagents and quality control tests and calibrators, has the largest toxicology test menu and around 200 patents.

The secret? Aside from his business acumen and a hardworking team, Dr FitzGerald places a strong emphasis on research. “We commit up to sixteen per cent of turnover to R&D each year with 400 new tests under development, probably more than any other diagnostics company,” he said, bringing up statistics on a screen. “Two more biochip systems will be launched this year.” He has also unveiled plans for a 219-million euro manufacturing and R&D facility, Randox Science Park, on a 47-acre Antrim site.

Tests created by Randox include those for cardiac risk, aspirin ‘resistance,’ bladder, prostate and colorectal cancer, ischaemic stroke, as well as ‘Adiponectin’ for Type 2 diabetes and ‘Confidante,’ the first OTC product to check for 10 sexually transmitted infections in one test.

Greater success seems inevitable due to the sector’s growth potential. “Though diagnostics is key for patient health with seventy per cent of clinical decisions based on pathology investigations, only half a per cent of healthcare budgets are spent on it,” he said.

Rather than wait for systems to accelerate uptake, Dr FitzGerald has established diagnostic clinics, with openings in London and Hollywood, County Down, and others planned.

The friendly managing director has also succeeded in pairing professional with personal contentment, referring warmly during a two-hour interview to his wife, Nuailin who has been by his side for many years. They first met while Nuailin, director of Randox Health, worked for the former British Overseas Trade Board and Peter visited, seeking new markets for his products.

“I came looking for export opportunities and found a wife instead,” he said turning to smile and receiving an affectionate knowing glance in return.