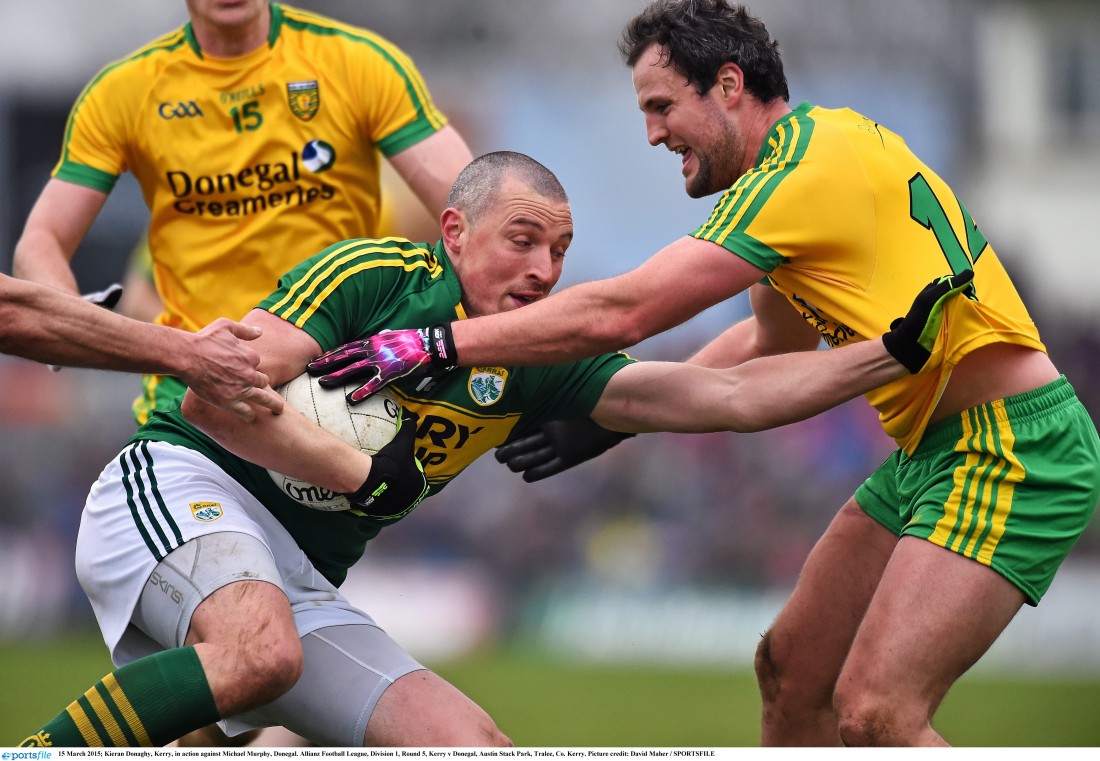 KERRY did enough to see off Donegal in a repeat of last year’s All-Ireland final at Austin Stack Park.

Donegal had stayed in touch throughout thanks to Ryan McHugh’s early goal, but the Tir Chonaill men just weren’t economical enough when it came to the crunch, with Michael Murphy’s late penalty scant consolation.

They had their noses in front thanks to a whirlwind start to the second half that yielded scores from Patrick McBrearty, Colm McFadden and Murphy, but they were rocked back on their heels when Kerry netted in the 45th minute.

Paul Geaney robbed Neil McGee of possession after the Donegal full-back’s superb winning of the ball initially. Geaney invitingly lifted the ball across goal for Keane to palm to the net.

It was anyone’s game until Kerry grabbed goal number two five minutes from time. Eamon McGee was penalised for a foul on Paul O’Donoghue after a Kerry attempt came back off the upright.

Midfielder Moran, who was excellent, converted the penalty. Donegal tried to rally, but an early spate of spurned chances meant that Murphy’s goal, also from a penalty, was a footnote in the tale.

Sheehan popped over two early points, but Donegal were back on level terms thanks to McBrearty and a 48m free by Murphy.

The Ulster champions bagged a goal on a quick-fire counter attack in the 11th minute. Hugh McFadden’s long ball was fetched by Murphy, who off-loaded to the rampaging Martin O’Reilly.

With Ryan McHugh bursting into space, O’Reilly transferred and the Kilcar man, the 2014 Young Player of the Year, tucked a superb finish beyond Brendan Kealy.

It was Kerry who responded better with four in a row in a four-minute spell from Paul Murphy, Keane, Moran and Sheehan.

The effortless, breath-taking kicking of Sheehan was worth the admission alone at times. Sheehan took his first-half tally to six points and opened up a three-point lead, but his half-time withdrawal blunted the Kingdom sword.

By the time they came up for air at the break, Murphy and Martin McElhinney pulled Donegal to within a point and, with the pot simmering, Rory Hickey called a halt as the participants got acquainted heading in the tunnel.

When Donegal burst out with three points in the opening four minutes of part two it set the tone for a riveting second half, but ultimately it was the Kingdom who prevailed.