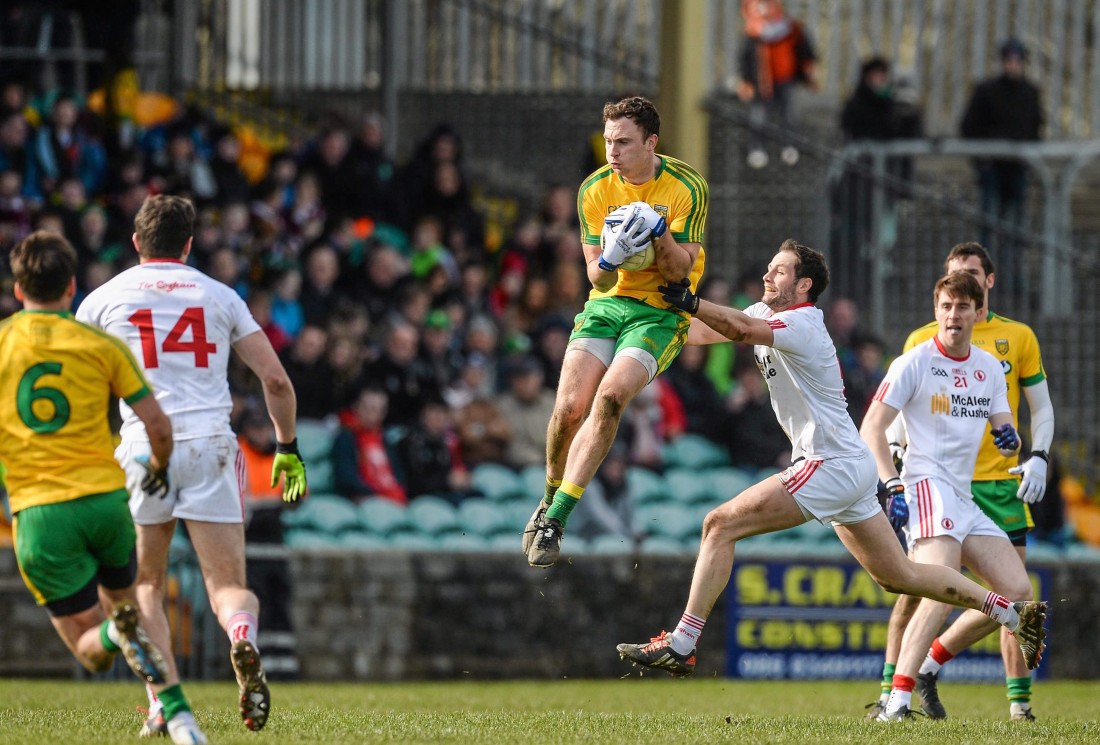 DONEGAL were utterly dominant against Tyrone in Ballybofey on Sunday, defeating the Red Hands by ten points to make safe their status as a top-flight county for 2016.

A statement like that from Harte, now in his 13th year as the Tyrone manager, certainly sends alarm bells ringing, although an Ulster Championship meeting with Donegal in seven weeks time, back in Ballybofey, should be enough to garner a significant response.

On the evidence of this, a crunch clash with the victor knowing that survival would be all-but secure with the vanquished almost certain to be heading for Division 2.

Donegal set the tone from early doors here and had a number of top-class display. Michael Murphy’s free taking was worth the admission money alone, three times the captain imperiously slotted over from 50 metres and more.

Murphy’s overall display – until a 60th minute black card ended his afternoon – was inspirational and Martin McElhinney, a late inclusion into the starting line-up in place of Paddy McGrath was another to shine, the St Michael’s man turning in an excellent game, until he, too, was black carded four minutes from the end.

Tyrone never got to grips with the game, with Neil McGee, Frank McGlynn and Karl Lacey all excelling in defence for the home side before a healthy attendance of around 8,500.

The first half was Donegal’s best 35 minutes of the campaign and with a nine-point lead, 1-9 to 0-3, at the changeover, it could hardly have gone much better.

The clocks went forward overnight and, while Tyrone looked like they’d forgotten to advance their timepieces, Ryan McHugh’s timing was impeccable as always.

In the 32nd minute, the Kilcar man pounced for his second goal in as many games.

Hugh McFadden seemed poised to net after Frank McGlynn’s effort came off the upright. Sean Fox, in as a replacement for Niall Morgan (who had a groin injury) after 20 minutes, and a posse of Tyrone defenders helped crowd out McFadden, but McHugh crashed home when the ball spilled loose.

Donegal had wasted no time in getting off the mark, Odhrán MacNiallais winning the throw-in to set Murphy up for a point on ten seconds.

Murphy followed it up by landing a magnificent free from 55 metres.

McElhinney and the rampaging Neil McGee put Donegal three ahead, but Tyrone hit back through Ronan O’Neill and Connor McAliskey. Tyrone’s front division lacked the necessary bite to trouble Donegal, not even the introduction of Sean Cavanagh at the break enough to inspire a lift.

After McGee’s sheer power held off Justin McMahon, the full-back teed up McElhinney, who steadied himself under pressure to score his second of the day.

Two frees from Murphy, the second of which he boomed over from 60 metres, stretched the lead further before McHugh struck gold.

MacNiallais pointed in added time at the end of the half and, against the breeze, Murphy continued his good form after the restart, sailing over a 50-metre free.

Peter Harte ended a half-an-hour Tyrone drought, but it was already something of an ordeal for the Red Hands as Donegal took complete control of it and Colm McFadden came on for a record-breaking 160th game in the county’s colours.

McHugh might’ve had a second goal, but he was denied by a Justin McMahon block after the excellent McElhinney drove through.

McGlynn and Patrick McBrearty pointed for Donegal, who lost Murphy and McElhinney to black cards in the closing ten minutes, the captain’s ruling him out of Sunday’s trip to Castlebar.

Late in the day, Donegal ensured they kept a clean sheet too, with goalkeeper Michael Boyle saving from PJ Lavery. Boyle was handed a start, his first in the League in five years, after Paul Durcan was involved in a car accident on his way to Donegal from Dublin on Saturday.

The surprise here was in how easy Donegal had it, but the danger is to think it’ll be a repeat in May.

“I expect the full force of Tyrone in May,”  was Rory Gallagher’s prediction.

For now, though, this represented his best game in these early days of his tenure as Donegal’s manager, even if they were keen to play down its significance.