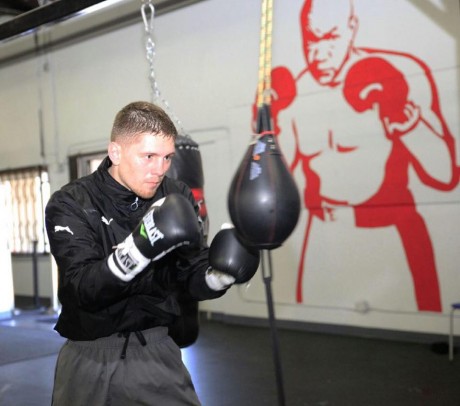 JASON Quigley has been backed by Oscar De La Hoya to ‘dominate’ Lanny Dardar in Los Angeles on Friday night.

Quigley takes to the ring for the first time in 2015 when he meets Dardar at the sold-out LA Fight Club premiere at the Belasco Theatre in Downtown LA.

De La Hoya, the founder and President of Golden Boy Promotions, who snapped up Quigley last spring, has tipped his man to take his record to 4-0 against Dardar, who has also had 19 fights in Mixed Martial Arts (winning 13, losing 6).

“Jason Quigley has dominated his opponents in all of his fights since turning pro last year, and his bout at LA Fight Club on March 6 will be no exception, I’m sure,” De La Hoya told the Donegal News.

“Quigley is going to be one of the highlights in the ring.

“I’m proud of what he’s accomplished, and I know he will make the fans back home in Ballybofey proud once again after Friday’s fight.”

None of Quigley’s previous three pro fights went the distance. The Finn Valley star took just 82 seconds to dispose of Reece, Najera gave up after three rounds and McCoy was sent spiraling to the floor 2 minutes and 39 seconds into their clash in October.

While Dardar appears to represent a step up in class, Quigley is in confident tune.

“I know my opponent will be in my face all night so it’s shaping up to be a good one,” he said on Wednesday.

“Camp has been amazing. I’m feeling great, I love what I do and I’m ready to put on a show on Friday!”

The President of the Donegal Boxing Board, Raphoe’s Peter O’Donnell, hopes Quigley will take his record to 4-0. “Jason is a fine ambassador for Donegal boxing and, on behalf of myself and all the boxing clubs in Donegal, I want to wish him every success in his next fight,” he said.

“Jason deserves everything he gets out of boxing because he puts so much into it.”