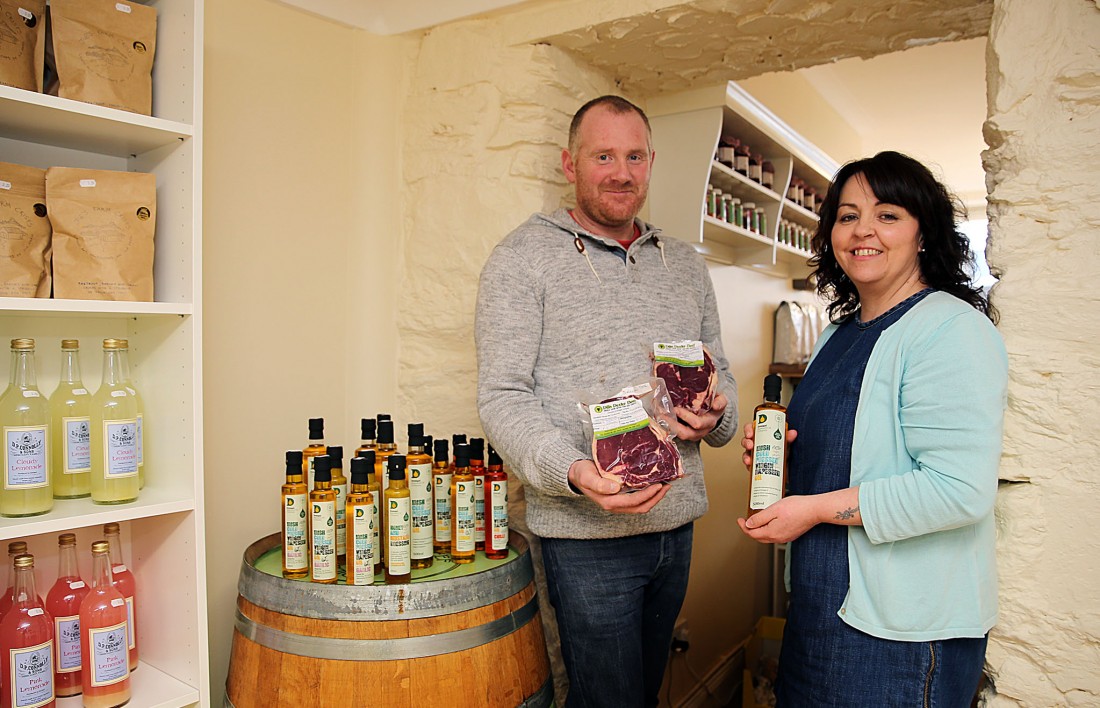 WHEN Kerrykeel farmer Sam Dill introduced the diminutive Dexter cow to his herd in 2009, he had no idea that he would go on to have one of the largest and most sought-after herds in the country.

Dill’s Dexter Beef is now a name synonymous with excellent quality meat, not just in Ireland, but into Europe too. So widespread has the demand for the rare gourmet beef been, that the Dills opened their farm shop in Letterkenny this week to make it more accessible.

Dexters are native Irish cattle which had almost died out, but incentives were offered by the Department of Agriculture to farmers who were interested in reintroducing the breed. Until 2009, Sam from Ballymagowan, had been a regular commercial farmer but always held an interest in rare breeds. However, once Sam and his wife Cathy tasted the beef during a visit to another Dexter farm, they knew that this was the route they wanted their enterprise to take.

Dexter cattle are the smallest of the European cattle breeds, being about half the size of a traditional Hereford and about one third the size of a Friesian milking cow. The distinctive flavour of Dexter meat, however, and the proven health benefits are making this specialist product a desired one among chefs and lovers of good food.

Cathy told the Donegal News: “In 2009 we hand-picked all of our breeding stock from the UK and Scotland and got a great bull from Northern Ireland. However, it wasn’t until the end of 2011 that we could 100 per cent guarantee it was Irish beef. Our first Irish-born, Maisie Moo, is five now and will always be here – she’ll never be sausaged. All our animals are birth-notified to the Dexter Society and they are all pedigree and all named – they have to be.”

The annual bill for animal feed is also one that most farmers would be jealous of, Sam explained: “We only feed a small amount of meal to the calves when they’re weaned off their mothers. My feed bill would be in the region of €2,000 whereas for a herd of limousins or charolais you could be looking at a bill ten times that.”

Referred to as the small cow with a big taste, Sam explained what makes Dexters, a high-end gourmet meat, different. “The taste has a lot to do with the breed and the fact the beef is allowed to mature longer. By their nature, Dexters are foragers and will look for wild heathers and wild herbs and that’s what their diet is based on. They’re like lawnmowers and will graze everything in front of them. We have land rented off the end of Rosapenna golf club where the cattle ate all the reed beds and nettles, I’ve never seen that before.”

Their constant proximity to the sea also impacts on the taste and most of the cattle are wintered on sandbeds at Ballyheerin Bay. Cathy added: “We get our animals slaughtered locally by Anthony McGettigan in Milford so they literally have a five minute journey before they go to slaughter. They have no stress and don’t really know what’s happening, unlike the bigger abattoirs where the animals get tense and the meat gets tougher.” 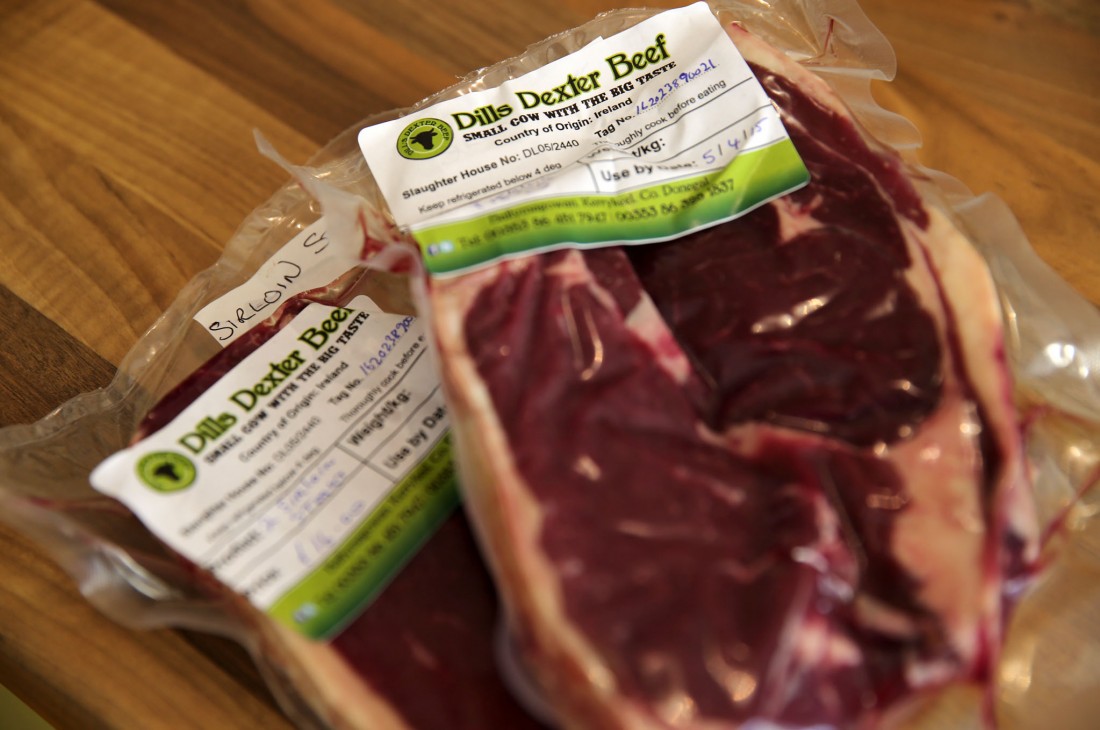 “Of course there are a lot of great butchers out there but Dexter meat is very different and has a different taste. The cattle are generally two-and-a-half before they go for slaughter and are 100 per cent grass fed. Even during the fodder crisis of 2013, we weren’t affected because the Dexter only eats half the amount of a large commercial cow and we had the grass here.”

A strong presence on social media has also resulted in enquiries and orders coming in from overseas, Cathy explained: “We have an order from a hotel in the Dordogne in France as well as a family in Spain who are looking to buy an animal and they’ll split it. “We’ve also worked with Linda Booths’ Cookery school in Dublin and had great support from a number of celebrity chefs in particular, Ramelton Chef Gary O’Hanlon.”

Since the Dills started bringing their Dexter meat directly to the public at shows and farmers markets across the county, there has been a growing interest in the product.

“People were always asking where they could get it on a regular basis. We considered doing deliveries, but people don’t want big boxes of meat. We started looking at premises before Christmas and when we found the new shop at Lower Main Street, Letterkenny, it felt just right.
“The farm shop will be an outlet for us to bring Dexter beef to the people of Donegal but we have also been working with other producers and will supply other specialist products that aren’t available anywhere else in Donegal. We will have a limited supply of our own grass fed lamb for Easter, but we are getting Connemara lamb and their white and black pudding and sausages too. It’ll be somewhere different in Letterkenny for people to come and it will be a different experience.”

Cathy concluded: “The response to the Dexter beef has been unbelievable. At the start, people did laugh at Sam because the Dexter is half the size of a Limousin or a Hereford; but now people are going away saying that this is how beef used to taste years ago.” 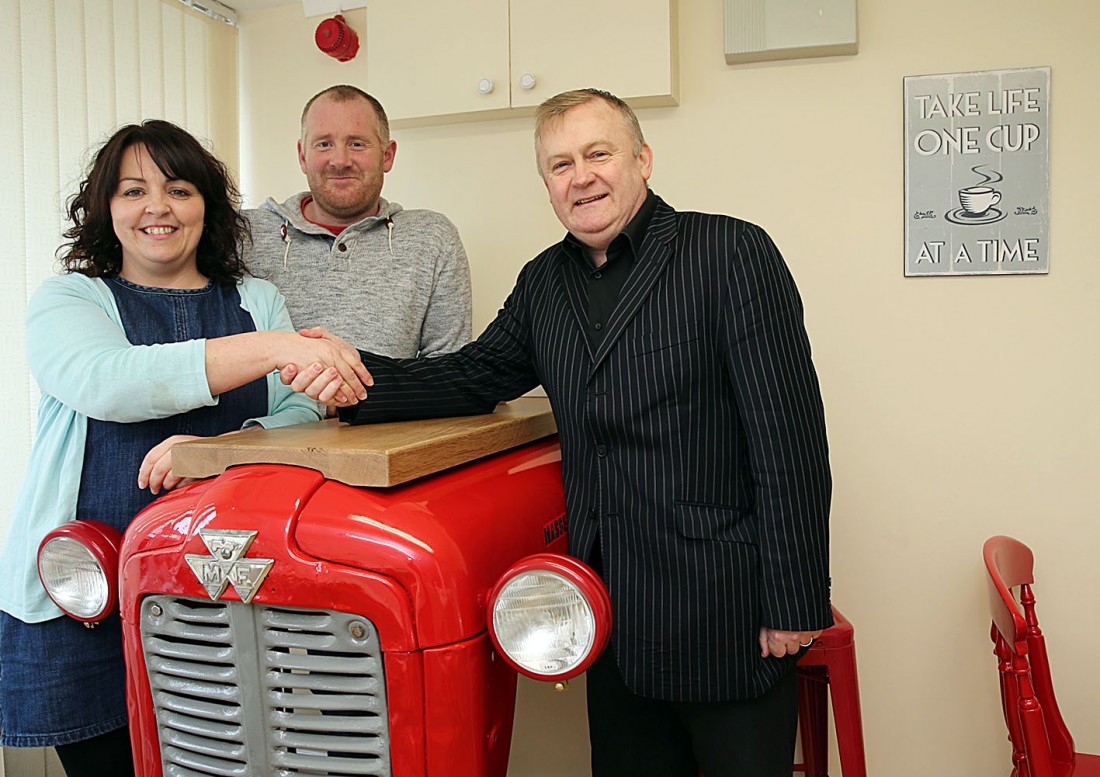