Advertisement
HomeSportSoccerVideo: Shay Given searches for a new lease of life at Aston Villa after impressing in Leicester win
Advertisement 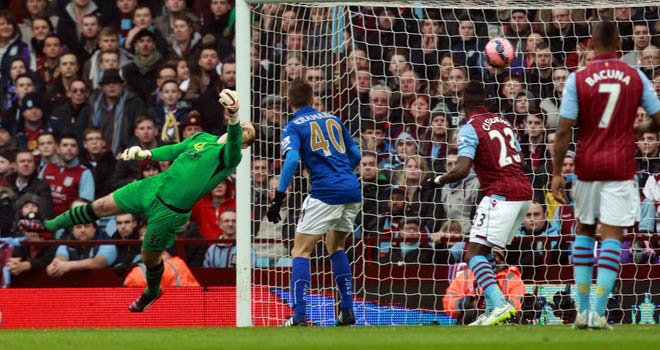 Shay Given makes a fine save to thwart Matt James last Sunday.

WHEN Shay Given joined Blackburn Rovers in 1994, Tim Sherwood was a star at Ewood Park.

Legend has it that Kenny Dalglish, who was the Rovers manager of the time, had expressed an interest in signing Zinedine Zidane, but Jack Walker wondered of Dalglish “Why do you want to sign Zidane when we have Tim Sherwood?”

On Sunday, Sherwood watched Aston Villa for the first time as the club’s manager, sitting in the stands as caretaker manager Scott Marshall guided the Villians to a 2-1 win over Leicester City in the FA Cup.

A result that guided Villa to the last eight for the first time since 2010 had Given’s fingerprints over it. The Lifford man, who turns 39 in April, reminded Sherwood, his old team-mate, of his class with a Man of the Match display.

Now, all eyes are on Saturday at Villa Park when Sherwood takes charge of the side against Stoke City. For Given, it could be the chance to revitalise a career that has been stunted by successive seasons on the bench.

The 126-times capped Republic of Ireland goalkeeper is hopeful that Sherwood will return him to the number 1 post.

“When the new manager comes in it’s a clean slate for everyone. I have plenty to offer and I hope that Tim sees that today,” Given said after Sunday’s game.

“He’s always been a leader and was always a very good skipper.

“He was the main man in the changing room. He was the go-between with the players and the manager.

Villa have taken just 22 points out of a possible 25 but Given, whose only other appearance this season was the FA Cup third round tie against Bournemouth, is hopeful that Sherwood can rise them from Paul Lambert’s fire.

He said: “I’ve not worked with him as a coach or manager before.

“But being out there in our first training session it’s obvious he knows what he wants from the team, and how he wants us to play.

“He was very positive, he’s always a positive guy. He told us (against Leicester) to go express yourself, keep shooting and use Christian’s (Benteke) strength.

“We have to take confidence. We scored two goals, we have struggled to score goals. We will take belief from that as well and use this momentum to take into our league games.”

Brad Guzan had been Lambert’s number one, but Given reminded Sherwood of his brilliance on Sunday. Voted man of the match, the pick of Given’s portfolio was a stunning save to deny Matty James, reaching full length to thwart the Leicester man.

Given didn’t play at all for Villa in 2014, his last appearance before the Bournemouth tie coming in January 2013 against Milwall. A fine loan spell at Middlesbrough proved successful, but a move away from Villa didn’t materialise.

He’s in the winter of his career, but Given isn’t prepared to step down in class. If selected by Sherwood on Saturday, he’ll have played for his 17th different manager in the Premier League – a record.

It is to the selection of possible boss number 17 that the eyes turn to on Saturday. Perhaps that save from James on Sunday will sway Sherwood’s mind towards his old Blackburn colleague.

The roster posted by Sherwood this weekend will be interesting – not least to see if it hands Given a new lease of life. His career needs one, last hurrah – this could well be it.