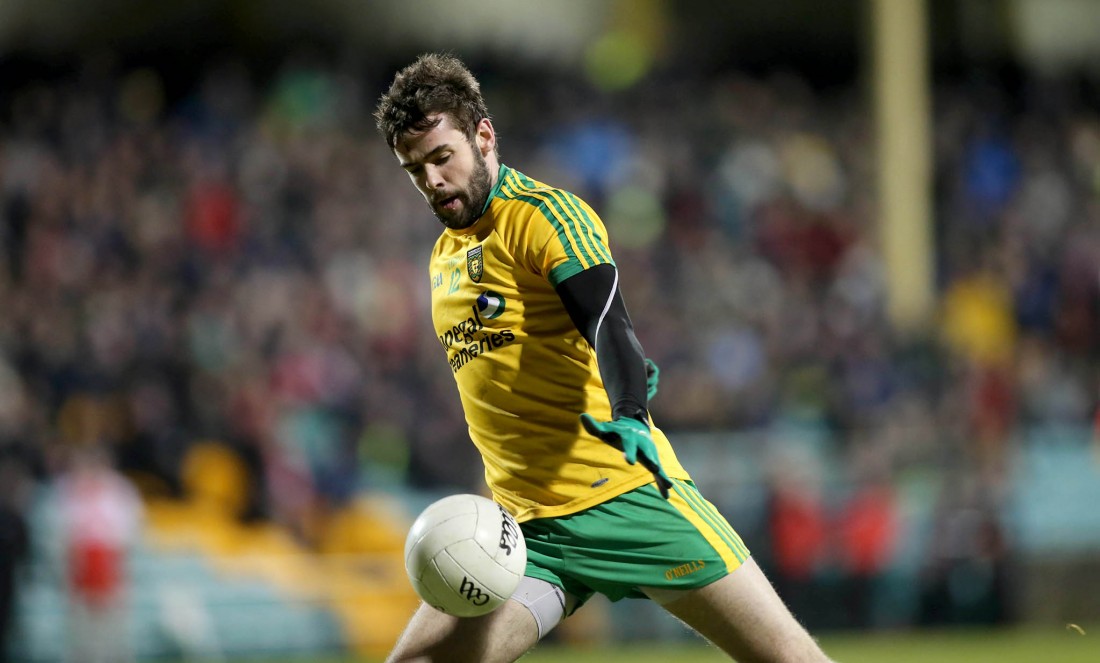 Donegal’s Odhrán MacNiallais on his way to scoring his second half goal.

ODHRÁN MacNiallais struck gold on Saturday night to pave the way for Donegal’s win over Derry.

The Gaoth Dobhair man riffled to the net in some style for a goal that came just after Michael Murphy cracked a penalty off the crossbar.

“It was some effort – I was standing out the middle of the field and heard the ping of the crossbar,” MacNiallais remarked.

The sides were on level terms, eleven apiece at the time, when MacNiallais’s moment of magic arrived.

Martin O’Reilly and Christy Toye were involved in the build-up with Toye setting MacNiallais on his way.

Instinct in these moments is a deadly tool and MacNiallais didn’t need to wait for an invite.

He said: “The first thing on my mind when I got the ball was a goal. I didn’t realise that I was as far out. Thankfully it hit the back of the net.”

MacNiallais found the net in last year’s All-Ireland quarter-final win over Armagh at Croke Park and has started 2015 where he left off last term.

Donegal came good after a disappointing first half in which they found themselves three down.

MacNiallais said: “The first half wasn’t perfect, but it’s perfect to get the winning start at home. We have to make MacCumhaill Park a fortress so it’s great to get the two points here and get the win.

“It’s hard to get going on the heavy pitches at this time of the year. Donegal have been known as a second-half team in the last few years. We seem to come out and play better in the second half.”

At times it was like last May all over, when Donegal came good in the second half to dump Derry out of the Ulster Championship. Again on Saturday night, Donegal turned the screw just after half-time.

MacNiallais said: “It wasn’t really the plan – that’s just the way that the game played out.  We did let Derry come at us a bit. We were still in the game at half-time, there were only three points in it and we knew that we could push on from there with the breeze.

“We knew we were in a good position. He wasn’t overly happy, but happy that we were still in the game.”

In the opening minute of the second half, Martin McElhinney got on the scoresheet and and helped turn the tide.

MacNiallais said: “Martin made a massive difference. He’s very direct and has a lot of power. He showed that with the point he got straight away in the second half. He got us motoring and that was a big lift.

“We got going very well in the second half. Patrick McBrearty kicked some unbelievable scores so it’s a massive boost to be getting those boys kicking points.”

Donegal are back to the capital on Saturday night where Dublin lie in wait at Croke Park. MacNiallais said: “That’s a massive one. The Dubs will be out to get us. Hopefully we can put up a big performance again next week.”