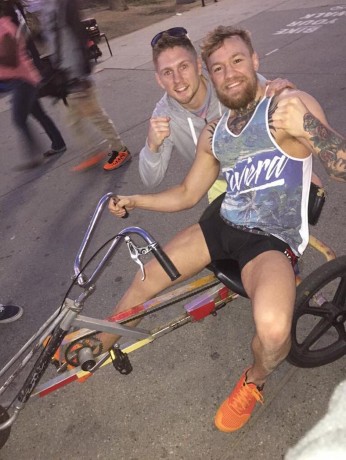 The Notorious recently caught up with Quigley in Venice Beach, California, over the weekend and are expected to do some training together this week.

While Quigley’s exploits as an amateur boxer are well-documented, McGregor was also a talented Southpaw amateur boxer before turning to Mixed Martial Arts.

The two fighters first met up last month while they were in Boston to help launch “Battle of the Bay’, a charity boxing event organised by Bucnrana man Mark Porter.

Quigley (3-0) will meet Lanny Dardar (2-2-2) in his fourth professional fight next month in Los Angeles.

The fight is part of a new boxing series in LA, ‘La Fight Club’, with the opening night of action taking place at The Belasco Thearte on Friday, March 6.

The series is to be screened on Fox Sports and Golden Boy Promotions are confident that the Quigley-Dardar fight, a four-rounder, will be televised.

Conor McGregor is preparing for his shot at the UFC Featherweight title against Jose Aldo at UFC 189 on Saturday, July 11.