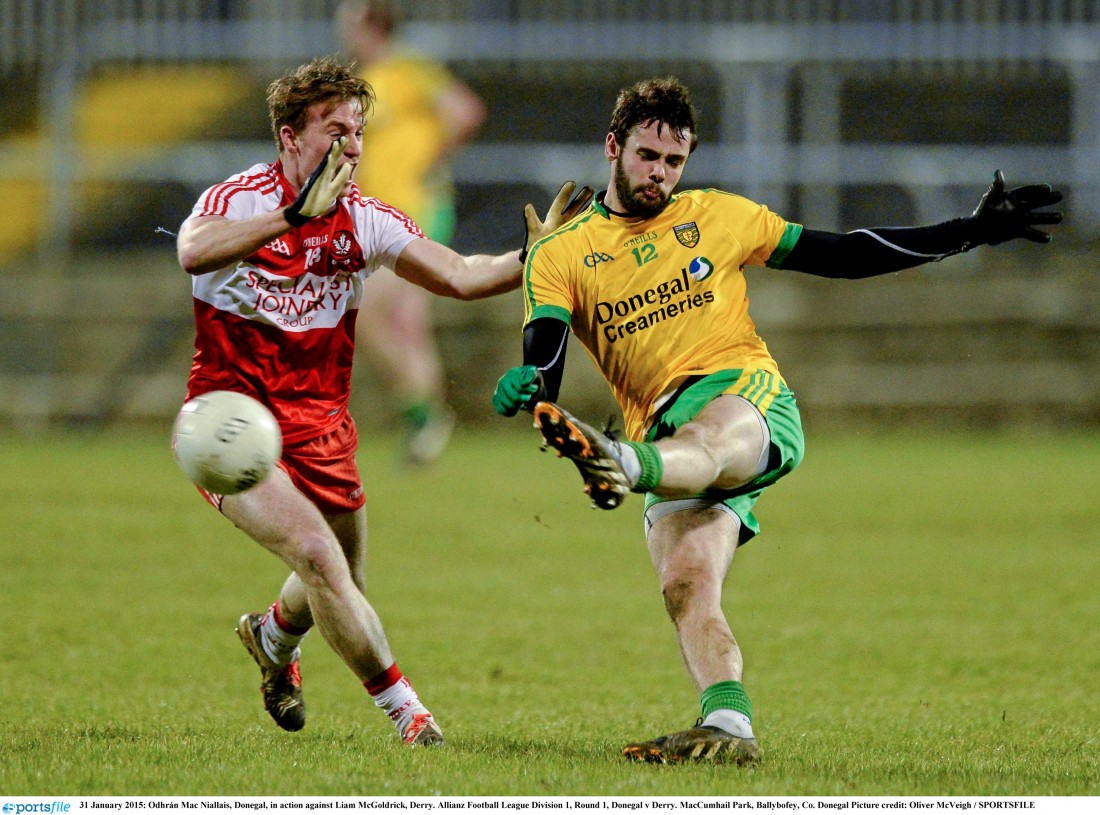 DONEGAL came good for a second half surge that took them to a win over Derry at MacCumhaill Park on Saturday night.

Rory Gallagher’s side overturned a three-point deficit at half-time to win by six following an encouraging second half.

Odhrán MacNiallais netted the goal seventeen minutes after the re-start, slotting past Thomas Mallon after being put in by Christy Toye. MacNiallais’s instinct in these moments is always goal – and the Gaoth Dobhair man made no mistake.

The goal came a minute and a half after Michael Murphy thumped a penalty off the Derry crossbar after he was adjudged to have been fouled by Niall Holly.

With Toye and Neil Gallagher immense for Donegal and with Martin McElhinney having been introduced at the break, the home side took charge in their customary third quarter.

Murphy lined out at the edge of the square for part two having spent the first half in a roaving role and the Oak Leaf couldn’t cope with the Donegal captain. Patrick McBrearty kicked five points on a night that saw him turn in one of his best displays in the county jersey.

Emmett McGuckin opened the scoring for Derry in the third minute when he fired over aftrer intercepting a misplaced kick-out from Paul Durcan.

McBrearty, Martin O’Reilly and Toye responded for Donegal, but Derry were soon in control, spurred on by captain Mark Lynch.

A superb point off the outside of Benny Heron’s left boot had Derry ahead and Lynch aced two brilliant long-range frees.

Three in-a-row from Lynch had Derry four up, but Donegal came back to within a goal by the changevover through a Michael Murphy free.

Donegal had a blistering start to the second half and scored four-in-a-row to get their noses in front.

Derry briefly got back on level terms, but MacNiallais struck gold as Donegal scored what turned out to be a comfortable win in the end.

McBrearty hit a wonderful score from a difficult angle and Derry ran out of steam as Donegal finished well with Murphy scoring twice, either side of a huge point from Toye.