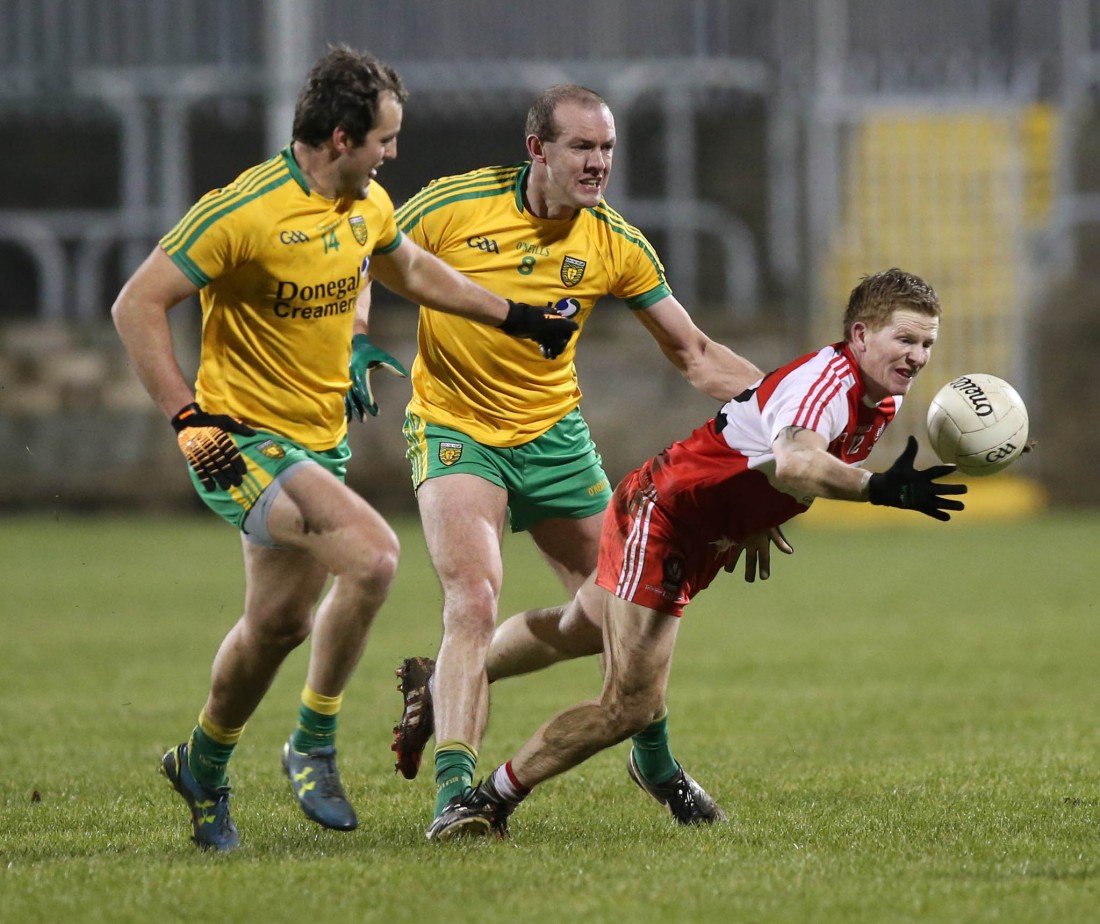 A NEW season and yet the same, familiar debate when it comes to Michael Murphy.

Donegal came from behind on Saturday night to get their Division 1 campaign off to a winning start, defeating Derry 1-15 to 0-12 in Ballybofey.

Odhrán MacNiallais bagged the goal to get Rory Gallagher a win in his first League game as Donegal manager. That came shortly after Murphy smacked a penalty off the Derry crossbar.

Murphy had a roaming role in the first half, but with Donegal 0-9 to 0-6 in arrears, Gallagher sent on Martin McElhinney and posted Murphy to the edge of the square.

The already-booked Niall Holly had a torrid evening and was deemed, albeit harshly, to have fouled Murphy in the incident that led to the penalty.

“It’s wherever the team needs me really,” Murphy mused afterwards.

“Rory and the management are very, very smart and wherever they see me positioned is where I’ll go to. I’m just delighted to try and develop in all the positions and get that chance to be honest.

“We’re just trying to be dangerous. Today, in patches, it went and it was patchy enough for myself but it’s only early in the year yet and I’ll get there.”

Murphy and Patrick McBrearty each scored five points and for McBrearty it resulted in Setanta Sports’ Man of the Match award winging its way to Kilcar. After MacNiallais’s goal, McBrearty spun for a wonderful point from out on the right flank to raise the roof.

4,550 turned up for Gallagher’s opening League game and it was certainly an encouraging second-half. With Murphy and McBrearty on fire, Donegal also had Martin O’Reilly continuing his good early-season form, while the experience and guile of Neil Gallagher and Christy Toye proved key.

Gallagher says that the lure of the big stage was too hard to turn his back on in the wake of last year’s All-Ireland defeat. Next Saturday evening, Donegal return to Croke Park for a joust with Dublin, who lost to Cork at Páirc Uí Rinn on Sunday.

Defending League champions Dublin fell to defeat after Cork hit five of the game’s final six points to take a 1-15 to 0-16 win.

The stakes are considerably lower than in August, but the memories of their epic All-Ireland semi-final of last year will be in the hearts and minds of many this week.

Midfielder Gallagher, who was imperious against Derry, can’t wait to get going.

“Any time we have gone to Croke Park, there has been a big, big Donegal support,” he said.

“There are loads of Donegal people living in Dublin and they’re all mad to get there. We’ve been very lucky to have played there a lot.”

On his own performance Gallagher was typically modest – insisting he was ‘in middling aul shape’ – but the 31-year-old Glenswilly man is eager for Donegal to stay at the top.

He said: “The All-Ireland was disappointing and it takes a wee while to get over that.

“We’ve been lucky to play in some huge games in the last few years. Nothing replaces that.  They’re great to be involved in.”