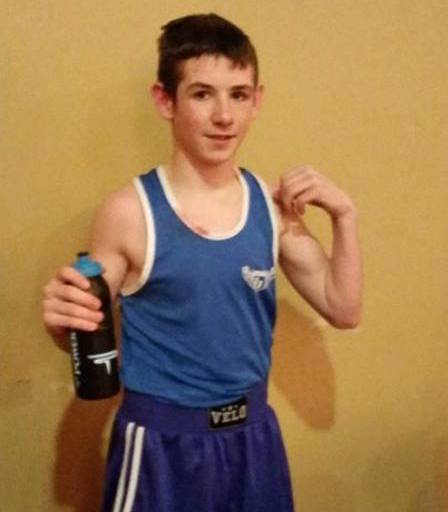 ORAN Wallace of Dungloe powered his way into the Ulster 9 Counties final after an impressive win over Cookstown’s Ruairi Devlin.

The wintery weather didn’t have an adverse effect in the 9 Counties Championships for Boy and Girl 1, 2 and 3, which were held at Burnfoot’s Halfway House.

In the Boy 3 48kgs semi-final, Wallace, a classy southpaw, caught the eye in a fine win. The Wallace name is synonymous with boxing in Dungloe and he won through to Saturday’s final, being held again in Burnfoot.

In the Boy 3 50kgs division, Convoy’s Ryan Ward Mulrine was red hot as he out-classed Ethan McDonagh of Omagh’s Sacred Heart to reach the final.

Bluestack boxer Michael Patrick Ward, in the Boy 3 70kgs class, had too much for Dylan Mischenki from Cavan, Ward turning in a brilliant bout to reach next weekend’s decider.

Dunfanaghy’s Odhran Doogan gave a gutsy display in the Boy 1 44kgs semi-final, but he lost out in a split decision to Martin Stokes from All Saints in Ballymena.

On Saturday, Letterkenny’s Dylan Browne McMonagle defeated Aaron Treanor of Emyvale to reach the Boy 1 31kgs final, while Adam Hall from Dunfanaghy will contest the Boy 2 36kgs final after a win over Springtown lad Tiernan Conway.

There was defeat, though, for a number of Donegal punchers on Saturday.

Raphoe duo Orin Devine and Liam McMonagle lost out in their contests. Devine was pipped by Ethan McDonagh (Sacred Heart, Newry) at Boy 3 50kgs while McMonagle was stopped in round 2 by Shane O’Gorman from St Malachy’s Newry in the Boy 2 44kgs class.