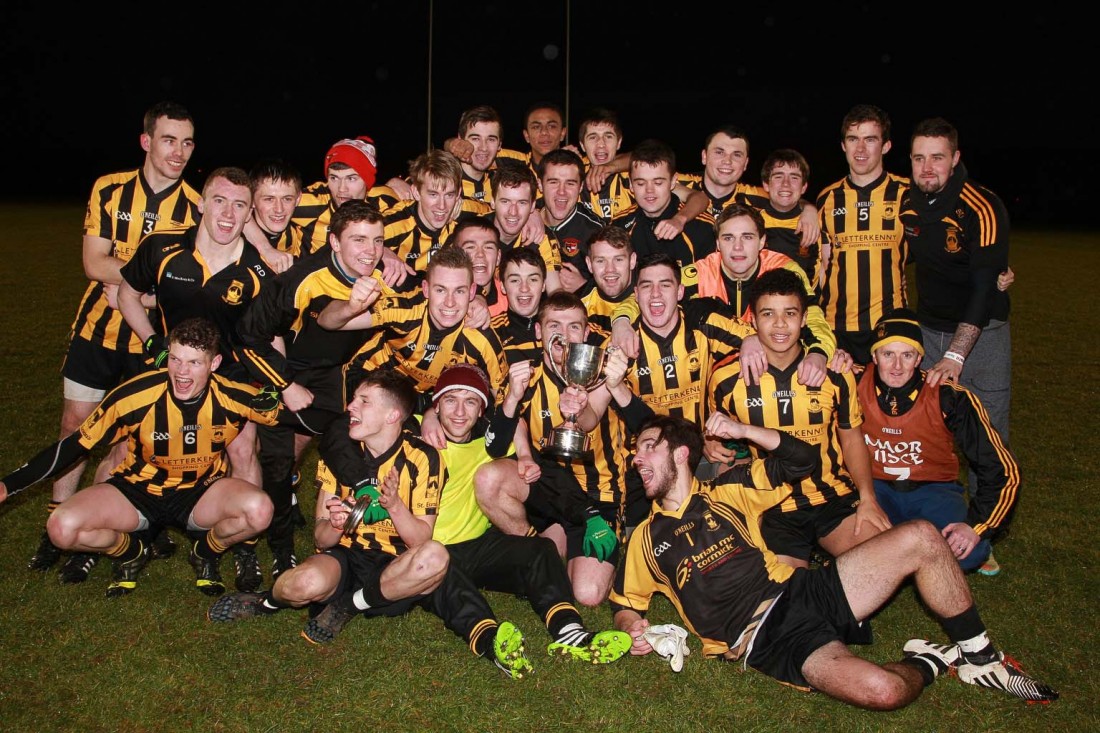 St Eunan’s celebrate their win in the U-21 final over Kilcar. Photo: Brian McDaid

ST EUNAN’S Under-21s are without ace marksman Sean Hume for Saturday’s Paddy McLarnon Ulster Under-21 Tournament quarter-final against Down champions Warrenpoint at the Kickhams Creggan club in Antrim (throw-in 1.30pm).

Hume is abroad on a family holiday, leaving manager Noel Keaveney without a player who scored a stunning 2-6 against Kilcar in the Donegal Under-21 final in Convoy last month. With the last play of the game, Hume snatched victory for the black and amber, gunning down the defending champions with a goal that fired Eunan’s to their first Under-21 title in eleven years.

“It is a huge blow for us,” Keaveney said of Hume’s absence for Saturday’s clash.

“Sean is a fantastic player and obviously his free-taking has been a big part of our season. To score 2-6 in any game is significant, but to do it in a final against a team like Kilcar – who were the defending champions – is something else. He has been excellent for us in all of the game so it’s disappointing that we won’t have him.”

Keaveney is also planning without John Foley, another who is on holiday. Although he didn’t play in the final, Foley played in the previous three Under-21 Championship fixtures.

Keaveney said: “These holidays have been planned for a long time so it would be very unfair to ask either of them to give up on their plans.”

Michael Miller and Dara McMonagle made good impacts off the bench against Kilcar in the Donegal final and will both come into contention for this weekend’s game.

Kilcar had led the Donegal decider by seven points at one stage, but Eunan’s refused to wilt.

Darragh Mulgrew’s goal had kept them in check and when Kilcar threatened to pull away, Hume netted his first after captain Lee McMonagle intercepted Kevin Boyle’s kick-out.

Still, Kilcar looked to have the winning of it, only for Hume’s late intervention to seal a dramatic win.

Keaveney said: “We have a never-say-die attitude and we keep going for sixty-plus minutes. We got our just rewards for that in the Donegal Under-21 final.

“We were well ahead in the first 20 minutes, but we gave away a bad goal to Eoin McHugh. The most disappointing thing for us was the first ten or twelve minutes of the second half, when we let Kilcar get four unanswered points. We lost out way a small bit, but we dug deep and managed to get Kilcar on the back foot.

“We pushed up on them a bit more than we had been and we didn’t allow Kilcar to build from the back like they’d been doing.”

“A lot of people thought that we were dead and buried, but we came from seven down to win it.

“We have a lot of experience in the dressing room. Conor Parke made his debut for the county seniors on Sunday, which was great for Conor. We’ve four or five lads with the county under-21s too and that experience is fantastic. It’s brilliant for their ongoing development and also for the development of the club, which is ultimately why we’re all here doing what we’re doing.”

Defender Parke is set for a busy weekend. After making his Donegal senior bow on Sunday against Derry, he is named again to play against Queen’s this Sunday in Ballybofey. Keaveney can also call upon the likes of Sean Daffan, Connall O’Boyle, Conor Morrison, McMonagle, Mulgrew, Oisin Carr and Rory Carr who are among those to have been involved with St Eunan’s at senior level.

Keaveney said: “It’s great to get a chance to play in a competition like this against the best teams in Ulster. It’s a fantastic yardstick for our players to get and it’s a challenge to see where we stand against the elite from Ulster.

“We were in Ulster with the minors in the St Paul’s Tournament three years ago and they lost to Watty Grahams, the masters of that competition. It’s a great experience for these lads to get a chance to represent Donegal in Ulster.”

Several of Saturday’s opponents are expected to line out for the Warrenpoint senior side against Kerry’s Ardfert in the All-Ireland Intermediate Club semi-final in Portlaoise on Sunday, January 25th.

Warrenpoint defeated Burren 4-7 to 2-8 to capture the Down Under-21 title. Managed by Bernie Ruane and coached by Declan Mussen, Warrenpoint scored the win thanks to goals from Donagh McAleenan, Conor Austin, Niall McGovern and Aaron D’Arcy. Warrenpoint captain Ciaran McCartan as well as Jamie Grant and Michael O’Hare are others to watch out for. Last year, Clonoe ended their run at this tournament in the semi-finals.

St Eunan’s boss Keaveney said: “It’s into the unknown for us. We don’t know an awful lot about Warrenpoint, but their men’s team is in the All-Ireland Intermediate semi-final and a lot of these under-21s are the backbone of that side.

“Clearly they’ll be training very hard, they are a decent side when they’re playing in an All-Ireland semi-final. They will be formidable opponents for us to deal with.”