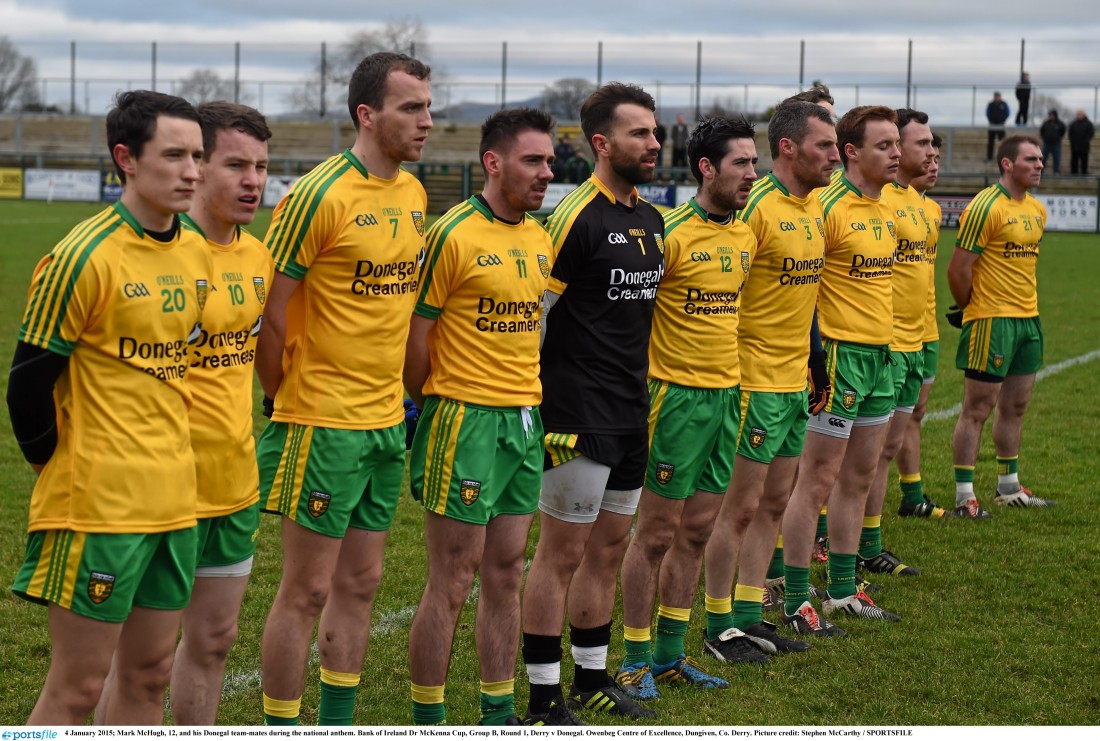 The Donegal team line up before the game.

REPORT BY CHRIS MCNULTY AT OWENBEG

THE Rory Gallagher era got underway with an eleven-point McKenna Cup defeat to Derry at Owenbeg, but it was very much an experimental side sent to the trenches by the new manager.

Derry ran out comfortable and convincing winners, pulling clear in the second half when they overpowered Donegal at midfield and it had petered out by around the midway point of part two.

The turning point arrived with Derry’s first score, a neatly-taken goal by Emmett McGuckin in the 16th minute, rolling past Michael Boyle from close range.

Donegal had posted an early two-point lead courtesy of Willie Gillespie and Martin O’Reilly, but it was an afternoon when the visitors didn’t bring their shooting boots to the feet of the Sperrins.

Five times in the opening fifteen minutes, Donegal registered a wide and that tally stretched to ten at the interval.

Dermot Molloy and Martin McElhinney, who was the captain for the game, were the only two players yesterday who had featured in last year’s All-Ireland final; none of the starters from that game against Kerry were even in the panel here.

Gallagher handed first-ever Donegal starts to four players, including 33-year-old Eamon Ward, a native of Clontibret in County Monaghan who now plays for Glenswilly. St Eunan’s Conor Parke, Kilcar’s Ciarán McGinley and Eunan Doherty of Naomh Conaill joined him in making their bows at this level.

Kilcar’s highly-rated Eoin McHugh, son of 1992 All-Ireland winner James, started in the half-forward line having played just once previously in the McKenna Cup, against St Mary’s in 2013, while the likes of Gillespie and Cory Gallagher had also appeared in that campaign.

The big news, though, was the return of Mark McHugh, whose last game for the county was the 2014 Division 2 League final against Monaghan. The 2012 All-Star is back on board under the new regime, while there were debuts off the bench for Joe Gibbons (Glenswilly), Ryan Malley (Ardara) and Malachy McDermott (Moville).

By contrast, Declan Brown was the only newbie in the Derry XV.

The Oak Leaf side were out-of-sorts to begin with, but McGuckin’s goal was just the tonic.

Skipper Mark Lynch fed the Magherafelt man and after stealing a march on Ward, whom he had the measure of throughout, the full-forward struck past Boyle into the far corner. Derry led for the first time and it was a lead they wouldn’t surrender.

Enda Lynn and Brian Óg McAlary fisted points and McGuckin opened up a four-point lead by the 21st minute.

Molloy was showing well for the ball, but the Glenties man had a frustrating day, kicking five wides, although he did well to convert a ’45 late in the half. With O’Reilly and the returned Gary McFadden on the mark with frees, Donegal trailed by the goal at the short whistle.

Lynch kicked two frees in the closing moments of the first half and the midfielder opened the second half with another effort from a placed ball. Daniel McKinless got in on the act after Barry McGoldrick magnificently dispossessed McFadden.

McGuckin drilled wide when given another sniff of goal and it took a fine save by Boyle to turn over from the impressive Conor McAtamney in the 48th minute.

Donegal kicked only two points from play, Molloy scooping over the second in the 49th minute after Gillespie’s early effort had opened the scoring. Derry were cutting through at will now, though, and Donegal had trouble picking up possession from kick-outs with Derry effectively dominating this sector.

Daniel Heavron landed the point of the game when he boomed over from just shy of the ’45 and Derry tacked on points from McAtamney, Benny Heron, McGuckin, Mark Craig and another of the McGoldrick clan from Coleraine, Liam.

Donegal will continue to experiment with the new faces in the home games against Queen’s and Fermanagh.

So, an eleven-point loss signals the start of the new age. The relevance of these results is perhaps best told by the fact that Jim McGuinness’s Donegal won just four of the 12 McKenna Cup games they played – and that didn’t turn out too shabbily.