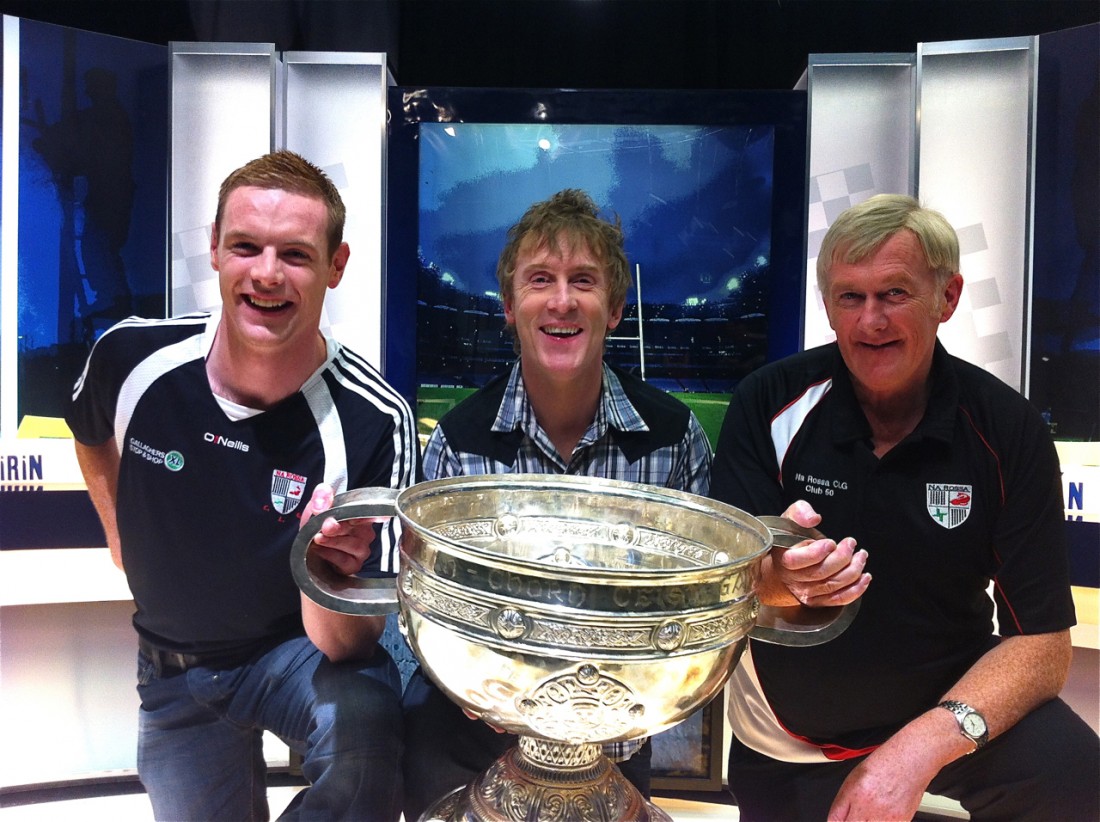 Pat Boyle – pictured right with Odhrán Gallagher and Hector during the 2012 quiz on TG4 – who will serve as Na Rossa secretary for the 33rd year in a row.

LITTLE do they realise around Dooey these days, but the Na Rossa club is indebted to Packie Bonner, the former Celtic and Republic of Ireland goalkeeper.

For it was Bonner’s move to Celtic in May 1978 that ultimately played an integral role in Pat Boyle joining up with the Na Rossa club which was just two years old at the time.

Last Friday night in Lettermacaward’s Gweebarra Bar, Na Rossa held its AGM and, for the 33rd year running, Boyle was elected as the club secretary.

Na Rossa have only had two secretaries in the club’s lifetime with Boyle succeeding Johnny Doherty in 1982. At that time, Boyle was still a player at Dooey, something that came about by way of Bonner’s big move to Jock Stein’s Celtic from Keadue Rovers.

“Noel McCole was playing for Dungloe at the time and was the county goalkeeper so when Na Rossa formed in 1976 Packie Boyle came in to be the goalkeeper – there were no boundaries as such in place in those days,” Pat Boyle says.

Four years after he began as a goalkeeper, Boyle took up an administrative position when he took over as secretary.

He says: “It’s a very small area – I’d say one of the smallest club areas in the country – and there was no-one else who wanted the job. I was the only one interested. I never saw myself in it this long. You need to have a liking for it and it was just a natural thing really.

“I am from Dungloe, but as I say there were no boundaries – which is probably one of the reasons the club was called Na Rossa. The club ended up in Lettermacaward sort of by accident. The first pitch was in Maghery, where Strand Rovers are playing now. It wasn’t big enough to play Gaelic football on and the club would’ve had to buy land.

“Gaelic football played in Lettermacaward in the 1940s and 50s; the team was called Gweebara Rovers and they played in Dooey. That field was no good for grazing so it was made available to the new club, Na Rossa.”

As well as being a club secretary for an era that is well into its fourth decade, Boyle has been Na Rossa’s county committee delegate since the early 1990s.

He says: “I hated going at first, but it actually got to the stage where I hated missing!”

The work of a club secretary has changed so much since Boyle first picked up the pen and paper at the 1982 AGM.

He says: “In my first year as secretary only one game was changed and that was because of a death, but now clubs are getting games off for holidays, stag parties and what have you. Dealing with fixtures is one of the biggest parts of a club secretary’s job now.

“The obvious chance is the technology. The email is a huge help. There was a time when Noreen Doherty (the former county secretary, now county administrator) must have thought she did nothing but lick stamps!

“For player registrations it used to be that you’d have to do a triplicate: One copy for the club, a copy for the County Board and the main one to go to Croke Park. I dread to think what the storage room in Croke Park was like for that stuff.”

Sadly, Boyle’s work on registrations has diminished for another reason, too: Emigration. At last week’s AGM, it was mentioned that Na Rossa had just 22 senior players for the new campaign. Boyle is optimistic that a crop of young players can emerge to take up the slack, but there is no escaping that these are lean times in the area.

Boyle says: “We had a bad slump and we fell down the divisions to Division 4 where we are now.

“We’ve been badly hit since the recession and we have no reserve team anymore. We do have a great group of young lads coming through who have been at the ‘Comp’ in Glenties together.”

Employment is not what it once was and Boyle cannot but mention the opportunities given to the youth of the area by Michael Duddy’s  business installing fitted kitchens and wooden floors.

He says: “At one time I would say he employed 80 per cent of the Na Rossa players and only for Michael there’d have been no dressing rooms in Dooey.”

Na Rossa have had their moments in the sun, though.

Around Boyle’s time joining the club, five brothers were emerging as leading lights in the club. The influence of Sean, Michael, Declan, Donal and Aidan Bonner can still be felt in Dooey.

Donal, at just 15 years of age, scored 2-1 in the 1982 Donegal Junior Championship final, when Na Rossa beat Gaoth Dobhair 3-4 to 2-6. A bad knee injury would scupper Donal’s advancement, but he remained a key figure for the club side who were beaten by Glenfin in the 1983 Intermediate final.

“The five boys basically became the backbone of the club,” Boyle says.

“The club had a great manager at the time, Brian Cannon, who was the postmaster in Leitir up until last year. They were in senior for a while, but came back down and won the Intermediate in 1989, beating Naomh Ultan in a replay and we won the Intermediate again in 1999 when we beat Malin.”

In 1992, Declan Bonner helped bring Sam Maguire to Donegal for the first time and the bonfires burned proudly when the flame-haired forward took Sam into his home club.

“Ah, that was such a proud moment for the club,” says Boyle. “Declan has given so much to the club and is the Chairman now.

“It’s not often you see former players coming back to put in what he does, even though he’s the county minor manager.”
Boyle won an All-Ireland of his own in 2012.

Alongside Odhran Gallagher, he represented Na Rossa on the TG4 quiz show ‘Ceist le Hector’. With TG4’s Micheál Ó Domhnaill as their captain, they won the top prize, earning Na Rossa a weekend at Carton House.

The light flickers as bright as ever for Boyle, who harbours hopes of a rise from the ashes for the club’s senior team.

“The big ambition would be to get out of Division 4.  It’s probably not a bad thing for these young players to be starting off in Division 4.

“Hopefully we will get out of it soon.”