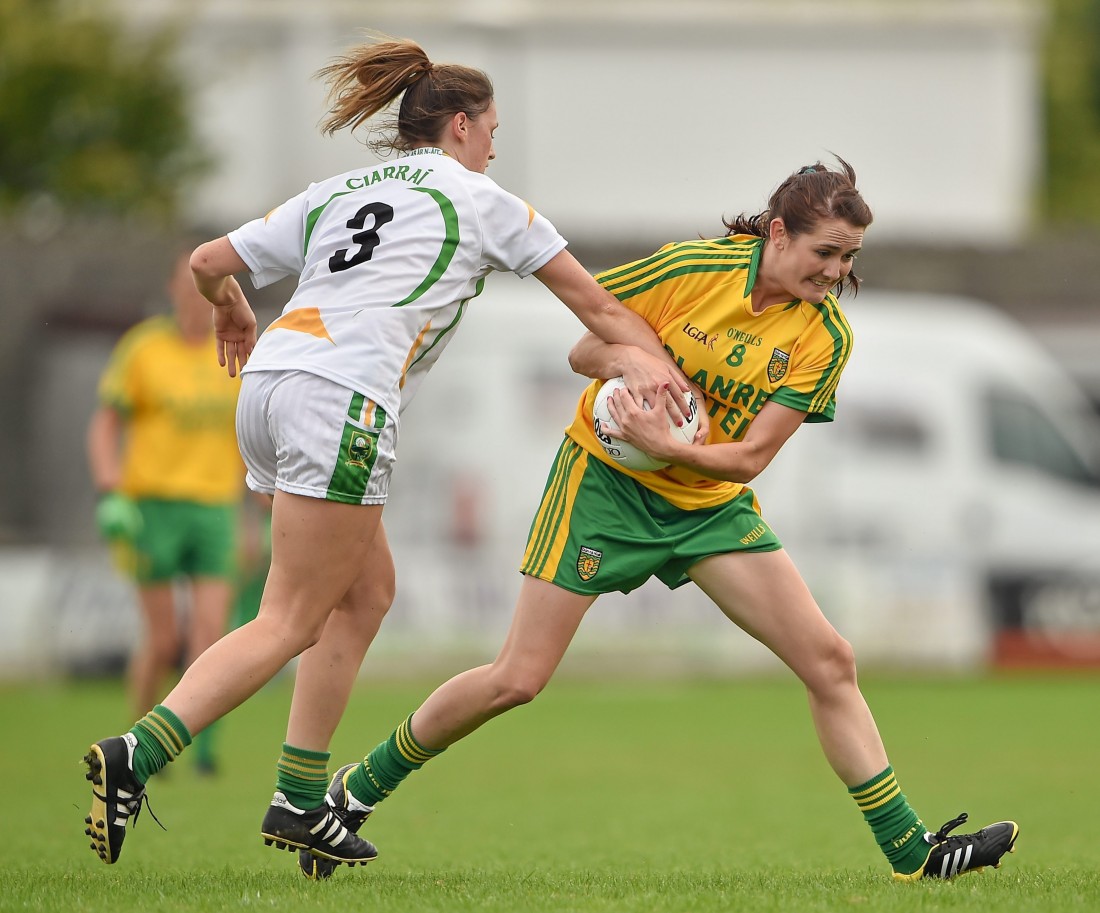 NEW Donegal ladies captain Katy Herron enters the new campaign with a spring in her step.

Herron was the Donegal ladies footballer of the year in 2014 and has been handed the captaincy by manager Davy McLaughlin for this year.

She leads the team out for the first time on Sunday when they face Ulster champions Armagh, a game that happens to be at her home ground, Pairc Taobhoige in Glenfin.

“It’s massive to be the Donegal captain,” Herron said this week.

“I’ve been there now since 2010, but I’m sure there’ll be a bit of pressure now being captain. I just hope the performances come off after last year. I’m just delighted to be made captain. I feel like I’ve put in a lot of work. We all have as a team.

“We’re coming off a lot of defeats last year, but we’re positive coming into this year.

“I can’t wait for Sunday now. It’s great to have it in Glenfin, too. We didn’t know if we’d get the pitch, but myself and Karen (Guthrie) just tortured Danny (McGlynn) until he agreed!”

2014 was a tumultuous year for the Donegal ladies.

Relegated from Division 1 after new manager Margaret Foy stepped down from the job after only five weeks, members of the Ladies Board took charge for a time before McLaughlin saw the opening and went for it. McLaughlin brought with him a Tyrone trainer in the form of Sean O’Kane and also has John Hession, Robbie O’Donnell and Alan O’Connell on his backroom.

Although Donegal were beaten by Armagh in an Ulster semi-final, they put up a brave and gutsy display against Kerry in the All-Ireland qualifier, but were pipped in extra time.

Herron has been on the panel since 2010, joining in time to get an All-Ireland medal with the county in her first year, and the performances of the teak tough Welchtown woman were one of the highlights of last year. Traditionally renowned as a full-back, her sentry was moved last year, but she took to midfield superbly.

“Last year was a brilliant one for me,” she said.

“I got move out the field and didn’t know what to expect – there was a lot more running to do than I thought. It was a good year, though. I was doing a lot of training myself and overall there are a lot of things we can take from last year.”

Donegal will be missing the precocious talents of Termon sharpshooter Geraldine McLaughlin, who is awaiting knee surgery, but the Tir Chonaill girls have been boosted with the return of some big players.

Aoife McDonnell, captain of the 2010 All-Ireland winning side, is back from a spell in Australia, as is Niamh Hegarty. Alanah McDonnell and Deirdre Foley are two others back in the fold, while Glenfin’s Yvonne McMonagle will be back in a couple of months to boost the attack.

From the All-Ireland winning Termon ladies side, Donegal call on Shannon McGroddy, Laura Gallagher, Nicole McLaughlin and Emer Gallagher. Geraldine McLaughlin sits out for a time with a knee injury and Roisin McCafferty is a likely addition later in the year.