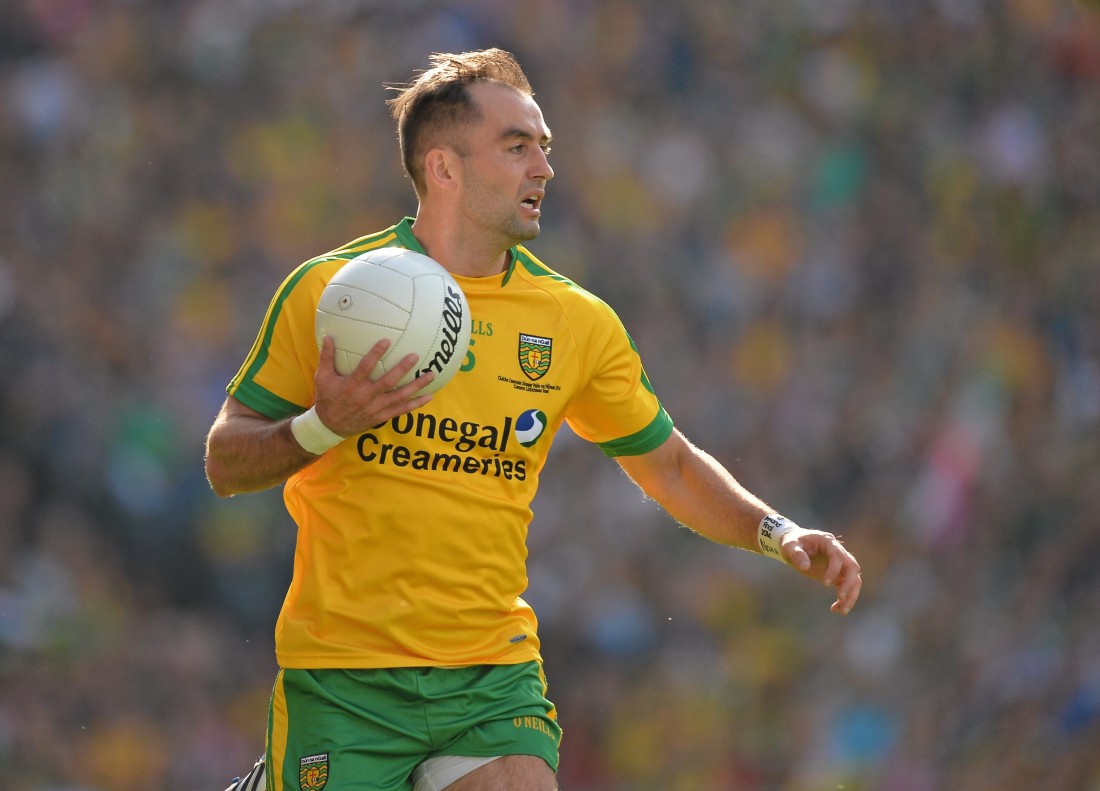 KARL Lacey looks set to return to action on Saturday-week when Donegal begin their National League campaign against Derry.

Lacey has been waiting on the wings for a slice of action during January, but new Donegal manager Rory Gallagher has kept the 2012 Footballer of the Year’s powder dry so far.

However the Four Masters ace seems certain to be back at the coalface next Saturday, January 31, when Donegal host Brian McIver’s Derry at Sean MacCumhaill Park.

“Karl will definitely be ready for Derry,” Gallagher confirmed to the Donegal News this week.

“He could have got in for us already, but we’ve not rushed it because we want him to be right for us in the League.”

David Walsh (hip), Colm McFadden (foot) and Neil McGee (foot) are the only three members of the panel who have yet to be integrated into ‘full’ training, although none of the trio have been ruled out of the Derry clash.

Gallagher said: “The three lads are training away themselves, but they just haven’t joined the full group yet. They’re making really good progress.”

Odhrán MacNiallais missed Sunday’s win over Fermanagh in Ballyshannon because of ‘a niggle’, but the Gaoth Dobhair man can be expected to resume training this weekend, while Darach O’Connor made his first appearance of the year on Monday night when Donegal overcame Sligo IT 0-12 to 0-10 in a challenge game, the Buncrana clubman having been down with ‘flu.

Gallagher said: “It was good to get Darach back in action again. I’d like to have had him in for the McKenna Cup games, but he just missed out on those. It’s great to have him up and running now.”

Patrick McBrearty featured last weekend for UUJ in a challenge game against Slaughtneil and will also be in the frame for Derry, as will 2014 Young Footballer of the Year, Ryan McHugh and Anthony Thompson is expected to put in his first appearance following the confirmation last week that the Glenties native would commute from England for the League.

After the Derry game in Ballybofey, Donegal take on Dublin at Croke Park on Saturday, February 7.

Gallagher said: “We’re taking the first two games, Derry and Dublin, as our first block in the League. That’s all we’re looking at for the time being.

“Every game we go out to play, we’ll be going out to win it. The feeling of winning with a team is so big. You can’t buy that. It’s hard to beat the feeling of grinding out a League victory in the spring. You feel as if you’re making progress.”

During the three-week National Football League break in mid-February, the 2014 Donegal squad will be jetting off to Dubai for a week on the team holiday.