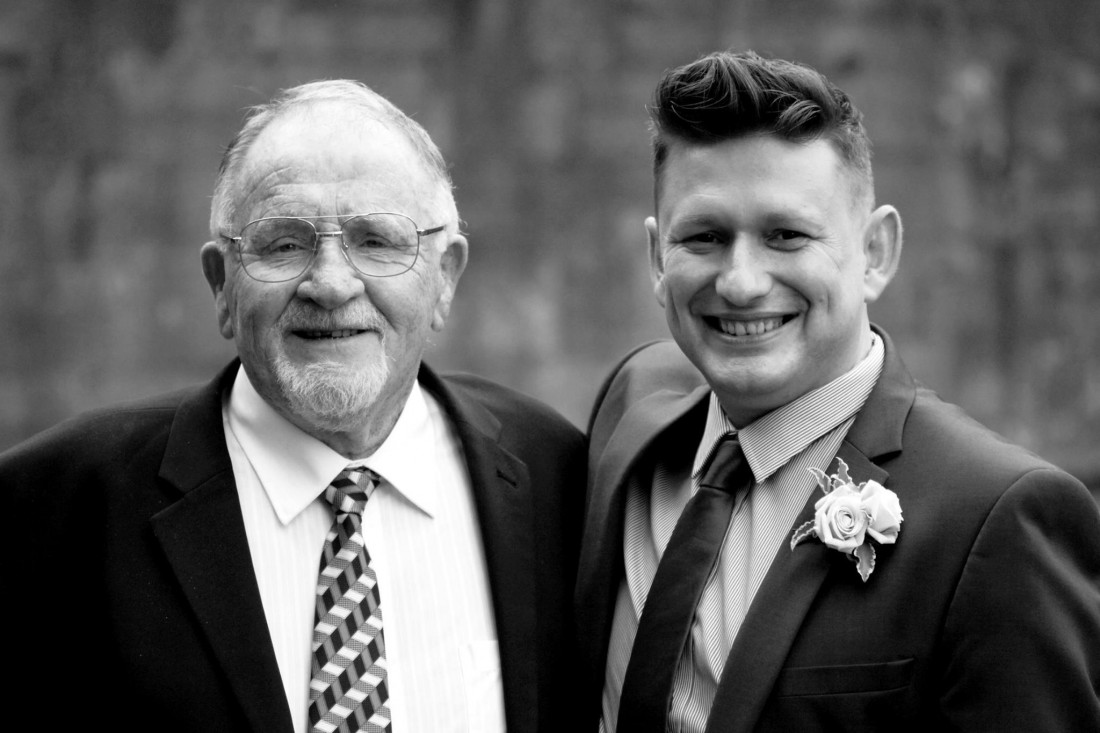 Jamie Gallen (left) with his friend and curator, Gregor Johnstone.

AFTER being diagnosed with terminal cancer and only given one year to live, a Killygordon native discovered a hidden talent after wandering in to an art room in his local hospice.

Jamie Gallen (71), from the townland of Ardnaganna, emigrated to Scotland when he was 17 and has spent most of his life there since.

The retired gas engineer, who now lives in Govanhill, Glasgow, caught the creative bug in the most unlikely place – at the Prince and Princess of Wales Hospice.

He was only diagnosed last January with terminal lung cancer and given twelve months to live. However, he has painted a dozen canvasses since March and experts have compared his works to Ben Nicholson or early Piet Mondrian landscapes.

In the coming weeks, Mr Gallen will hold an exhibition in the gallery at the Old Hairdressers pub in Glasgow.

Speaking to the Donegal News on Wednesday, he said he never painted before in his life and was surprised at the reaction to his work.

“After I was diagnosed, I was asked if I wanted to go in to a hospice and the Prince and Princess of Wales was the nearest one to me.

“I walked in to the art room one day to see what was going on and one of the girls, Jenny Pearson, asked me to give it a try, so I did,” he explained.

“I took to it immediately thanks to the encouragement of the staff. My stuff was compared to Ben Nicholson or early Piet Mondrian, but I had never heard of either of them before. I just look at a picture, profile it and put my own input into it. They (staff) said I was a natural but, to be honest, I haven’t a clue what I’m doing.”

Mr Gallen said his only attempt at art before was sketching for his three daughters when they were young, but painting was “something I always wanted to do.”

While he has not offered any of his works for sale to date, he refused an offer of £700 for one painting as he has promised it to his friend who is curating his exhibition – Gregor Johnstone.

“He is very, very talented. I love his paintings. Since I’ve been working with Jamie I’ve seen him grow in confidence. He’s just amazing, really inspiring,” she told the Evening Times in Glasgow.

“His style is very expressive. His work reminds me of Ben Nicholson or early Piet Mondrian landscapes.”

The Glasgow School of Art graduate has worked with cancer sufferers and their families for more than a decade.

“We’ve been here since 2003. Prior to that there was a pilot project in 2001 which ran for twelve weeks. It became quite important to the people that accessed it and they campaigned to have it returned.

“The hospice listened to that and this was the first project to provide arts provision in palliative care in Scotland.”

“What we try and do here is encourage and support people to make art which is from them. We usually see about eight people a day and we’re here four days a week.

“We have had a number of exhibitions over the years but Jamie’s will be the first solo exhibition.

“I can’t wait until the end of January. It’s very exciting.”

The son of the late Francie and ‘Big Annie’ Gallen from below the Cross village, Mr Gallen has travelled all over the world with his work since leaving Donegal.

All of his six brothers and three sisters also emigrated, however, his brother Charlie returned to the family home in Killygordon before his death eight years ago.

While a terminal cancer diagnosis is most peoples’ worst nightmare, Mr Gallen is taking it all in his stride.

“When I was diagnosed, I was told that, at best, I would have one year to live. But, it is just one of those things, something is going to get you in the end up. We don’t get off this earth alive after all,” he laughed.

“It’s tougher on the family than it is on myself – I’ve accepted this is the way it is for me. It’s no good saying ‘why me?’ as a lot of people get cancer. Why not me?”

Mr Gallen’s exhibition will be held in the gallery upstairs at the Old Hairdressers pub in Renfield Lane, Glasgow on Sunday, January 25.

As the old adage goes, it is never too late to learn, even after being admitted to a hospice.

“I don’t know if anyone will want to buy them. I really just want to show people that you don’t just go into hospices to die. You can still have a life if you want to,” he concluded.

For full report, see the print edition of the Donegal News or subscribe to our digital edition.