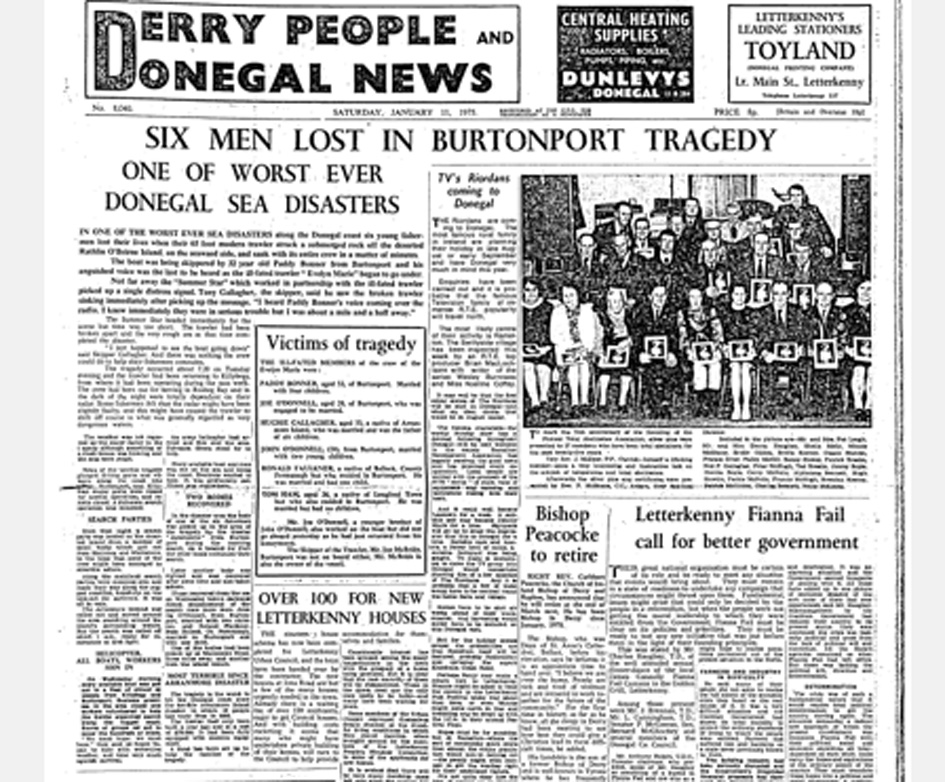 How the tragedy was reported in January 1975.

A SOLEMN Mass will be held in Burtonport next Wednesday to mark the 40th anniversary of the sinking of the ‘Evelyn Marie’ which claimed the lives of six young local men.

The one-year-old trawler hit rocks and sank almost immediately at Rathlin O’Byrne island, off Malinbeag, Glencolmcille, at around 7 pm on January 7, 1975, as she made her way back to Killybegs.

The Mass will be held in St Columba’s Church at 3pm, when it is expected that representatives of all families will be present. While members of the public are welcome to attend, a representative of one family asked media not to attend and to respect their privacy.

A note in this week’s Burtonport notes read: “As we sadly recall, the parish lost six outstanding young men from our locality in the terrible tragedy.”

According to a report in the Derry People/Donegal News from the time, another young man worked on the boat, but did not go aboard as he had just returned from his honeymoon.

It was also reported the skipper and owner of the trawler, Mr Joe McBride from Burtonport, was not on board either.

In the days after the disaster, the bodies of two of the fishermen, Joe O’Donnell and Rolo Faughnan, were recovered. One was recovered from the sea and the other was picked up at Malinmore Head, three miles from the scene.

Despite requests from the families, the government refused to release a file on the disaster.

Ironically another Burtonport-based trawler, the Carraig Rua, struck rocks and went down at the same spot on November 26, 1976, and five lives were lost. The inquiry into this disaster also remains secret.

See today’s print, or digital, edition of the Donegal News for full report.