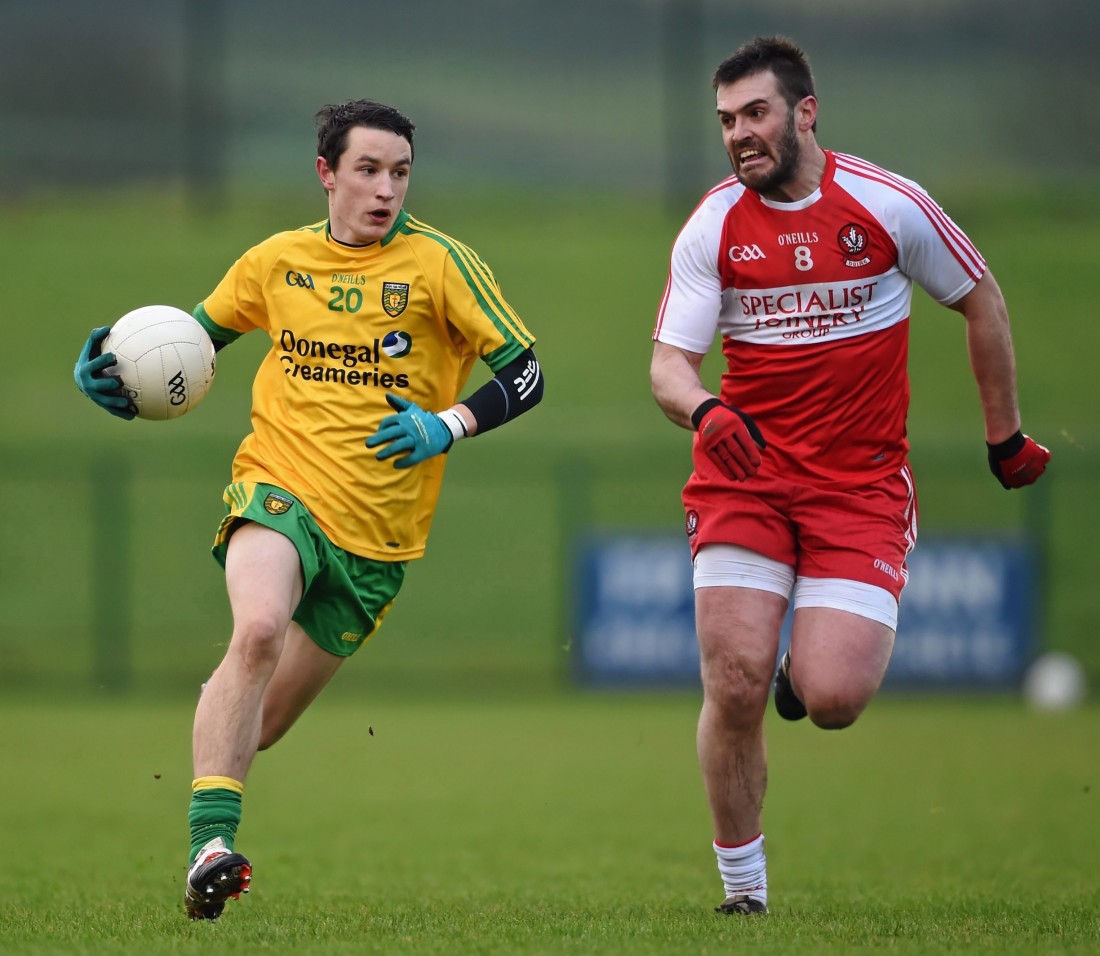 Eoin McHugh in action against Mark Lynch, Derry, in the Dr McKenna Cup.

EOIN McHugh will miss Saturday’s National Football League opener against Derry due to a virus.

The 20-year-old had been tipped for inclusion after impressing during Donegal’s McKenna Cup campaign. Early last week, the Kilcar man picked up a viral infection and is expected to sit out the opening two League games against Derry and Dublin.

McHugh hasn’t been able to train since playing in the win over Fermanagh in Ballyshannon last Sunday and must now wait to make his League debut for Donegal.

Brian McIver’s Derry are in Ballybofey to provide the opposition for what is Rory Gallagher’s first League game as the Donegal manager, a fixture that will be televised by Setanta Sports (throw-in 7pm).

“Saturday night’s game now is the culmination of a month’s work. It’ll be nice to get up and running; I’m looking forward to seeing where the players are and it’s a good challenge to start us off.”

However, Odhrán MacNiallais should make his return to action tonight when Donegal play an in-house game at training while Karl Lacey has returned to training and is likely to be in contention for a place in the team for the weekend.
Gallagher said: “We’ll monitor Karl during the week and see how he’s fixed to play some part.

“We’ve a few boys who are struggling with niggles, but they’re nothing major. Eoin will be missing, too, but other than that we’re grand it it’s not a bad selection headache for me to have.”

Ryan McHugh and Patrick McBrearty were college-tied for the McKenna Cup, but the Kilcar duo return to the Donegal squad this week. 2014 Young Player of the Year McHugh will line out for IT Sligo against Queen’s on Wednesday night in the Sigerson Cup.

Gallagher has appointed Eamon McGee and Karl Lacey as vice-captains for 2015 with Michael Murphy continuing as captain for the fifth campaign.

The Donegal manager said: “Michael is a major leader for us. He had a minor injury recently, but we’ve got him back right again. He’s the perfect captain for Donegal.”

There are not likely to be too many newcomers in Gallagher’s team this week. The new boss is hoping to hit the ground running on Donegal’s return to the top flight. After Saturday’s clash with the Oak Leaf, Donegal head for Croke Park to meet Dublin on Saturday-week, February 7.

Gallagher said: “It’s important to start well. The way the League is means it’s a sprint and it’s cut-throat.

“We have three daunting away games (Dublin, Kerry and Mayo) and have three derbies at home (Derry, Monaghan and Tyrone), not to mention playing Cork in there too. Our first aim is to get enough points to keep us in Division 1.

“We’re not looking too far ahead for the time being. We want to be at our best come the summertime, but at the same time we’ll want to get into a winning habit. During the League, we want to see things we’re trying working out.”