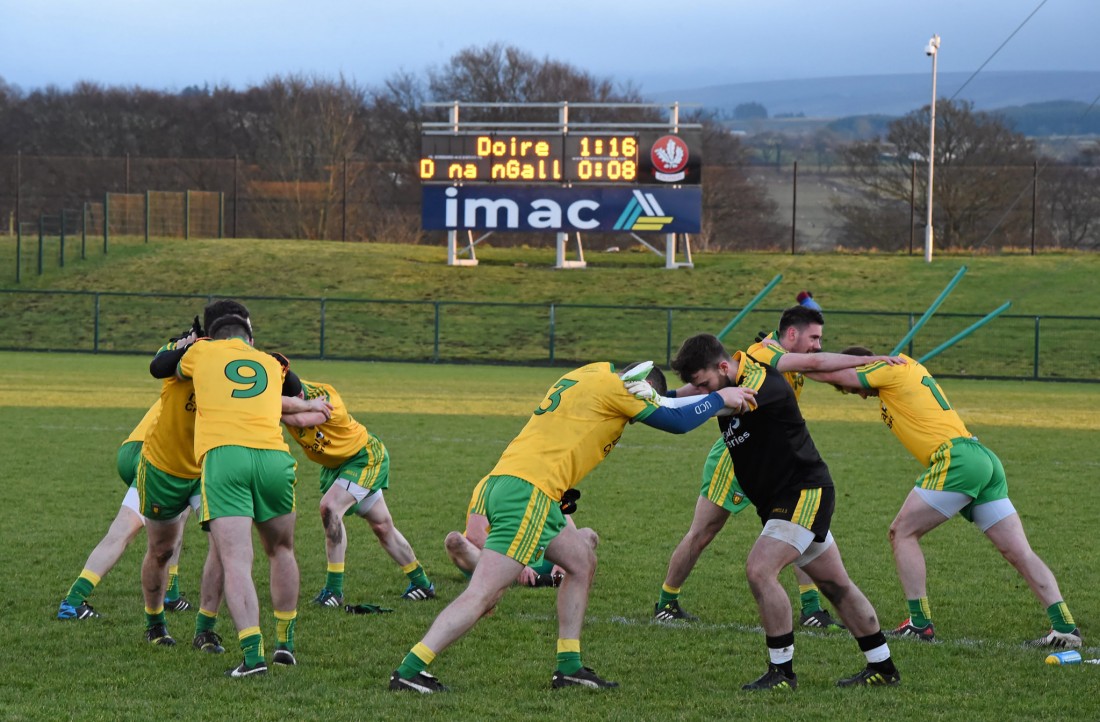 Donegal players warm down following their defeat to Derry.

THE McKenna Cup is all about blooding new players and seeing what players are capable of moving on into the National League panel. The season is now in three stages: The McKenna Cup to blood players for the League; the League to build for the Championship; and nowadays the be-all and end-all of the year is the Championship.

The game against Tyrone will be the game to define Rory’s season. That’s when it really starts, but the work has to be done now.

It’s hard to gauge where the players are at after Sunday’s game in Derry. It’s probably a bit unfair on players coming into a side that includes all new faces, bar two or three. Rory’s hands were tied with players pulling out with flu so it was a very inexperienced side that took to the field.

One thing that struck me right away was the sheer physique of the Derry team. They were much more physical than Donegal. That doesn’t just happen overnight. Those players who have been on the squad for the last couple of years now have their bodies conditioned to cope with the rigours of the inter-county game. That will take the new players time.

It was difficult to get positives out of the game, but it’s a massive ask for players to lead the line without a lot of experience around them. Derry were just the more seasoned squad and the better conditioned – but at the same time there isn’t really a big worry about Donegal either when you bear in mind the calibre of players that have yet to return.

It’s hard to say if we’ll get two or three players again like we got Darach O’Connor and Odhrán MacNiallais last year who were fit to come from a McKenna Cup squad and play integral Championship roles.

Mark McHugh is back involved again and has a fair bit of work to do – but he’ll get there and will be a big addition. Eoin McHugh is another player who should be able to make the step up and it’ll be interesting to watch his progress over the coming weeks.

As well as the new players, the McKenna Cup is a big chance for players who’ve been floating around the fringes of the county panel without getting much game time. Dermot Molloy kicked two points and five wides last Sunday and while it wasn’t his best day shooting, he kept showing for the ball which was encouraging. He needs a better conversion rate, though, and he’s a player who will be looking to lay down a marker.

Sunday was a baptism of fire, particularly Eamon Ward who I felt wasn’t protected enought against Emmett McGuckin.

The worrying aspect this week is the talk about Rory Kavanagh, Leo McLoone and Anthony Thompson, or more importantly their inter-county futures. It looks like Rory has played his last game and Leo seems to be taking a break from it, while Anthony is working in London, something that brings obvious logistical issues.

The surprising one for me was Leo. He has been made captain of Naomh Conaill and it looks like he’s set to concentrate on the club scene. Leo had a big Ulster campaign last yeara and will be a big loss, as would Rory who has given this county so much in his career.

One of the most underestimated players in the country has been Anthony Thompson. He was always so consistent and rarely got a roasting. He played the system so well and was always an outlet going forward. Time and time again he’d be the best placed player in a Donegal attack.

Fingers crossed these players will be back for the League.

No country for footballers

I THOUGHT it was a very good interview by Joe Brolly during the week on Newstalk.

While I wouldn’t agree with all of the points that Joe made, I have to say it’s a worry that these same points and problems are brought to the table every single year and nothing is ever done about them. It doesn’t change and I don’t think it’ll be any different this time next year: We’ll still be talking about burnabout, about fixtures congestion, blanket defences, black cards and what have you.

One thing Joe touched strongly on was the demands that are currently being placed on players. Those demands, I feel, will get bigger and bigger.

“We’ve a real problem on our hands because we’ve got all these young lads between 20 and 30 drifting between scholarship to scholarship.

“The ethos we’ve allowed to develop is win at all cost.”

Teams that weren’t in the gym are now in the gym two and three mornings a week, even players at the lower end of the scale.

What happens is you are in a situation where you have a heap of manufactured footballers.

In Donegal, we’ve used Michael Murphy in a similar role. It almost feels like Clarke and Murphy, and other players of their ilk, are suffering because of their talents. I really fear that the days of these kind of players doing what we’d all love to see them doing, terrorising defences and putting up big scores, are gone – which would be a shame as these players are worth admission fees themselves.

Where once footballers grew up holding nothing but a ball, nowadays they’re spending more time in the gym and it has to take away from the natural ability. The players who will survive now are the guys who are bulking up and who are fit to get up and down the field.

I WAS in Owenbeg around an hour before Sunday’s game and got a tour around the place.

At a time when Donegal teams are on a tour of the county looking for pitches, you really have to take your hat off to Derry for what they have in Owenbeg.

Work needs to be done and quickly to finish Convoy because we’re light years behind Owenbeg and Garvaghy in Tyrone. We’re so far off it’s scary.

Wouldn’t it be absolutely amazing if we had something similar to Owenbeg in Convoy? It’ll take money – but those sort of facilities are just imperative in this day and age.

ARMAGH v Tyrone is one of the biggest rivalries in football – and the 8,500 at the Athletic Grounds wasn’t really a surprise when you consider it was Kieran McGeeney’s first game as Armagh manager and all that has gone on between the counties. I’m sure the Ulster Council wouldn’t mind a rematch between these two in a McKenna Cup final.

THE appointment of Liam Bradley as the new Malin manager this was a real bolt from the blue.

Fair play to Malin. They are a progressive club who have clear ambitions. They deserve to be in Division 1 of the League and probably have their eye on making inroads. If someone is going to take them onto the next level then someone like Liam Bradley might just be the answer. He has so much experience and could be the man to unlock Malin’s potential.

Get in touch with Declan – d.bonner@donegalnews.com