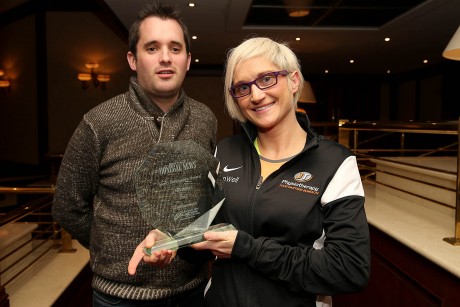 HER chance at the big time seemed gone, consigned to her dreams as a young athlete in Tullamore, but last month Ann Marie McGlynn made the most of her renaissance, captaining the Ireland women’s team to a bronze medal at the European Cross Country Championships.

McGlynn had a six-year hiatus from athletics until her return to the sport in 2012. Initially the competitive instincts weren’t there – ‘I just went out for a run’ – but the old urges soon returned.

Her crowning moment came on December 14th in the Rila Mountains. At altitude of 1,350m McGlynn and the Irish team looked set to miss out on a podium place. McGlynn knew she needed a big finish. A gritty push in the mud and snow up in the highlands of Samokov saw her finish 46th in a time of 31 minutes and 35 seconds.

“When I crossed the line there was a lot of calculating to be done,” McGlynn, the Donegal News Sports Personality of the Month for December, said this week.

“I just thought we had slipped away. When we went into the mixed zone, the media told us that we had medaled. It was brilliant.”

Led by Fionnuala Britton in sixth and with Sara Treacy finishing 12th and Michelle Finn in 23rd, the Irish were within touching distance. McGlynn’s finish saw them beat France to bronze with just a point to spare.

The Letterkenny AC woman said: “We were in sixth and I was thinking that I’d need to be a scorer.

“When they said ‘third place’ I had to plough on. We were getting feedback all through the race. With about 3k to go, we were in third and slipped back to fourth.

“As Fionnuala dropped back, the team dropped back too. They were shouting at us to just pick off people. I got into fourth scorer and just kept picking people off. I had just passed Siobhan so I knew I was the fourth Irish woman.

“I had a wee bit of a kick and I just wanted it so much. I said it to someone the week before that I had a feeling that we could pick up a medal. I really was confident going in, but I didn’t say that to too many people.

“I knew we had a really good chance.”

But for her little son, Alfie, taking ill with a virus and a collapsed lung in the early months of 2012, she might never have felt the love for running again.
Her head was in a daze and she pulled on the trainers one morning. Having lowered her 5k time considerable, she won silver in the 3,000m at the 2013 Woodie’s DIY National Indoor Championships in Athlone. That was on Alfie’s first birthday.

She made the Irish team for the 2013 European Cross Country Championships in Belgrade and, at 33, she wore the Irish singlet for the first time and came 49th, just a year and a half after finishing 49th in a 5k road race in St Johnston.

She said: “Alfie comes with me to the track and I look at him, knowing at he’s the reason that I went back running again. I never had that get-up-and-go in me. My husband was always asking me about going back running. Something just came to me that day. I just wanted to get out. Everything happens for a reason – I was just meant to come back to the sport.”

She had won junior and underage titles on the track and in cross country while in Tullamore as Ann Marie Larkin. Her husband, Trevor, happens to be the national junior 600m indoor hurdles record holder.

The couple live in Strabane and have a second child, daughter Lexie.

McGlynn initially joined Lifford AC, but is now training under Teresa McDaid in Letterkenny and is indebted to the help of Johnny Loughrey from JT Physiotherapy, who has come on board to aid with strength and conditioning work as well as her physiotherapy.

The support in Letterkenny caught her by surprise when she was given a homecoming in the Cathedral town upon her return from Bulgaria.

She said: “Letterkenny have been really good support-wise. Teresa picked me up at the airport. I had a bit of a cold on the Monday and Teresa was telling me that they’d arranged a homecoming. I was so surprised. They invited people there like my old coach, which was nice. I wasn’t expecting anything. I just kind of thought I’d go back home, put the medal away and get on with being a mum!”

She trains twice a day Monday-Thursday, once on a Friday and Saturday and sometimes twice on a Sunday.

She said: “It’s hard. A lot of it comes down to planning. You have to plan in advance, with babysitters, the times of my runs, say going early before Trevor goes to work. It’s just planning ahead.”
Her story really is fairytale stuff.
“Getting the call to make the team was even a big thing for me because I had been sixth in the trials,” she said of the build-up to Bulgaria.

“I was sick in the week leading up to the trial and it was touch and go whether or not I’d race. I knew I wanted to but I didn’t know if I could. I never wanted to be handed a place; I wanted to earn it. I came sixth and just had to wait and hope.

“When Chris Jones, the national endurance coach, called me and said I’d been picked to be the captain, I was like: ‘God!’

“He told me that I could bring a lot to the table because I’d been a junior before. I like to talk anyway and it actually wasn’t a hard thing to do. It took my mind off racing and it was a nice sideline to concentrate on.”
Next up is the World Cross Country Championships in March, which she hopes to make, while her focus is then set to turn to the 3k steeplechase.